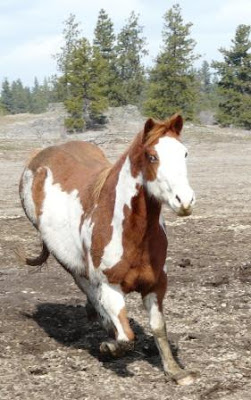 If you have time, check out my guest blog about my horse, Cowboy, at GunDiva's site, Tales From the Trail. That's a fun idea, guest blogging, and she's always looking for more volunteers.

I refer to Cowboy as my MYEI (Make You Earn It) horse, and it's so, so true. My vet used to always say (to be kind), This one would survive in the wild. Cowboy was always thinking for himself.

My opinion is that MYEI horses have become that way from lack of trust. In Cowboy's case, the multiple homes, some early mishandling when his second owner kept him a stallion, but didn't know how to manage a stallion, and then the survival instincts kicked in. They may trust their last owner, but that doesn't mean they trust you. In their minds, not all humans are good, only some. For me, those early days of earning it are over and he has so much more trust--I'd like to think it is also correlating to others, or at least others here at my home. I really don't think he'd do well changing families.

My farrier was out yesterday (the man who really saved his life) and he was pounding a shoe over the old P3 fracture without Cowboy flinching, he stopped a moment and reflected on where we were when we started and where we are now.

He said, This horse was in so much pain when I first met him. I didn't know if I liked him. (Cowboy was a piss-ant that day, squirrely and pulled a plant out of my planter--a large day lily. It was quite a scene. His sweet personality definitely DID NOT shine through. The farrier was also new to Cowboy because we'd just moved here to Spokane, misdiagnosed fracture and all, and he'd been the top recommendation from our new vet.) The farrier had his arm around him, Cowboy's head was almost on the ground--like a big lap dog. Who me? Nah, I was never like that, was I?

I told him what a gift it was to have had Cowboy for two riding seasons since the accident (what I refer to now as post mortem since he was scheduled to be euthanized) and to now be going into my third. I told him how Cowboy has reached his plateau in life--young enough to have the energy and smart enough to know better. The golden years for me and him. And then I said, overly optimistic, of course--I want him to be a grandkid's horse someday.

My farrier brought me back to reality by saying, be glad for every year we get. We've already got more than we figured.

But you know, I can't help being optimistic. He already defied the odds by living through that fracture and coming out sound. I have to believe he'll live to old age, too.

Cowboy has a low nicker, much lower than all the horses in the barn. Only Beautiful's is even close to it. When I go out to see him, he nickers for me every time as he stands alone (always alone) somewhere in the turnout. I know his greeting--I could pick it out from any herd.

That horse has my heart. I know this is Beautiful's blog--but she's the younger sister. Who, I should mention since I've brought her up, got a big compliment from the farrier yesterday. He didn't trim her, but she was turned out. He stopped on the way back to his pickup and watched her and said, That is not the scrawny little horse you brought here. She looks like a real horse now." So, hey, I'll take that compliment for her.

Happy Trails, everyone!
Posted by Linda at 9:37 AM