The process of helping your Mustang to understand you are safe and fair and not to be feared, what we call gentling, is unique to each horse and individual. Because it's unique, you cannot compare your journey to others or expect that your horse should be to a certain place by a certain time. This is the way I did it.

There are many ways to approach gentling your adopted Mustang, from taking your time and being near her and feeding her from your hands as she settles in, to starting right out with the bamboo pole, and everything in between, it will largely depend on you, your horse, and the needs you have.

With Beautiful I felt a need to get right in there and gentle her because she had serious issues with her hooves. Since she’d been rounded up nine months before the adoption, she didn’t get the natural trimming she’d have gotten in the wild. Partially due to her conformation and partially due to man-made conditions after capture, she’d grown upright and one foot was club. We wanted to get in there as soon as it was safe for the farrier to trim.

One of the first things I did was to reach out to the online blogging community, —fellow Mustang lovers —who helped me get in touch with mentors in my area. They were willing to give me as much as I needed to be successful. One of the things I found most helpful were the DVDs, From Wild to Willing, by Kitty Lauman. I knew right away it was her approach, using the bamboo pole, which was going to be best for Beautiful and me.

Unfortunately, I didn’t have a 10' bamboo pole and no one I knew sold them. I made a replacement out of plastic pvc pipe with a stuffed sock at the end. This worked, but it was not nearly as good. It was too heavy, it was floppy, it didn’t have the rings along it and it didn'’t feel as good on her back. Still, I was successful using it as a safe extension of my arm and was able to pet all over Beautiful before I actually got up close and personal. 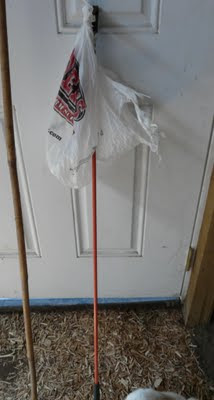 I followed Lauman’s program and shortened my pen down to 24’x24’, just enough room so I could stand in the center and reach her with the arm. It didn’t take too long and I was at her side working on haltering and unhaltering. (She’'d come home with a halter and lead, but worked it off.)

After I was able to halter and unhalter her, I spent a lot of time leading and just standing and petting all over her body, eventually touching down her legs and her feet. From there, I worked on picking them up and rubbing around her belly as I held them. As we progressed, I started to imitate the farrier by pounding on them with a hammer, imitating the nippers, and touching her in tickly areas the farrier might touch as he was doing his work.

For us, Beautiful and I, it seemed like moving fast was the best answer. After a week of gentling she was much more secure and settled in knowing she wasn’'t going to be hurt and she had a safe home. 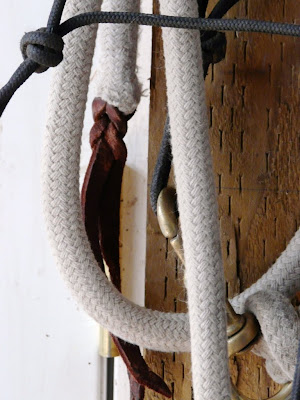