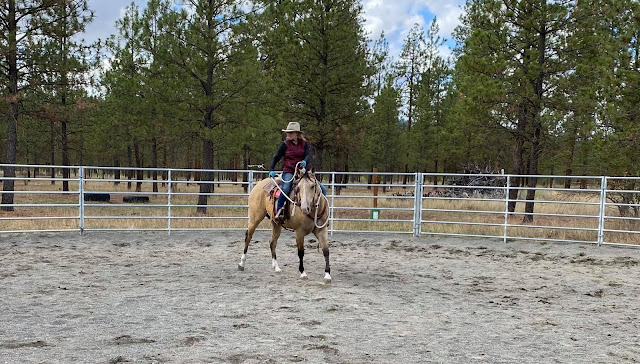 Things were crazy around here when I pulled out yesterday. Something got the horses riled up, and they were all running around like crazy, which scared Tumbleweed as he was loading. Part of me said, abort the mission! But the other side of me said, you can't make everything perfect, and he needs to know he can trust my decision to work today. The latter side won.

When we arrived at the trail head, he was still on edge, but we started our work on the obstacles in-hand. I didn't want to overburden him, since he has shutdown on them before, so I chose only one on which to concentrate. It's the bridge he has gone over 1000 times, but after the teeter-totter bridge, he firmly believes it is a teeter-totter in disguise. Before we can even think about mastering the TT bridge, we need to circle back on this one.

My daughter, who is due any day now, accompanied me. She and I think a lot like when it comes to training, so I bounced ideas off of her as I was working. Too much pressure? Need more? What do you see happening?
The winning approach for Tweed was a little bit of pressure, but lots of reinforcement. At one point, when he committed his front feet, and most of his back momentum, to the bridge, I stopped and kissed his sweet little mouth--which is something I do a lot around here--and he just immediately melted. It paved the way for several successful tries. A little pressure, a little release, lots of kissing. My training method!
After that, we did some work in the round pen and arena, and then rode out to try the obstacles in-saddle.
The Sand Box
The Poles. (This is one is good for teaching him to balance a rider while picking up his legs to maneuver over obstacles, something that still scares him. He seems to be very worried about his balance when we do these obstacles, so I take them slow.)
I apologize for the next one being crooked, but I sent it up to YouTube in the correct position, and it still processed it skewed. The Ladder. Last time I  tried this one with Tweed, in saddle, he refused it. So, this was a big, big win for us.
We did more of the obstacles, like the labyrinth and poles--going in, and backing out, but that gives you a good idea. I'm starting to use the obstacles more as a supplement, rather than an entire session. I'm going to build on them slowly, as he gains confidence.
Today is going to be our first trail ride, and I think he's more than ready. It's a beautiful day, and I'm looking forward to it!
Posted by Linda at 9:16 AM 10 comments:

Now That I've Scared Everyone Off... 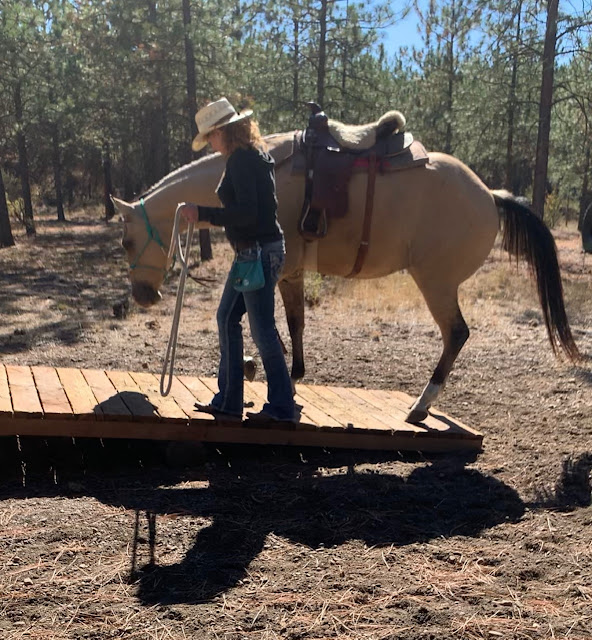 Now that I've scared everyone off from ever giving me advice again >insert laughing emoji<, I would like to shift gears and ask you to share the best piece of advice, or maybe more accurately, wisdom, you ever received.

For me, it was probably the day my vet told me Cowboy was a smart horse because he had a strong survival instinct. I was thinking about it from the negative--he's not a bright horse, because he's not allowing my vet to give him his vaccination shot, and I was making apologies. He turned that back around to the positive so fast my head was left spinning. 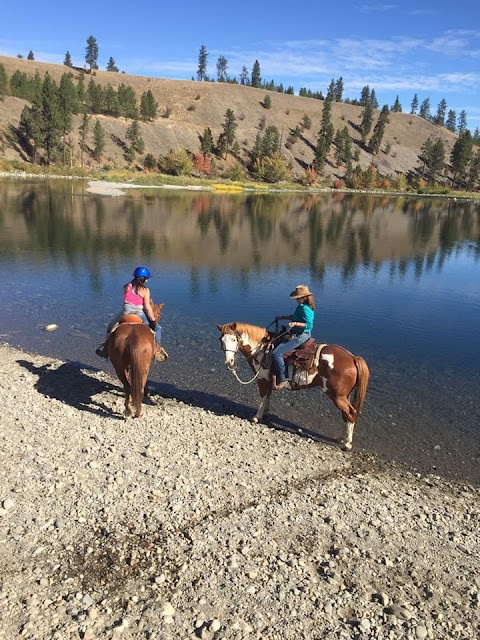 I was Cowboy's fifth owner by the time he was seven, partially because the poor guy had been caught up in a divorce situation. He was also an orphan foal. Cowboy must have thought if he was going to survive, he'd have to take matters into his own hands. When I look back, every blow up, every refusal, everything--was a failure of not meeting that most basic, essential need.

1. Have I done the necessary conditioning / training?

2. Have I earned this horse's trust?

3. Does my horse feel like he / she can communicate their needs to me and have them heard and respected?

4. Is anything I'm doing contributing to my horse's fear and survival instinct?

5. What's the best way I can get this horse past his fear and not make him more fearful?

6. At the end of the day, the relationship is more important than the results.

It took me a long time to get there with Cowboy, and I had to let some things go. He never enjoyed riding in super large groups. He always hated desensitization clinics. He wasn't good crossing water, and always took extra time. When he got it, he'd do it forever, but only that particular water crossing. In all other things, he gave me everything he had--really poured it out and wanted more time with me on the trail.

How about all of you? What is that great epiphany? What piece of wisdom changed everything about your outlook?

Oh, and we introduced Foxy and Epona last night. 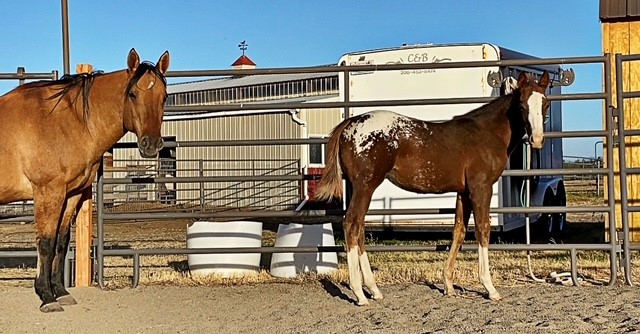 It was extremely uneventful.

Falling In Love With You

Spending time with Tumbleweed at the equestrian area and taking it slow. I don't have an agenda, but I do have a goal of first, getting his whole heart, and second, to be riding those trails and obstacles. We're very close.  I'll know when it's time, because I'll have his feet. As of yesterday, he was still nervous and calling for a buddy. I want him to see me as that buddy. He has gone over the teeter totter bridge twice, but he's still nervous about it. We'll get there. In the meantime, I'm pursuing LoVe, encouragement, and enjoying our journey. 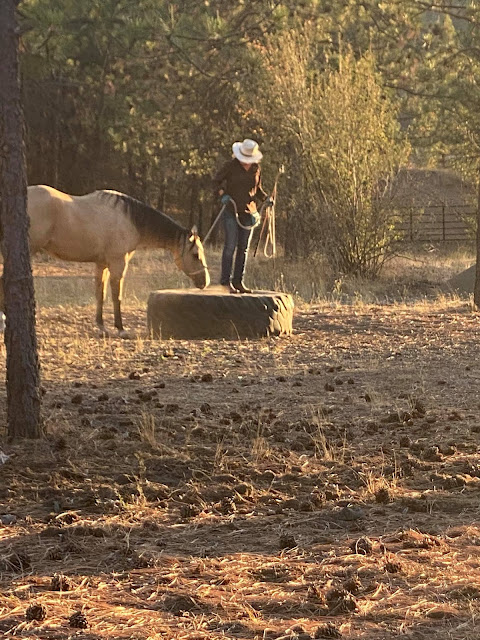 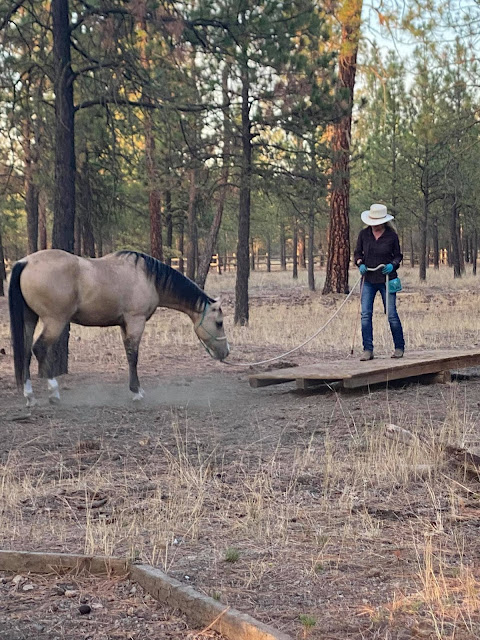 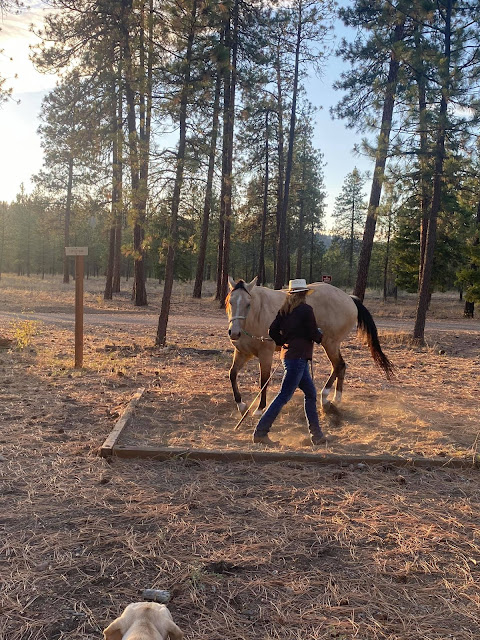 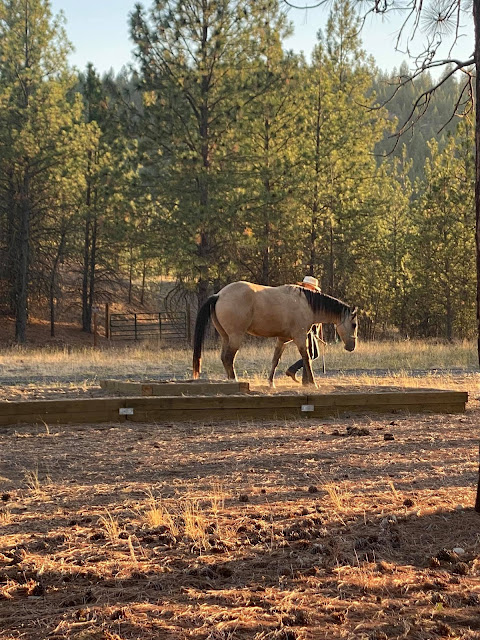 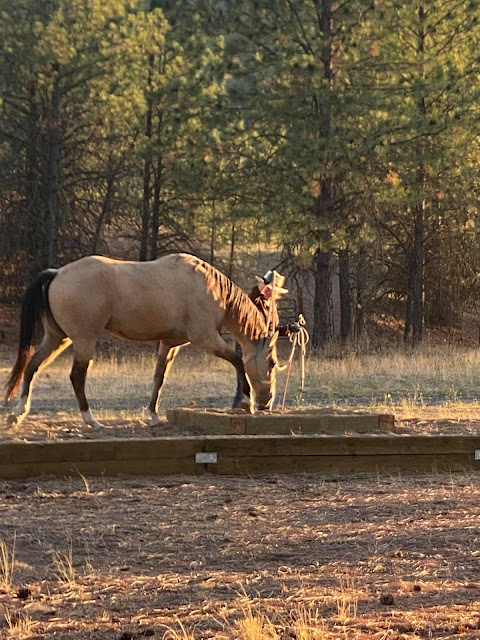 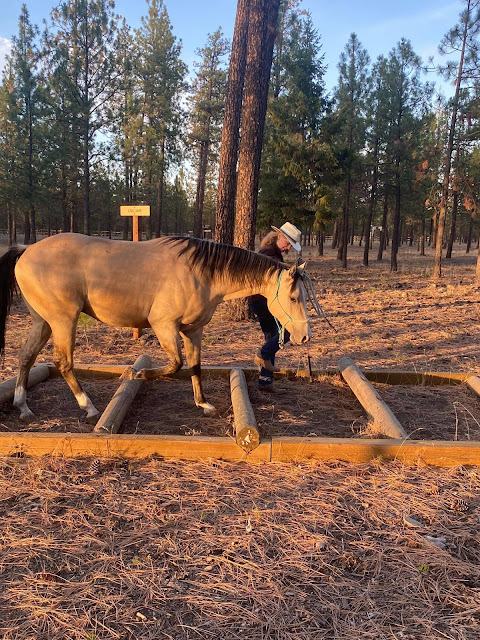 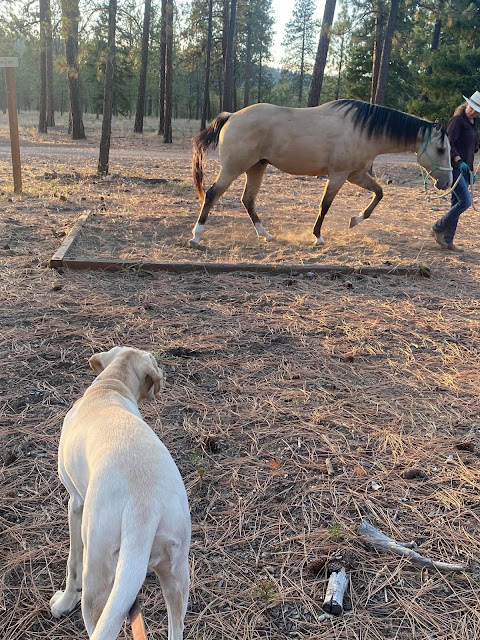 A little wine and cheese between training. 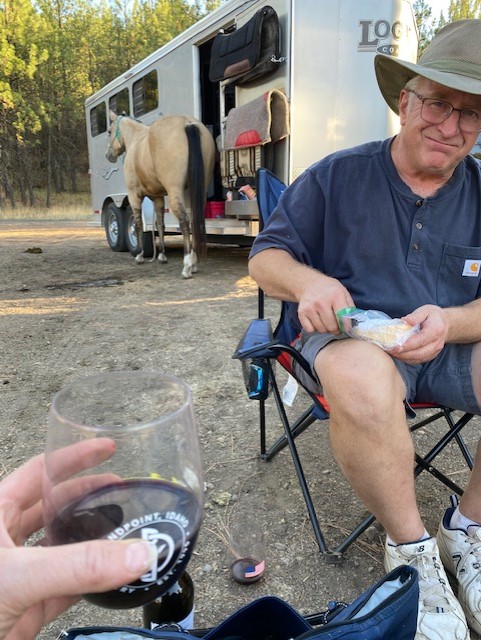 I wish I could say I came up with this philosophy of slow, long day training myself, but I actually stole it from another equestrian. I'd see her at the equestrian area with her horse last summer when I'd go down for rides. She was there everyday, most of the day, and her husband would sit and read a book. I'd see her before my rides, and I'd see her after my rides. She and her horse started out rough, and I didn't know how it would turn out for them, but by the end of the summer, she was riding her mare all over the place, and they had a deep connection. It made me think how like weekend clinics that is--you spend all day with your horse partner, and by the end of the day or weekend, you get this unbelievable bond. My horse camping friends get the same results. There's just something to be said with longer days together.

Update: Epona gets daily turnout with Cowgirl now, and Cowgirl isn't letting her nurse anymore--but we're watching them closely. Cowgirl seems to have turned off the spigot and has no interest in allowing her to assume the position. Epona isn't trying as much either. Good news for an eventual full reunion. 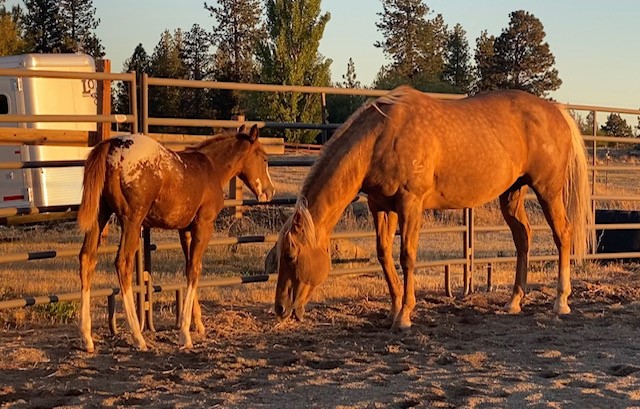 I Wish I Had Time To Bake You a Cake! 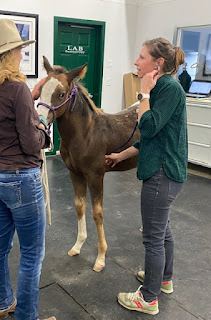 Yesterday was Epona's vet visit, and though we could see a remarkable change in her, we have learned to wait for the bloodwork and diagnostics before we celebrate.

The first thing we saw was that she had gained almost 100 pounds since our last visit. That was a big indicator something was going right. But being healthier also meant being stronger and more opinionated, and Epona was not happy about having her blood drawn. Our vet was impressed with her ground manners, considering she is an "orphan, non-orphan foal," but Epona definitely had spunk, and it made us all very happy to see it.

We loaded her back in the trailer to await the results of her blood test, and when our vet walked out to give us the news, her first words were, "I wish I had time to bake you a cake! --because we need to celebrate!"

There was a feeling of elation among all of us. A heavy weight lifted from our mutual shoulders. We thanked Dr Stein over and over, and she returned the praise to us. It was a team effort with a heavy dose of miracles from above.

Throughout this journey, I would often pray to God out in the barn, "I love her so much, can we keep her?"

His answer was yes.

Prognosis: No more vet visits. She has learned to swallow normally, and they expect her to have a normal life now. As you know, I wasn't sure I'd ever be able to type those words.