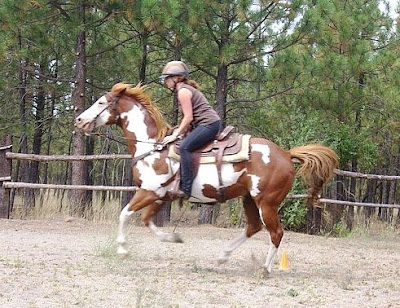 Saturday I may have had the most fun I've ever had on my horse at the club's "Fun Day". (Moms Daughters and Horses) It was a totally laid back, non-competive game day--good-natured and pretty humorous. (There were some pretty nice ribbons to win, though).

I can see where gaming could be a bit addictive--the speed, comradery with your horse, excitement of the game--fun stuff. It seemed like the horses even liked it!

I've never gamed before and had no desire to, but the club thought it would be a fun thing to do with the daughters and a good way to teach gaming. It was.

The only competition we "won"--Cowboy and I--was flags. He's an old hand at sidepassing and trail stuff--so it figured that would be our category.

The area where we need HELP is turning. We took our turns way too wide and it took lots of time off our runs. He could haul on the straight stretch though.

Here are a few pictures the timer was nice enough to take of us. He took about 133 all together--of all the participants--but these are the only ones I think I can share on my personal blog without everyone's permission. The club's forum has the rest of the shots! (Like Flying Cowgirl--who won the overall prize!!) 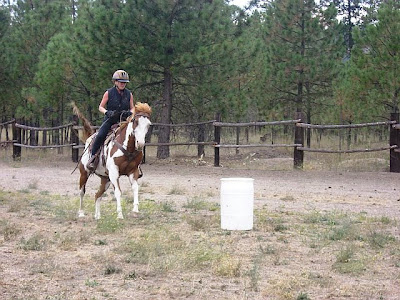 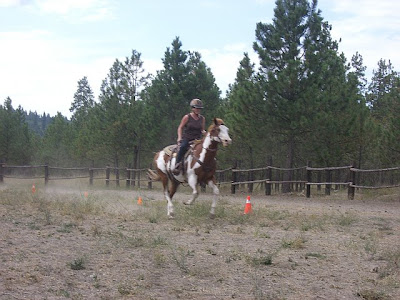 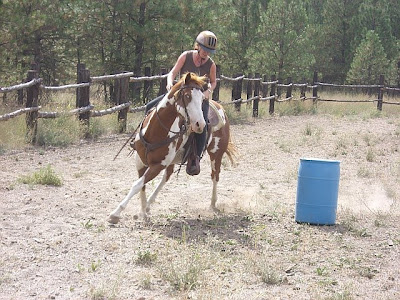 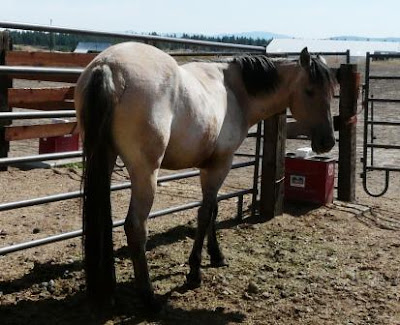 Today the farrier came, and Beautiful did her best ever. She only put her weight down on him once on the back right, but he said she doesn't really know what she's doing. He held onto the foot with the clipper and tipped it up so that she created discomfort for herself, and she corrected.

Then, when he went to the back left (and he really yanks that leg up to his level so they have to be pretty limber) she gave it right to him. She relaxed and let him pull it way up.

Afterwards, as we were evaluating her, he said he was impressed with her ability to think about things. He said that she has really come around and shows a great deal of trust. She has also filled out a little more on the new alfalfa diet.

Earlier this month we worked on stall walls--a little at a time. Eventually we'll do the fronts and then we can have the panels back for a roundpen.

As you can see, this latest addition gives me a place to hang my halters. Back when there was a panel there, Beautiful was a genius at getting her head through and pulling anything within four feet into her stall. 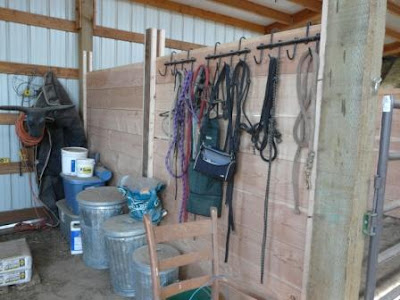 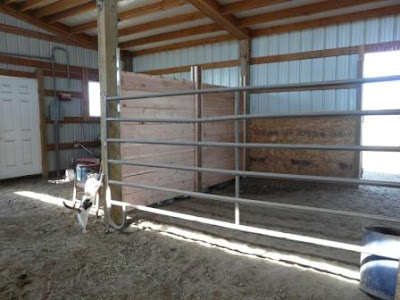 And last bit of news, our next door neighbor has an indoor arena that he has let us fix up to use through the winter! How lucky am I?
Posted by Linda at 1:05 PM 2 comments: 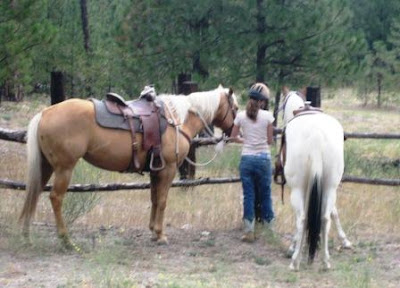 For a horsewoman, a daughter who loves horses is the greatest gift--Shiloh has been a great gift for me. I remember the first time she ever saddled her horse by herself and rode to meet me in the arena. Wow! She was my partner after that day.

She had a couple of geldings she rode to start out, but one day she uttered the words that every horse loving woman eventually says--I want a baby!

Ay yi yi, I've been down that road. You've got to feed them for years with no return, and you don't know how they're going to turn out--if they even survive babyhood at all. It just seemed like a losing proposition.

So, striking a balance, I agreed to let her go down that path as long as she bought the baby with her own money and assumed 50 percent of the financial responsibility for its keep until she turned 18. She would be FULL owner and her horse's life would fall on her shoulders.

She agreed and this is her horse today--five years old. 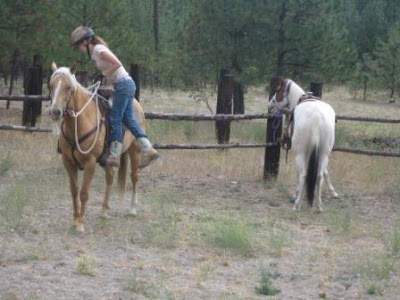 Shiloh found her on Dreamhorse.com as a weanling, so there was a lot to teach this little filly. We made a deal with Shiloh that we would pay half of her training with a professional IF Shiloh did the training alongside the professional.

Shiloh readily agreed, and it turned out to be one of our better decisions because she learned so much in those years with Sarah, her trainer--skills that serve her well now with other horses. 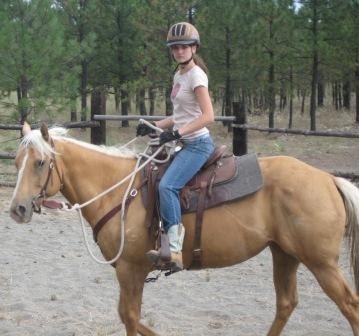 She was supposed to be my partner with Beautiful, but I kind of took that project over. Shiloh doesn't like playing second fiddle to me, so she bowed out of our partnership early on.

But this summer, having my hands full with a busy schedule and lots of horses, Shiloh saw my neglected filly, Cia, out in the pasture, and volunteered to assume her training. 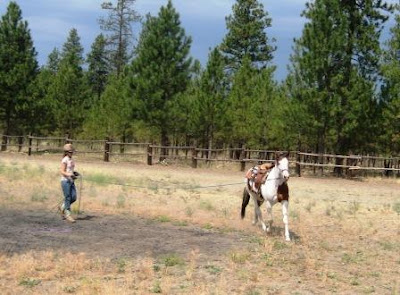 Cia had about seven rides put on her last summer, so she readily accepted the saddle this year--a little bucking on the end of line, but not much. Shiloh was riding her in the roundpen by the end of the first session.

Yesterday, we trailered them down to Riverside State Park to use the outdoor arena. Shiloh is training her filly, Cowgirl, and my filly, Cia.

Here's her girl watching her. 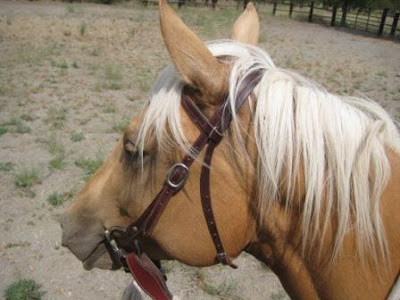 And here's my boy, Cowboy, and her girl, Cowgirl watching. 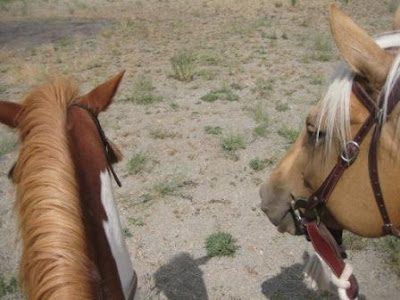 Since being released into our herd, Beautiful has had to learn her place. She was in heat, which caused issues with one of our geldings and a lot of recrimination from the gelding who leads the herd, Shadow.

Shadow has tough rules for the herd. For example, no horse is allowed to enter a stall at feeding time until Shadow has chosen which one he wants. All the other horses are to stand outside. Also, just in case Shadow changes his mind about which stall he wants, all the horses are to listen very carefully for his comings and goings.

Beautiful has not yet learned these lessons and has gotten trapped in tight situations with him. For her sake, I lock in Shadow during feeding time. She's going to have to learn though, because some of these other horses can be brutal. They're not mean, but they have their order--their rules--and the little ones have to show respect.

Beautiful is the baby, and as such, she is the lowest in the herd. She'd probably be above my gelding, Cowboy, if given the opportunity, but that's not saying much--even the pony's above Cowboy.

One thing all this has done is make Beautiful appreciate me more. I've stepped in to move Shadow off when she overstepped the boundaries and it looked like she might get hurt. When her lessons aren't brutal, I usually stand back and let her learn them.

She has had one kick mark on her belly--a swelling the size of a hoofprint, and one bite mark. Other than that, if she minds her place, they are quite sweet with her. Shadow tells her when and where to eat and who to hang out with and who to avoid. If she listens, they graze peacefully together and he watches over her while she sleeps.
Posted by Linda at 8:02 AM 7 comments: