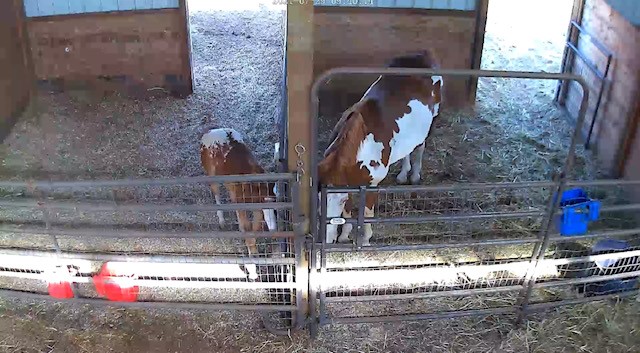 The experience I had the other night with Cowgirl and Epona, her first night back, got me thinking about how much we understand what our horses say. I translated the moment into human language, based upon what I heard from their whinnies, and how they responded to the whinnies. Each was short, and soft:

Each horse was comforted by the other, and each remained calm. I cried tears of happiness to be part of that moment and know what it meant, and how deeply each felt it. I was allowed to be a temporary conduit between them. If not that, at least a witness.

I fully understand that it is a bit of anthropomorphizing on my part, but it's not far off from what they were communicating to each other in that moment. It was a rare glimpse into our shared communication styles However, there is much that remains a mystery to me about how they communicate, and I often miss signals I should have received--and get the interpretation too late.

I was leading Tweed away from the herd yesterday, when he pulled back suddenly, and tried to break away to go back to them. He has only ever done that once before, on one of our long walks away from the herd. I'm always ready for it, but I wasn't wearing gloves, so I did get a teensy burning sensation on my palm. If I hadn't been prepared, it was one of those moments that could have ripped my hand off. I got to his side quickly, setting him off balance, brought him back to me, patted his neck, and proceeded to walk him to his stall.

What did I miss? I think it's safe to guess I missed a lot of signs leading up to it. I've been too singularly focused on Epona and Cowgirl, and not tuning into the rest of the herd.

Last night, I went to work with him at dusk--when it had cooled down. He was grumpy. We did what we needed to do, on the ground, and then I groomed him and returned him to his stall. At that point, I was super tuned into him. I noticed his eyes were hard--a look of worry. Then, I saw that his manure was loose--a possible sign of stress. I responded by giving him Pro-bios, spending time in his stall comforting him, and bringing Foxy into the barn, in the stall next to him, said goodnight, and hoped for the best.

This morning, he was a happier horse, and his manure was forming again. I locked up Cowgirl, who we're trying to keep out of sight of Epona, and let him back out with the herd.

Remember that study a few years ago about horse expressions, and how horses share more expressions with humans than even dogs do? That's pretty amazing. And it gives us a lot to work with when trying to 'Speak Horse.'

I will say this, the few people I know who are exceptionally good at 'speaking horse,' my trainer Sarah, for one, are more quickly accepted by horses. I'm certain our horses take comfort when we begin to understand what they're saying. It reminds me of human toddlers who haven't developed language, but are trying to make their needs clear. Misunderstanding leads to many a tantrum.

I am constantly trying to learn about their language, to earn their trust, and to help them before it's too big, or too late, but it's a slow process. Even when we get it right, the corresponding action--what do we do to address what we see--is equally complicated. Sometimes, when we think we're helping, we're hurting.

I had several auditions for Epona's caretaker yesterday--Cowboy, Tumbleweed, and Leah. By the end of the day, I circled back to Cowboy, because 1/ Tweed isn't ready to be separated from the herd, and it caused him more stress and 2/ Cowboy likes to be separated from the herd, and he loves having his own stall and lots of food. Leah didn't take much interest in Epona, and was happy to be put back out. She may not want to intrude on the Cowgirl / Epona connection.

And here is where it gets weird--anthropomorphizing alert!--I had a talk with Cowboy about being Epona's caregiver. I don't know why, but it just seemed right. He was staring at me, and I felt like talking, so we had a conversation about how he is the perfect guy for the job. He'll get his stall, and his food, and a sweet little companion who needs him. I told him that as an orphan foal himself, he might sympathize with little Epona missing her mama. And I went on and on, like that, with his full attention, and I think, understanding. The tone. The eyes. The intention. It sometimes all comes together in our communication and understanding. After all, if we can understand them, why is it hard to believe they can understand us, too?

At any rate, they spent the night next to each other again, and I saw them being very sweet to each other through the bars of their enclosures. Maybe I'm misreading it, or maybe not. Time will tell.  But I kinda think Cowboy agreed to the terms of  his new employment.