The Perfect Horse, But How Did He Get This Way?

I could go on and on and on--but suffice to say, it's as if he reads my mind--and I his.

But it wasn't always this way.  It was there for the taking, but I somehow got in the way of it.

It began to change for us...

5 years ago, when I took Cowboy to his last ever, "Hell for Horses."

(It's not really called that.  It's called a despooking clinic, but Cowboy hates them.)

He was 20, and I'd been riding the trails with him for 14 years by then--my heart horse--and a pretty damn good boy.  Not perfect, like he is now, but pretty solid as trail horses go.

I thought the clinic would be fun.

"That horse is going to hurt you."

I'll never forget those words of the woman helping us at the clinic.  Cowboy lost his mind, pushed through me--he was pissed---probably for betraying him by taking him there when he was already such a solid boy.

Look at Cowboy's eye in this photo--like, what bullshit is this with the ball on my back? 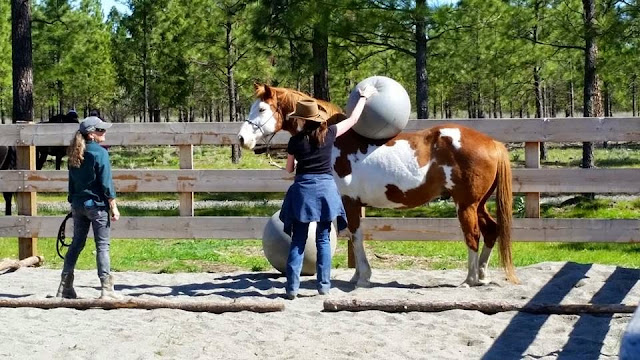 And he proceeded to fight me on every ask--no matter how small. If I said go left, he went right. 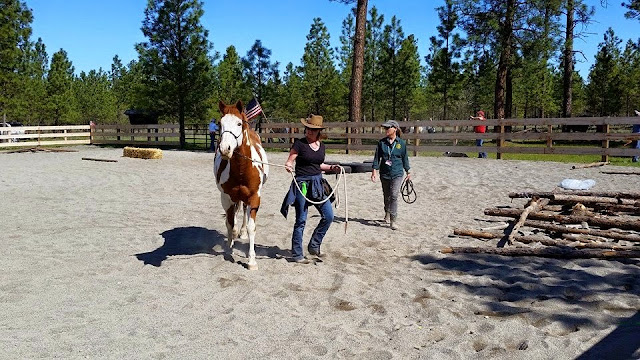 As bad as that day was, it was that clinic that woke me up. I would never again ask Cowboy to do something he didn't want to do.

I realize what I just said goes against EVERYTHING we've ever heard. But I thought, hey, he's 20 years old--he's a great horse on the trails--which is what a despooking clinic is for--and if he doesn't want to be tortured by chainsaws, faux water crossings, car washes--and whatever else humans can come up with to scare him--why am I making him suffer?

From there, it was a logical progression to other things--on the trail--Cowboy, you don't like this--how about this?  At home--Cowboy, you don't feel well enough for a ride today--stay home.  Every little thing between us became a conversation--but it came from a place of trust.  I trusted that his refusal was coming from a real place--not a place of disrespect and defiance. 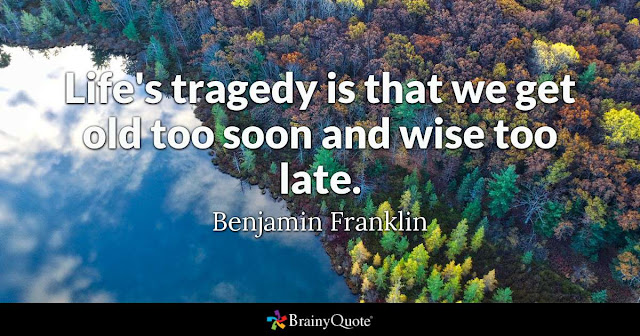 Old too soon, and wise too late.

I've had five years (and counting!) to explore what a relationship with a horse can be--at its best.  It would only be too late if I fail to learn from this and carry it into my next horse/human relationships.

What does it mean to really listen? How much of my agenda would I have to give up? How can listening to a horse's fear also work against the horse? How do I know the difference between giving in from weakness and giving from respect?

I think the answer to all the questions above-- "how do you know questions?" can only be gauged by the results.

Does the listening and giving from you to your horse yield more "yes" answers from your horse, in the long run--or more "no" answers?

If you find your horse saying, Yes, more often--you're on the right path with your listening and adjusting.

But if you find your horse doing what you ask, before you even ask it--you've transcended into something completely different--that special place where the two paths have become one.