What is the "Least" Amount 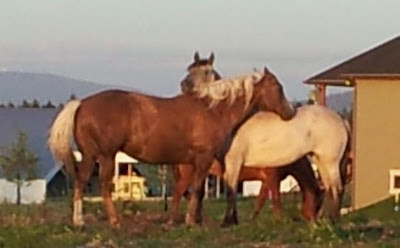 Yesterday was the start of Beautiful's summer training. It was a windy day, lots of clanging and banging, which made it a perfect time to kind of see where she's at right now after having been released with the herd for the last few months. Quite honestly, I didn't know how she'd take being separated from them or even if she'd let me catch her. I went out to the pasture with a completely blank slate.

Of course, she was on the farthest end of the 20 acres with our herd and the neighbor's herd when I decided to get her. Cowboy saw me coming and started walking away; I passed him. (He looked shocked and later that evening came running to me when I went out for evening barn lock-down. I've got to shun him more often.)

Beautiful looked shocked, too. She didn't know what I was there for, but she didn't want to leave the herd, so she walked away from me as well. In my mind I'm thinking, Least amount. Least amount. If it came to chasing her around 20 acres, I'd lose. So, I got as quiet (inwardly) as I can get, spoke to her and raised my hand to her, and she stopped and let me approach and pet her all over with the rope. I took my time, but I didn't hide the lead and halter. I let her see it so she'd know my intention, no tricks or bribes, and I used it to rub all over and under her.

This almost always works for me. I think it's better than going right to their face with the halter which seems to shock them a bit and can make them move those feet. If the feet start to move before they're haltered, you pretty much lose your horse.

She relaxed and let me halter her and then she followed me nicely through the pasture gates, into the barn, and out to the arena with the others whinnying behind her.

Her mind was with the herd, which she couldn't see from the arena. Her ears were tuned into them and, as you know, where they're tuned in, their head and bodies will follow. I asked her for some yielding, then some moving out, and she did pretty good, but at some point decided the game was over and came to a stop. As I tried to get her to move out again, she started backing up--not out of any confusion, but as a way of communicating to me that she was done.

One thing I have to say for her is that she is a good-tempered horse. Nothing she does is mean-spirited. She had a nice eye and was real gentle and pretty calm considering it was loud and windy and she couldn't see her family. She really was trying to communicate with me, and you could see she was plainly invested in our relationship, even though the herd relationship was more vital to her.

I shortened the rope and had her move out in tighter circles and we continued on as normal until we were done. I also roped around her as she stood, "cinched" her up, threw about %25 of my weight on her from both sides and led her around some barrels. When I was done, I took her back and released her into the pasture.

Beautiful is more confident than she used to be. She's also more mature. Being with the herd has done her good. She didn't rear up once, kick out or buck. There was a difference in her eye, too. Used to, she would get a glassy eye where you had a hard time telling where she was mentally. When we adopted her and she was scared to death, it was the first thing I noticed. Whenever she was scared, I'd see it again, but not yesterday. Her eyes were always open and thinking--you could see "her" there. I can't tell you how much more confidence that gives me in moving forward from here. She's at a good point.

My goal for this week is simple. She's herd-bound, as she should be considering she's been running with them for months and doing little else. I want to see her move comfortably in and out of the herd, though, and do her work. I want her attention fully on me.

There are several ways to accomplish this goal, but I'm looking for the least amount to get the desired result. I could separate her from them from here on out and take her in and out for training. Lots of people do that, I've done that, and it works--although it does cause her to be pretty stressed for about three days, and I really don't want to stress her if I don't have to.

So, I'm going to try something new. I'm going to separate her from them for work each day and gradually increase the time she's away from them and see if I don't get the same result with less stress--maybe even in the same amount of time. I guess you could say it's an experiment to find out what is the least amount.

The things I want to do while she's separated are the same things I did last night plus getting her comfortable with the curcingle, blanket and saddle, my weight, ropes around her feet and all over her body, trailering, more work with the clippers and giving her a good bath. That will be a good start to our week.

Today I'm heading out on the trails. It's windy again, but I have several friends and my daughter who are ready to explore, so we'll be doing that in the morning, working BG in the afternoon. Hey, I get to try out my new Cashel riding mask! Pictures later.

Another note on Buck Brannaman, as he makes his rounds to promote the movie, he appeared on The David Letterman Show last night. Here's a link. You have to fast forward to about 26 minutes in to see his interview, but it's wonderful. A nice guy who understands horses and humans and the whole concept of doing the least amount and not getting emotional. And, of course, since it's David Letterman, there are a few laughs, too. This is a horse hair bracelet which was made for me. It's from the hair of my colt (Cowboy's nephew who I'd raised and trained) who died from colic four years ago. I saved his hair for just this thing and finally got it done. It was only $30.00. If you want her information, let me know. I had her keep the hair unseparated like it was in real life. When I saw it, I couldn't believe how much it looks like his tail. A sad memory, but at least I get to carry him next to me in some physical way now.
Posted by Linda at 7:59 AM