Tumbleweed is a Gelding 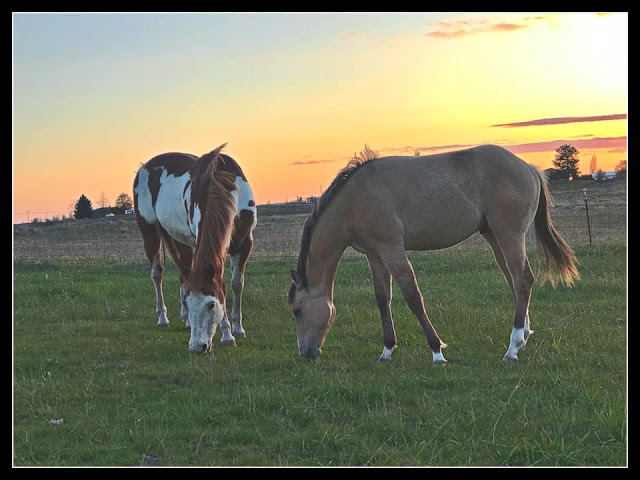 The title gives it all away, but if you'd like to know more about Tumbleweed's journey toward becoming a gelding, please read on.

As you will know from previous posts, Tumbleweed had not "dropped," yet he was starting to exhibit stallion behavior and fly season was breathing down our back.  I felt like a had a small window of opportunity to have him gelded, but I wasn't keen on taking a risk or spending thousands of dollars for an operation to go up and get the testicles.

I made an appointment for sedation, palpation, and ultrasound--and if the testes were easily accessed--a gelding.  Then I said a few prayers and waited ten days for the appointment.

I called my trainer Rebecca for help with loading / hauling practice because I wanted to know all my options.  Haul loose, tied, with a buddy, without a buddy...etc.  She told me if it was her, and he was tall enough not to go under the dividers, she'd haul tied. 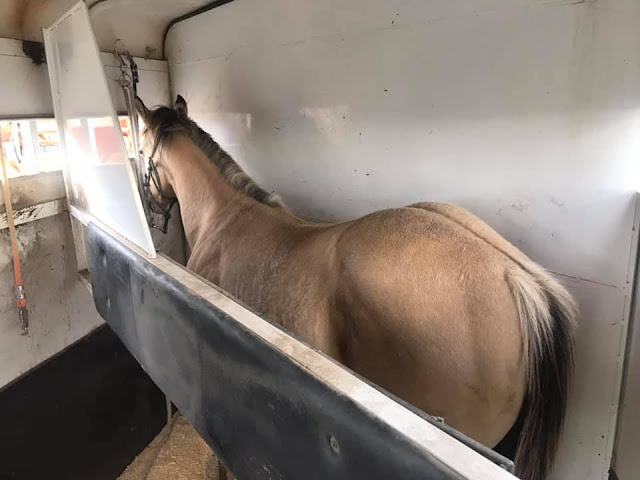 We kept it very, very calm, and we didn't pull out with him in the trailer--choosing instead to save that for the actual day--which, in fact, would be the very next day.

He did great.  He loaded himself in, and didn't care a bit when I closed the divider.  He didn't pull back, rear up--nada--nothing.  He pawed, just a little bit.

I made the decision to haul tied, putting him in the first divider, and take a buddy along (Cowboy.)

And here is a picture of him, calm as can be, in the trailer when we arrived at the vet's office. 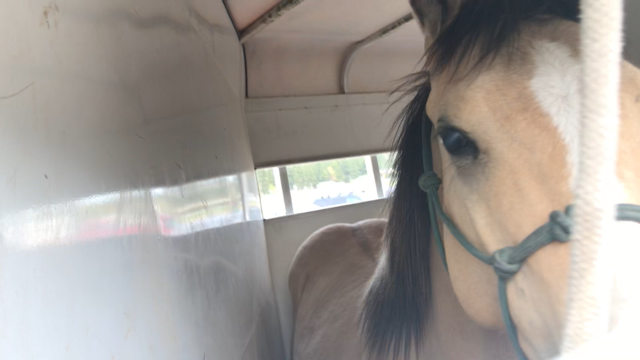 I unloaded him, walked him to the clinic, they sedated him.  Now, I should backtrack just a couple of hours to when he cowkicked me.  I saw a descended testicle, and I wanted to check for the other, but when I went to grab it, he gave me a warning kick--very light.  I kicked him back disciplined him, and he let me feel it like a gentleman.  It was definitely there.  So, I did tell the vet there was one down, one up, and when he felt back there after sedation, he said that was absolutely right, and the one up was right there, too.  Easy procedure.

I high-fived my husband.  Party was on!

The vet asked if I could get Tumbleweed to go through the surgery door OR if they needed to open up the bay door.  I looked over at it, a pretty wide door, and wondered if I heard him right.

Um, yes, he can go through that door.  (At this point, I was feeling like Tumbleweed is pretty much a super star if that question even had to be asked.)

They took him back to a surgery room (apparently, gelding procedures are a big deal nowadays. The four previous ones I had done were done at the farm, on the ground).  Twenty minutes later, they returned and told us it was about as perfect as they've ever seen.  They came right out--no fat--no extra cutting.  They expected his overall recuperation to be quick, due to the ease of removal.

WARNING!!  I'm going to show you the picture of his testes, because some people like to see this stuff--but if you don't want to see it, please stop here.  I will make the picture small.  If  you want to really see them, click on the picture to enlarge. 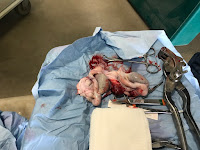 I was surprised at how big they were.  The veterinarian showed us the different parts.  He seemed fascinated, and honestly, we were, too. But I was glad to see them go. In more ways than one.

He is now home, resting in a 12 x 12 stall.  He has to be separated from the mares for another month just to make sure he can't impregnate.  He may exhibit stallion behavior for a while, too.  The change doesn't happen overnight.

I could swear he is acting much more subdued... but maybe it's because of the pain.  Time will tell.

All I know now is that I AM RELIEVED to have this done, and that it went so smoothly.  A huge milestone.  And the trailer hauling practice was just what we needed to start our adventures hauling to the trails and being ponied off Cowboy.

I have a gelding!!  (And just a couple weeks before he becomes an official yearling!)
Posted by Linda at 9:01 AM