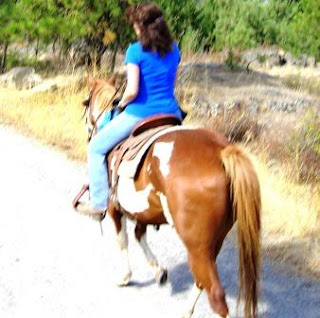 For the first time since last July 2011, I'm starting to have hope again that I may, in fact, still have my horse Cowboy as a trail riding partner.

The very knowledgeable and astute Kate, from A Year With Horses, first threw out the term Head Shaking Syndrome after reading a list of symptoms I'd posted.  I'd never heard of it.  At first I didn't even take it seriously.  All I could think was that an ill-behaved horse also throws its head around.  Was I dealing with misbehavior....or a real thing?

In fact, it was a real condition--and nothing to take lightly.  After seeing Cowboy thrashing at his own face one day, I was struck to the core about how serious an issue it really was and, I was soon to find, impossible to cure.

(A very disturbing video of Cowboy at his worst.)

This blog became a real depressing place to hang out as I alternated between false hope and despair.  I almost lost all interest in horses--something I see now as part of the process of letting go of Cowboy--depressing my emotions for him, but also depressing them for the others.  I had to let go, but not say good-bye and, in many ways, it was worse than him dying.

I'm glad I did (let go of him) because even now things are uncertain and it was time to move forward with my other horses--no matter the outcome.  And, I'm doing that--Cia is off to training tomorrow and I have a new plan of action with Beautiful's saddle-training which I'll talk about in an upcoming post.  Hint: It has to do with a Julie Goodnight technique.)

Two months ago I started a wonderful new treatment with Cowboy--TTouch--which I've talked about ad nauseum since then.  He had reached a point of frustration.  His broken-but-healed-front coffin bone-displaced-into-the-coffin-joint was showing minor signs of arthritis (last spring's x-ray) and he was often standing with that foot placed out in front of him.  Also, when his symptoms were at their worst and he was still being tied up, saddled and ridden (due to my ignorance falsely assuming it was largely behavioral), he worked himself up, for good reason, and became a more high-strung, reactive horse.

TTouch helped me bring him back down and work from his calm, non-reactive mind and it did wonders for his body.  Since we started I haven't seen him stand with his foot out once--not one time.  (Fingers crossed).  Today we had a horrible wind/rain/snow storm and all the horses were batty, but I haltered Cowboy with his TTouch nylon halter (light touch) and he walked out of the stall as docile as a kitten and let me do all  my crazy TTouch work--shoulder, face, mouth, ears, tail, legs--without a bleep.  He was Mr. Cool.

Yet, on the two sunny days we've had this spring, I saw him tossing his head again out in pasture.  It was that vertical jerking that we all now know as Head Shaking Syndrome.  For that reason, he is now stalled most of the day and on sunny days will wear his Guardian Mask with the big goggly eyes which block out 90 percent of the sun's rays.  Makes me think Cowboys and Aliens!  (picture coming soon.)  TTouch did not cure his HSS, but I do think it treated many of the symptoms--elevated fear, tight muscles, and overall pain.

By now you're probably wondering why I started this post so optimistically.  Well, the answer is because my veterinarian did some research and found that carbemazepine (anti-seizure meds) in conjunction with cyproheptidine (anti-histimine) have reduced symptoms in 88 percent of head shakers by 80-100 percent.  It's not a cure, but sure has shown some promise for helping them live better lives.  My husband says that the carbemazepine is also used in humans and can cause drowsiness, which may be why my veterinarian says it should be administered 6 hours before a ride.

This is going to be extremely time-consuming.  The meds have to be administered 3x per day during the spring, summer and fall, which is quite a time commitment and there is no guarantee how long it will work, if it works at all, since horses and humans can develop a tolerance.  Still, it's given me something to hope for.   Now it's just a matter of waiting for the meds to arrive and getting him on the program and wearing his space alien mask.

And though I have high hopes, I'm moving way ahead with my other horse's training.  It really is a new chapter...no matter what happens.

***My blog posts were few and far between after Cowboy showed his severe symptoms.  I was just reading over them and realized I hadn't even responded to many of your extremely kind comments back then.  Thank you so much for stopping by to cheer me up even if I was completely checked out mentally and emotionally.  Here and here.
Posted by Linda at 4:12 PM