A Friend and a Buddy Ride 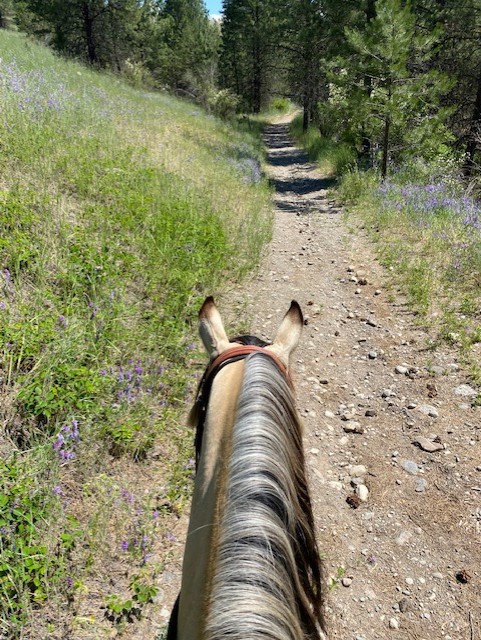 (Tumbleweed on the trail. This is a very little hill. We encountered a much steeper one.)

We had another beautiful day today, and that meant packing up Sweet T and heading to the park. We arrived at about 9:45 and saw a couple of trailers leaving. They had the right idea, beat the heat.

As I was grooming Mr T, a friend pulled in and she came over to say hi and volunteer her services should I need them.

I thought, well, this is a great time to do that ride we walked the other day, up to the bluff overlooking the river. I asked her if that would be okay, and she said sure.

Before the ride, I started T out with obstacles. I switched his mecate rein for a single rope rein that clips on, and I changed his regular rope halter out for a thin, riding halter that fits underneath a bridle. I planned to do the obstacles in-hand, then clip on the reins and do them in saddle. Tumbleweed did great. He had a day off, yesterday, and his feet were a bit sticky, at first, but it didn't take him long to be more willing. We rode through the car wash many times and worked on slowing him down and making him stop half way in it. We pulled the log with the rope over the saddle horn. And we did all the various other obstacles.

I tried to do arena work, but my back is still extremely sore from that damn hard saddle I had been using last week. It's going to take a while to heal. We did a little walk, trot, lope, sidepass, and open and closing gates. We also worked on neck reining and giving to outside leg, outside rein or inside leg, inside rein. (We did that on the trail, too.) I'm trying to get away from plough reining, and he's almost there.

We rode over to my friend and started down the trail together. Sweet T took the lead very naturally and happily. He moved out with his ears forward, but tuned into me. He was bright-eyed and confident. When we got to heart attack hill, he was a little hesitant because it's deep in trees and steep, but he took the lead again. He was huffing and puffing a bit (and I was so happy it was him and not me) and when we got to the top, he was on high alert as we came into the clearing at the top of the hill that overlooks the river. I was happy to have such a calm buddy behind him, and you could tell he took comfort from that.

At the top of the bluff, we switched off, and my friend took the lead. 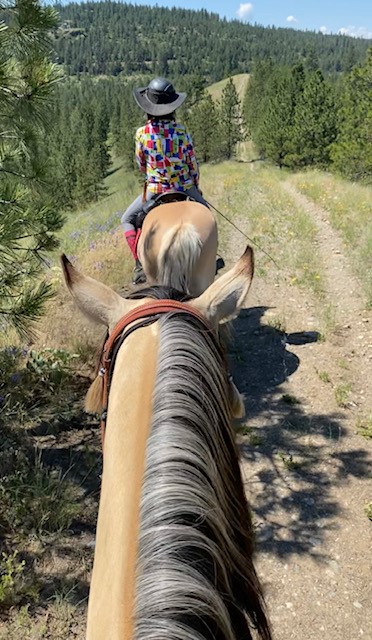 He didn't have any problem with that either.

He did so well, we extended the ride into another dense area that doesn't see a lot of riders. Because of that, it has more wildlife. All we saw today were birds, lots of birds in tall grasses, and one flew out in front of T, scaring him. He did a little jump in place, nothing big. He was tight. Nothing big. On the other hand, I have a friend whose horse overreacted really bad when a bird flew up under him and she got dumped and broke her ribs. That story is always rattling around in my head when I go through tall grasses. I'm glad T was exposed to that scenario, but it was in front of him, and not under him.

He calmed quickly, and we rode on, eventually coming to a steep hill with loose rock. My friend offered to take an alternate route down, but I thought he could handle it. Loose rock is quite scary for young horses because their back legs are slipping and they're trying to balance a rider. T looked for alternate routes down, but I kept him centered, and we made it. We will need to do lots and lots of hill practice.

At the end of the ride we went on a few more obstacles, and ended the day. Tumbleweed was super soft at the trailer. I ground tied him, and he stood as sweetly as you can imagine. That means the ride was a huge success!