I Only Want To Know About Yes

Right now, I'm not interested in "no." With Tweed, that is. I'm sure the bigger world has many no's left for me.  When it comes to Tweed, I've heard about his no's: no slicker, no water, no leaving the herd, no, no, no.

I know that every no is a signal, and it says, I'm not confident.

This week, I've only been interested in finding out about his yes.

What are you willing to say yes to, Tweed? What can I do to help you say yes? Let's start with the first question: Do you want to be with me today?

Two months away at horse boot camp, and Tweed was, and here's an understatement, disconnected.

He was tuned into the herd and the new dynamics since he's been gone. He was worried about his place in the herd. Very distracted. I kept him in a stall that communicated with most of the herd, and I rotated Cowgirl (the one he most needs to make peace with) next to his stall part of the day. (They're still working it out.) One thing I will not do is throw him out there to the wolves mares. Cowgirl is just too protective over Epona and her own, newly re-established, leader role. She sees him as a threat, and she's very aggressive. Working it out over the fence is much better than risking injury by throwing them in together. It's going to take a while, but I have all the time in the world. In the meantime, he's let out during the day with horses I can trust. Or, he's out and about with me.

Today has been one week since we brought him home.  We had three days of wicked storms and rain, but I tried to work with him a little every day in between systems. In the evenings, I would try to go out spend time with him in his stall. All we did here at home was very easy work over obstacles, some exercises I've learned along the way to help disengage and move out away from me (establishes his space and my space), facing and giving full attention, working on choosing to bend into me. Everything was done on the ground. (Remember the golden rule: If you don't have their attention, don't get on. My definition of "their attention" is their willingness, their togetherness, their yes.)

Monday we hauled him down to the state park with Foxy. When we arrived, there were horses and people everywhere. Turns out, they were having drill team practice. Hmmm, to leave or to stay?....  We stayed. What a perfect opportunity to have him around a lot of other horses!

At first he was distracted, but very soon we were working over obstacles and he wasn't concerned at all about the flags and riders and running horses.

Here we are finding his yes. 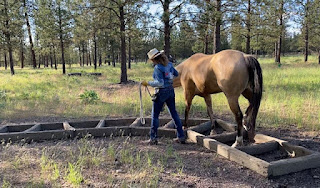 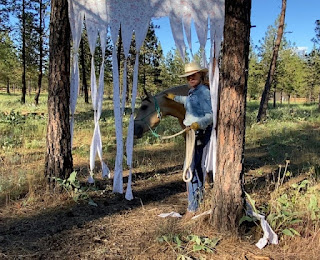 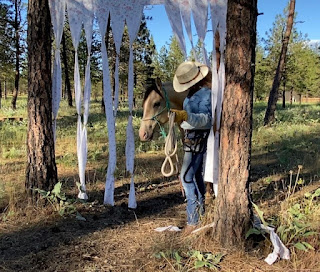 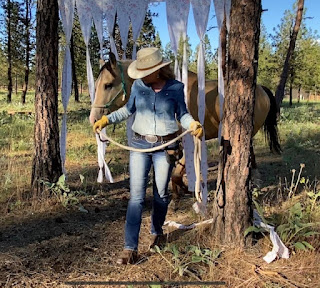 It was a pleasant, successful evening.

Tuesday I stayed home and worked with Tweed here. We did everything on the lunge line. He was very responsive and willing, but he had to be coaxed into the lope. I am concerned about his feet. The right front hoof looks off balance with the rest of the hooves. It's longer in the heel. I have a call into my farrier to come out and put new shoes on him and give me an assessment. I don't want him loping if he's not solid on his feet.

Fast forward to today. I drove down to the state park by myself. Just me and Tweed. He jumped right into the trailer, hauled quietly, backed out like a gentlemen, and was extremely chill and calm. Not a single herd-bound issue. No whinnying for backup. Nada. Nothing but happiness to be together.  This tells me Tweed is a one-on-one horse. He's a horse that needs his special person. Being one of many just doesn't do it for him.

I wanted to test him and see how much it would take to get his attention in the roundpen.

First, I did nothing, and I got nothing. 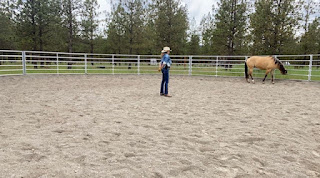 Next, I raised my left hand. Got nothing. 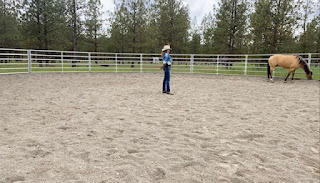 Third, I dragged in the flag, the main tool of his trainer. His ears tuned in. 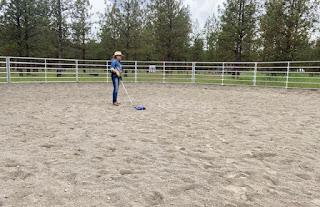 I barely picked up the flag, and he was moving around the pen. 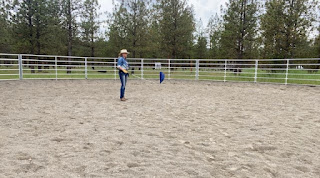 He went half a circle, and I set the flag down. He immediately came into me. 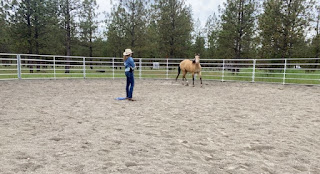 Here he is ready to work. Aha, I see he did learn something while he was away. 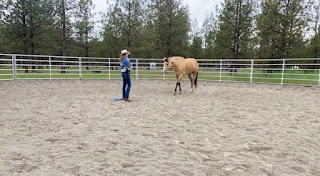 A little flag bodywork at liberty to see how long he would stay and if he was nervous. 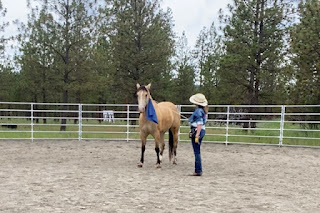 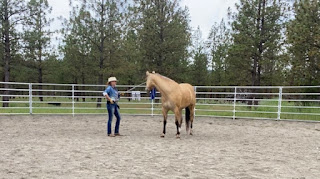 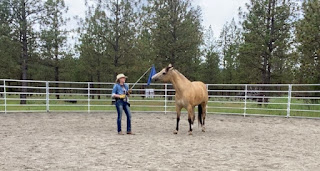 Nervous? Not so much. 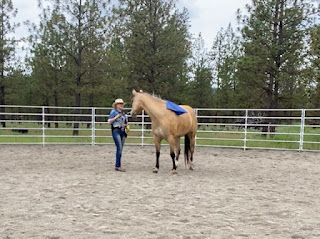 Now, he's following me to the gate where I stashed the tarp. 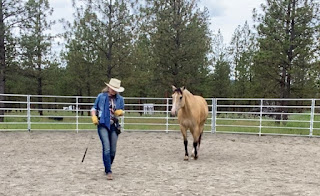 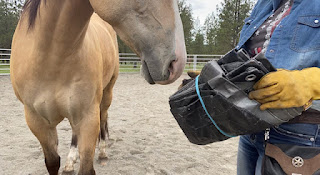 I figured the tarp would remind him of the slicker, but I wanted him to say it was okay to move each step of the way. I did the first introduction at liberty. 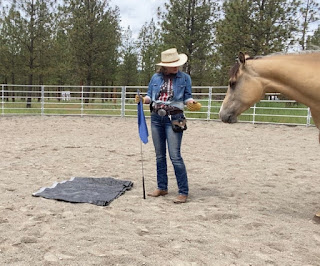 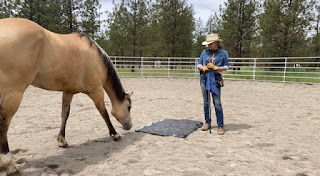 After a bit of that, I added the lead rope. 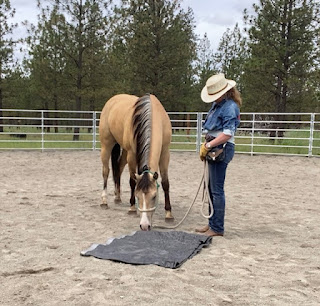 And that's where the photos end, because a friend of mine pulled up, and came over and chatted while I worked with Tweed. I thought it through and figured the addition would fit well with what I was trying to accomplish. We probably stood and talked for two hours while I worked on Tweed with that tarp all over his body, Masterson Method work, disengaging, and him standing half asleep with his head in my arms.
Yeah, it was kind of perfect.
If all goes well, tomorrow we ride!
Posted by Linda at 8:24 PM