It has been a cold spring--really cold--maybe the coldest on record. The late spring wildflowers, like camas, were wilting over in one area we hiked. They were like, "Um, what the hell is this? Someone told us it was May, quote unquote. Spring, quote, unquote. Obviously that was wrong."

The early spring wildflowers, however, are absolutely abundant! Triumphant! Loud, and PROUD! They're doing that "threading the needle" dance move, singing "We rock, we roll, we be the king of the world." 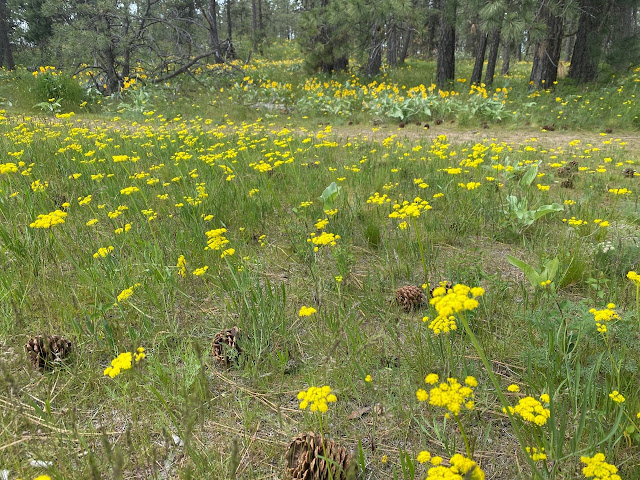 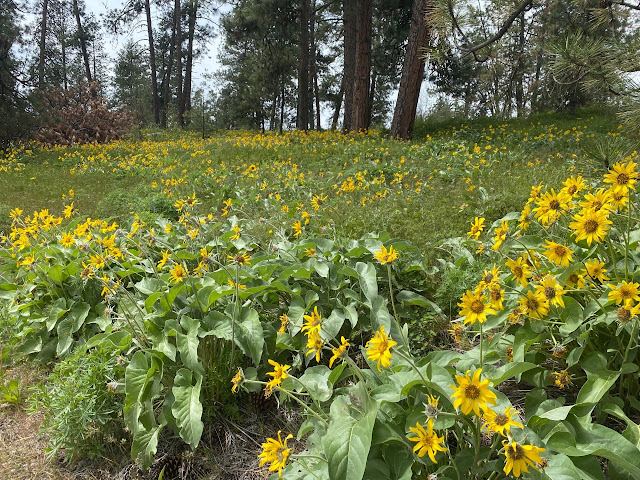 Even the giant dandelions are getting in on the stone cold action. 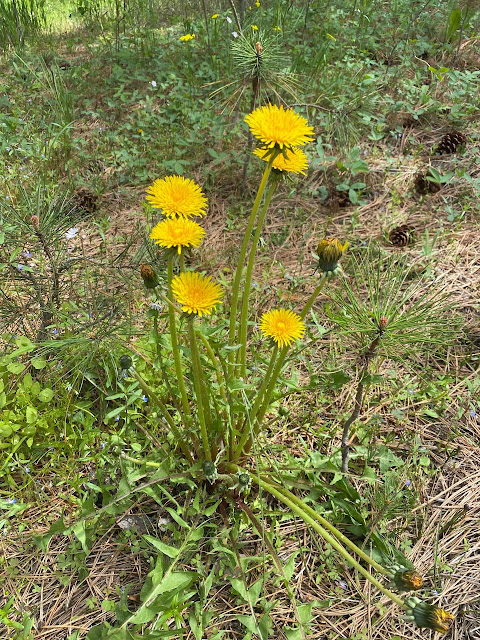 Here's a patch of Camas that must have found a bit of sun. 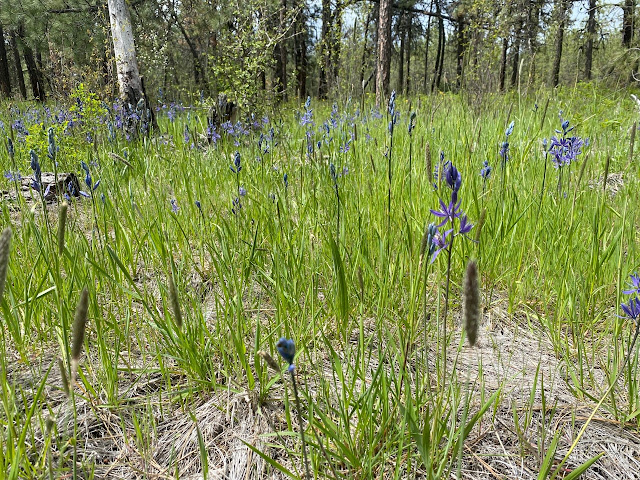 And the prairie star that just keeps growing and thriving. 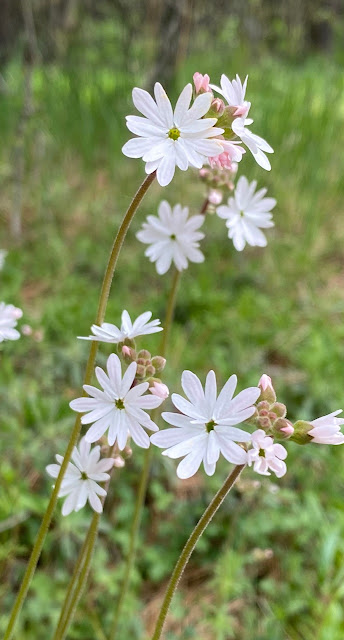 I had a scary day worrying about Tumbleweed yesterday. My trainer messaged me in the morning to let me know he seemed off and had been lying around. We put him on watch and he gradually got better. She noticed he had developed diarrhea. It was touch and go for a little bit, and I told her to call the vet if she thought he needed it, but by the end of the day he had rebounded, and today he is back to normal. That's the problem with having him in training two hours away--it's tough to watch over him.
He only has about ten days left, and I am getting really excited to bring him home. I haven't gone down to ride him while he has been away. With my dad's death, and spending as much time as I can hiking, attending plays, and having my mom come to stay for long periods, there hasn't been opportunity. And honestly, I just want to ride him on the day I pick him up, then take off on my own here. I want to start from square one with our relationship, and that's hard to do popping in every couple of weeks while he's in training. I'm taking advantage of the trainer's work, not my own. It feels like I'm hitching a ride on someone else's horse. Right now, he's tuned into her, as he should be.

My husband and I saw three plays last week--three! That's like a dream come true. I would attend a play or musical every night if I could, taking no second, minute, hour, or day for granted. I love live theater and live music, it feeds the soul. Truly. My husband loves it as much as I do, thank God! And my mom is loving it, too.
We took my mom to see Our Town last week while she was here with us. It was much better than I thought it would be, considering it's done in pantomime. The play was written by Thornton Wilder before WWII, and it touches a lot on death. (We didn't know what it was about before we attended. It's an old play, but we had all, somehow, never seen it.) There was even a funeral procession that marched right toward us and made me catch my breath and cry. It hit close to the bone.
My mom and I both felt like we were meant to be there, to hear that message--

So, we saw Our Town on Saturday, then Hamilton on Tuesday (WOW!! It was great!), and The Lifespan of a Fact on Thursday.
The set of Hamilton in Spokane. 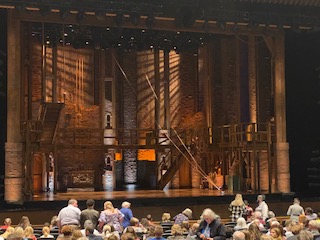 Lifespan of a Fact. 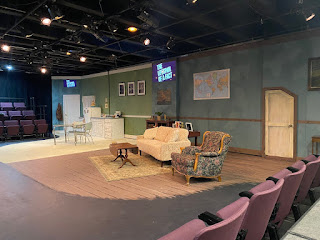 Last night, we went with my brother and his wife to our local winery where they had live music and dancing. It was packed. 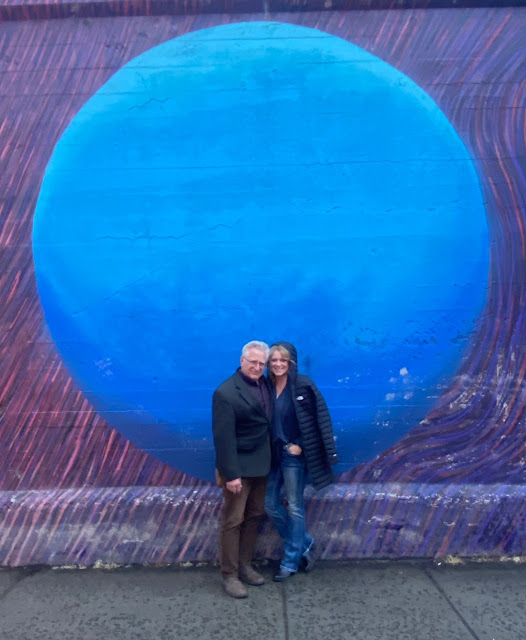 As the world is somewhat falling apart, and we're scrambling to find baby formula for our babies (and grandbabies), there is something going on (at least in our community) where everyone is desperate to get back to normal. Every play has been sold out, or very well attended. Last night's music, wine, and dancing, the same. We're trying to figure out how to be a community again. And, we need each other.
I will leave you with one last photo. It is of prairie smoke from one of our hikes. 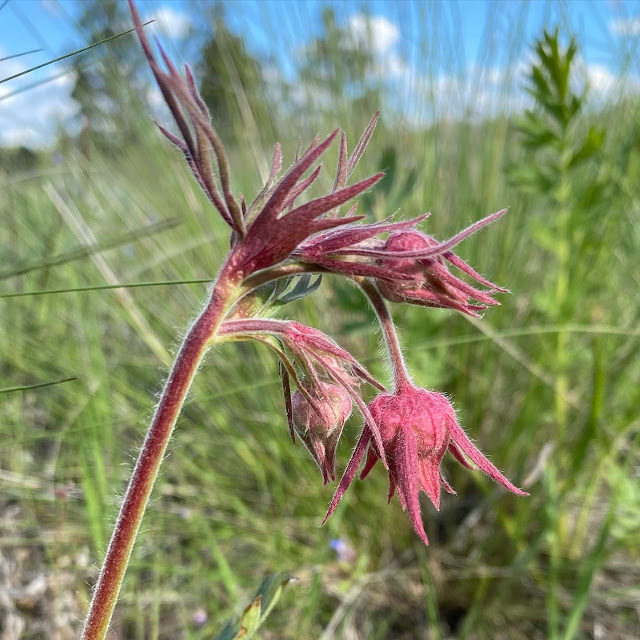 The blossoms of prairie smoke are tight, and they droop down. They are waiting for a bee to push itself into them and, when one does, the blossoms will then, and only then, lift themselves up toward the sky and go to seed.
I feel very much like the prairie smoke this year.
Posted by Linda at 2:27 PM