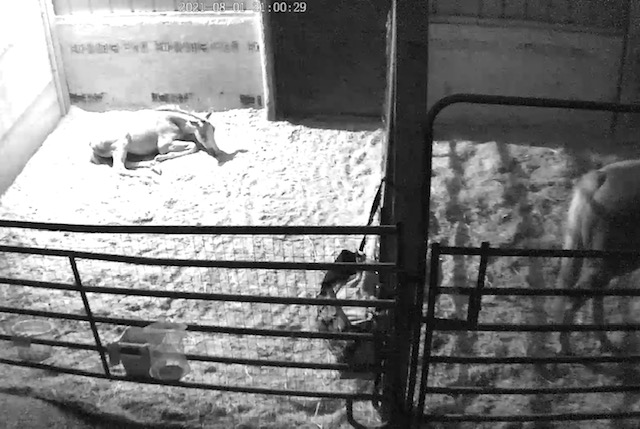 Epona has been home almost a week now, and she's almost 10 weeks old. It has been a series of ups and downs, and lots of U-Turns, but the final result of all the buddy auditions was to reunite her with mama, and mama was desperate for the job!

This was definitely not a full reunion, but either complete separation with panel and wire, or very closely supervised interaction through the fence. Those moments are short and rare because I don't want her to try and nurse through the opening.

Sometimes, mama gets cranky. Who knows why? That's the part of speaking horse I don't get. The cranky parts.

Up until yesterday, I was diligently weighing every bit of replacer pellets she ate, but that became so frustrating that I abandoned it and switched to a whatever-she-eats-has-to-be-okay mentality. You can't make a horse eat. I did everything possible to find tricks--adding this, adding that, taking away this and that, feeding from hands, feeding on lap, ...you name it, I tried it. But her hunger for pelleted food is very unpredictable. She loves her Omolene 300, and will scarf that up, but add replacer pellets, and she turns up her nose. She loves grass.  She loves alfalfa. So, I even tried to lay her mix on the grass and alfalfa, so that she would have to eat the pellets.

This morning, the grass was gone, but the pellets were still there.

Her appetite has remained the same, no matter who is in the stall next to her, but being near her mom seemed to give her the most comfort. And, for a little one fighting pneumonia, whatever comfort I can provide her, I will. It's a balancing act. The difference between Epona and an orphan foal is that she is not an orphan, and I can't make her mom disappear.

I know babies need replacer pellets, but I'm not sure at what point they can handle hay and supplements. I've read testimonies from people who had similar situations, orphan foals at this age, and similar eating patterns, and it turned out okay. We give her oral supplements, too. I'm hoping that altogether, it is enough, and gets her through.

She developed diarrhea a few days ago, but it wasn't that bad, and disappeared as fast as it came with a little Pepto. She was definitely transitioning, because her manure changed from baby looking droppings, to big horse style droppings. The color changed, too. It now looks like a hay based manure. Same color and consistency. She loves her grass and alfalfa, and scarfs it down.

I haven't given up on the replacer pellets, but I'm concentrating my efforts now to keeping her happy and low stress. I go out every hour or so and place them in my lap, hoping I'll catch her at a hungry moment.
Sometimes I get lucky, and sometimes I don't.
I think part of her low appetite pellets could be a result of stomach upset. I'm going to ask the vet about giving her Ulcer Guard. Apparently, orphan foals are very susceptible to ulcers, which is another reason I'm trying to minimize her stress.
I'm having a hard time getting someone to deliver the hay I reserved. Our regular guy is 3 weeks out, and my supplier doesn't seem willing to let us pay and hold it. Grrrr....so frustrating!! I've called many other people, and they don't even bother calling back. I'm going to start buying some of it from our local feed store, and just pay a premium price until I can catch a break.
So, that's the latest goings on around here. It's hot and smoky, but that seems to be our new summer normal, as sad as it is to think that. I'm looking forward to Autumn. I don't like to wish away time, but it would be nice to get a reprieve.
Posted by Linda at 3:42 PM