Time To Do or Die 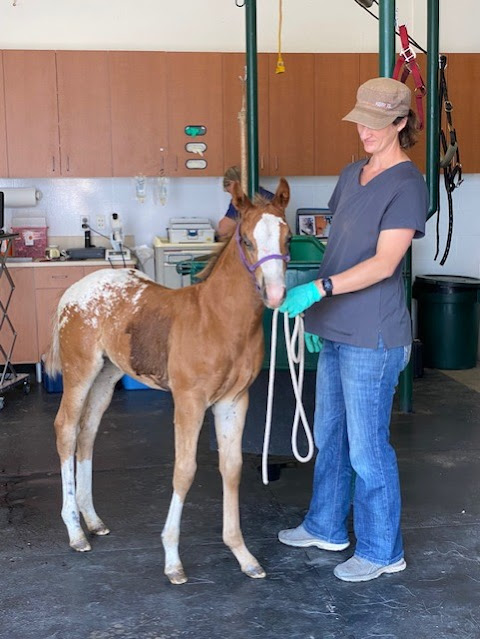 Our good options ran out, and only two options remained: 1. Leave Epona on Cowgirl, and watch her get worse, and possibly, most likely, die, or 2. Hospitalize her, teach her to eat independently, support her, and see if she can make the transition. There really was not a 3rd option after today.
Epona was still strong, but we were starting to see her sleep more yesterday, and more milk come out of her nose, rather than less.  It seemed to us, that when she was weak, her nursing became very inefficient.
Also, she had one swollen eye yesterday.  It was better today, but we had them look at it at the appointment, and it was a slightly torn cornea, they think from dirt. They told us that babies don't have developed nerve endings on the cornea, so they lack sensation, and they often have them wide open when they shouldn't. It could have been lying in the dirt, or hay, that caused it, but they don't really know. 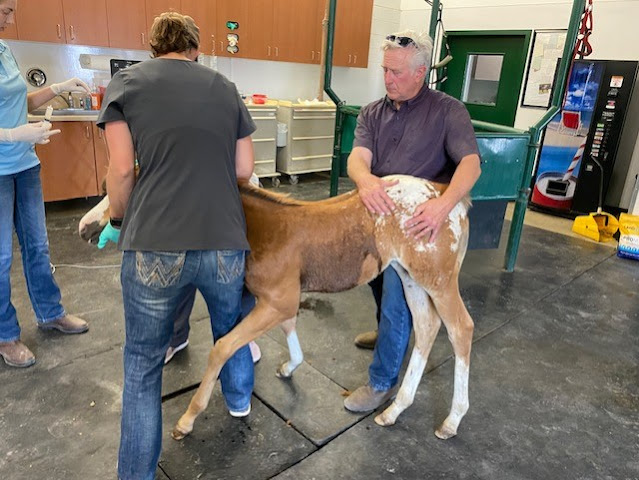 Her lungs were about the same, but mildly worse. Nothing too bad yet. However, her white blood count had increased, suggesting that she is fighting something that is antibiotic resistant. They had to culture the fluids in her lungs and send it in for results in order to know which antibiotic to try next. That was a complicated procedure, which required sedation. 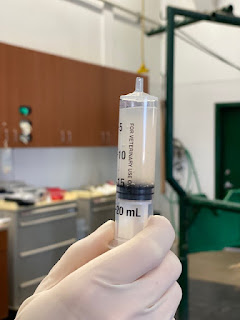 (fluid from her lungs mixed with saline they had inserted)
All that said, we cannot allow anymore aspiration pneumonia. As she aspirates, she brings foreign bacteria into the lung space--from the air, dirt--anything she touches. Being weak with pneumonia causes her to drink less effectively and aspirate more. The vet said she nurses really well for about 3/4 of the time, but at the end, it's as if she gets tired and starts to aspirate.
We were prepared for the bad news and had packed all her transition items: replacer, selenium, and pellets. They think they will keep her for approximately one week, at least until they get the results back about the culture of the lungs, and know which antibiotic to place her on. If she deteriorates, they will make their best guess about an antibiotic.  If she doesn't eat, they will tube feed her. If she doesn't drink, they will give her an IV.
It is out of our hands now, and all we can do is pray for the best.
Cowgirl didn't take it well, but that was to be expected. She keeps returning to one little pile of Epona poo, and smelling it, then whinnying. She acts like Epona is lost somewhere.
But she still takes time to eat.
If Epona makes it through this, she will not be placed back with Cowgirl. We had begun creep feeding her, and she was showing real progress this morning, eating more aggressively, and not caring that mama had left and was on the other side of the stall and turnout.  The two weeks Shiloh gave her did give her time to mature, and that's a good thing.
She is two months old now and, for all practical purposes, an orphan foal. But Cowboy was orphaned at one month, and many other foals are orphaned--so it is up to Epona to choose to fight and survive, and she has the help, and the good care, to support her fight.
Posted by Linda at 4:10 PM