Epona's First Day At the Hospital

You all know me pretty well by now, so guess how much I slept last night, Epona's first night at the hospital?

It was a tough night for all of us. God, we love that little horse!

Hard to believe, but she turned 8 weeks today. It seems like she has been with us for years.

Okay, enough sleep deprived rambling. Let's get down to business.

We went to see her as soon as visiting hours opened, but after we'd made a call, as soon as they opened, to check on her. They told us they'd initiated an IV that night, and she had "perked up" this morning. That was NOT a lot of information, so you can understand our need to get there at the earliest possible moment. 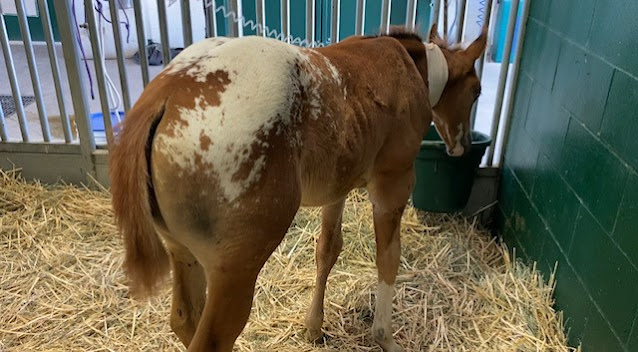 As sad as Epona looks here, there were horses there that looked MUCH worse. It was a reminder that many people go through heartbreak with their horses. There was a beautiful fresian with a foal with a deformed front limb. There was a beautiful dunskin, that looked just like Tweed, laid out on a large table/mattress for MRI, that looked dead, but I don't know what state he was in. Seeing all of that, and more, I was rather relieved at Epona's condition. 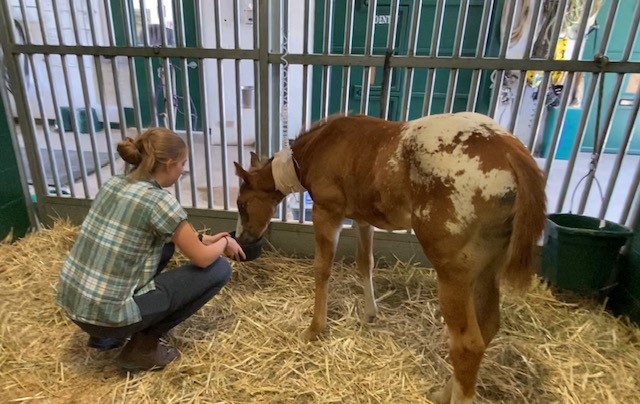 Just like with us, she has refused any milk replacer. She also refused to drink water, and that is why they had to initiate an IV. She has eaten hay, about a flake, and started drinking a little water before we arrived. Her eye looks normal now.
She was very, very tired from worrying all night, but happy to see us. We petted and loved on her, and tried to get her to eat milk pellets mixed with Mare and Foal. She wasn't interested. But then a palomino mare came in for examination, and when Epona saw her, she definitely thought it was her mama.
Of course, it was not, but a sweet, sweet, beautiful mare, all the same. She reminded me of Rosalee. 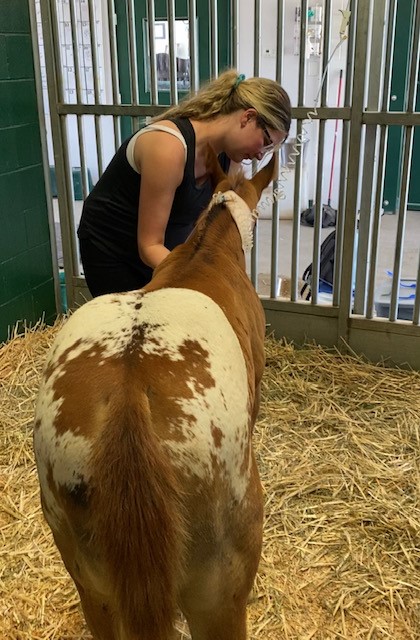 All the other horses seemed tuned into her, and she to them, and she seemed to take comfort in their presence. The techs  and interns, who live there (there are two, and they were the ones who started the IV last night at 12, with a little sedation) were very attentive to her needs.  She loved their scratches and hugs.

There is no way we could have provided the support they're giving her. We had to deal with all these things in 100 degree weather, and we knew that dehydration and starvation--coupled with stress--were killers. Hospitalization is the only way to go, in this situation.

I felt good about her energy level and health, but a little discouraged at her stubbornness eating. The vet is going to introduce alfalfa, which she also had here, and they will work to tweak a feeding regimen that works before the release her.

As you might have guessed, it's expensive. And, add to that, my daughter is expecting her first baby in 2 1/2 months. That is an added stress for them, even though we have helped them with a little bit of the burden.

As we were driving to the vet today, she made us an offer of co-owning Epona.

To be honest, it is something I had already considered, but did not want to broach to her.

My husband and I are very attached to Epona, equally as much as our daughter and her husband. She is here with us everyday, and a big, big part of our lives.

There's a part of me that wants to do this, but another part that wants Epona to remain hers, and just help them with this. The issue, in my mind, is that there may be more costs along this road, costs that are insurmountable for them. And, she will be busy with the new baby, and I will have more time to train Epona.

I think we will evaluate this decision as the week unfolds.