Training Epona and Reflecting On Tumbleweed 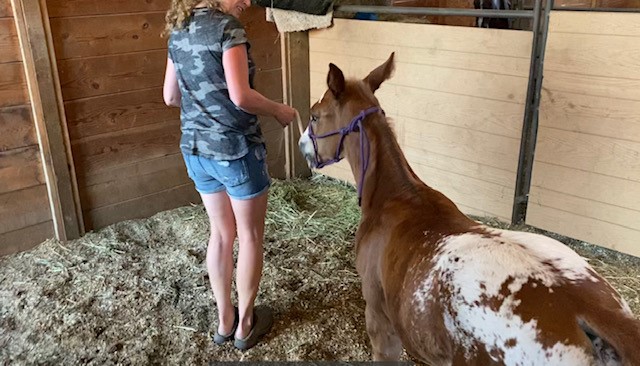 As we adapt to the extreme heat in our area, we are also working with Epona on leading. She has had so much daily handling for meds, that she is quite comfortable now being held, having her legs rubbed, her feet picked up, and standing for halter. However, she wasn't willing to lead away from Cowgirl, and the stall, until last night.

You'll have to excuse my daughter's heavy breathing during the video. She's very pregnant, and I'm not sure what was going on there. haha.
The farrier was out a couple of days ago, and he suggested we work with picking up her feet everyday, which we have done, and holding them and rubbing the hooves. He intends to trim her the next time he comes out, and he wants her to be comfortable with nippers / rasp.
She has been a joy to work with training. We joke that having such a mean mama, which Cowgirl is, makes her appreciate us more. I love Cowgirl to death, but she is not mama material. She's one of the grumpiest, bossiest, most stern horses I've ever known, yet Epona loves her.  Or, more accurately, Epona respects her and needs her milk.  We all agree that Epona will probably be very happy when she's finally weaned and rely solely on a human mama, and / or Foxy, to replace Cowgirl.
Feeding a lactating mare can be tricky, and we are trying to gauge her needs day to day. The vet said she doesn't want to see her any fatter, and to start bringing the food down as Epona starts to eat solids. We've introduced feed to Epona, and she likes it, but is not able to eat much yet. We still haven't witnessed her drinking water either. I read that some foals won't drink water until they are weaned. Yikes! I would feel so much better if she would do it now. But that saying, you can lead a horse to water, but you can't make them drink, is so true of our situation.
Raising Epona makes me think a lot about Tumbleweed, when he was a baby with Rosalee. (Photos by Shirley, at Ride a Good Horse. He was her baby from Beamer.) I would go to see him as much as I possibly could, but I didn't get the day to day that Shirley did.  When I see Epona do something, I think, that's probably what Tumbleweed would have been doing. 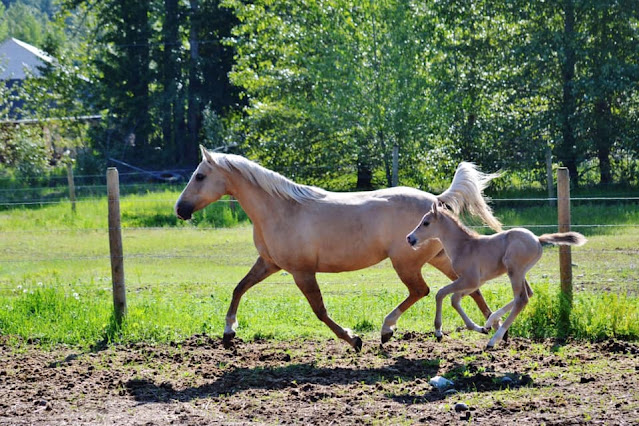 Rosalee was such a GOOD mama...unlike another mare I know. 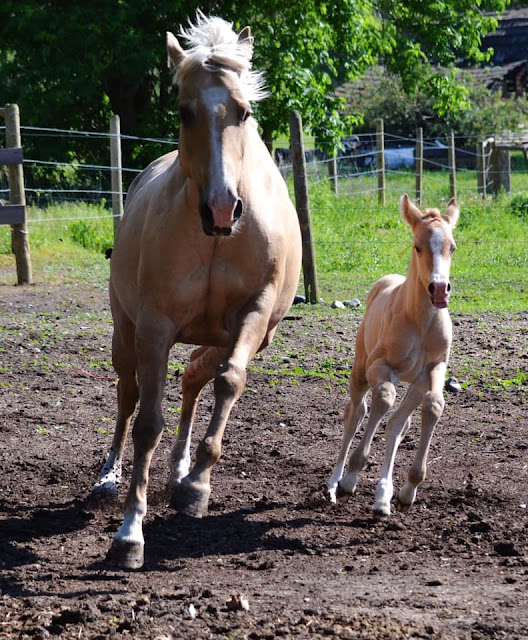 He was such a beautiful foal. I bring him in several times per day now to give him his feed and pet and groom him.  Unfortunately, we're not doing much more than that these days. I'm hoping we will get cooler temps after this heat wave that will allow me to start hauling him to our local equestrian park.
I don't have a good recent photo of him, but he's starting to fill out a lot. I think his height is finished now, and he's perfect for me--about Cowboy's height. It's easier for me to get up and down and swing a saddle on.
He's also extremely gregarious--just loves people. That's how I hoped he'd be. He's a horse who never had a bad experience, so why wouldn't he? People mean food and love and security and fun.
One day, he and Epona will get to be turned out together--the youngest members of our herd. And maybe someday, even ride the trails together! It's so exciting to imagine that!
It's hot, but life is pretty sweet here with these horses!
Posted by Linda at 8:53 AM