We broke the all time heat record yesterday.  All. Time. Yay! And yes, I do feel a sense of accomplishment, and victory, in surviving it. (Don't laugh Nevadans and Arizonans!)

The misters worked incredibly well. It is the closest thing to having AC in the barn. Both Cowgirl and Epona made good use of them. They will today, too. Even though they're predicting a mere 106 degrees. pfft.

Here's a video from our barn camera, where you can see Cowgirl moving into the mist. Epona learned to do it, too, because she copies everything mama does. It makes it a good training opportunity for Epona to accept water.

Here's Epona sleeping in the cool mist.
It worked so well that my husband installed them in the loafing shed.
We were lucky to find the supplies, because they sold out of misters everywhere. My husband purchased the last package of misting heads.
So, that was a success.  But we had other heat / barn drama--a family of birds who were overwhelmed by the heat, and their baby birds fell out the nest, unable to fly. They became severely weak and dehydrated.
Shiloh and I brought one back to the house and got it to drink water through a dropper. 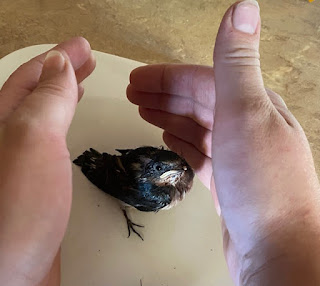 We searched the internet for what to do next, and found an article that said we should either put it back in the nest or create a new nest near it. Off we went to the barn, and found its siblings, also stressed and hiding on the ground. 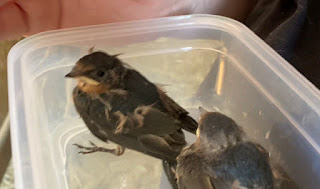 We were able to get water into all of them. They opened their beaks and drank from the syringe. But when we got a ladder, and placed them back in their nest, they immediately fell out again. It was just too hot in the nest.
Mama and daddy were watching all of this, and trying to teach their birds to fly. 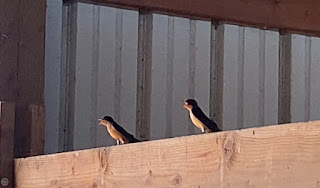 Our solution was to make a nest in an old grain bucket and place it high enough that the cats couldn't reach it, and near the original nest. 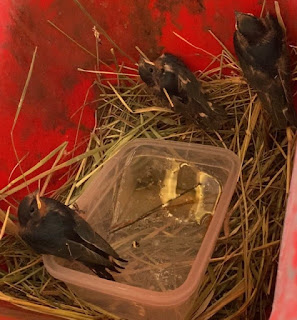 And we placed some water in the nest.
It worked great. All three birds seemed to gather their strength, and when the temps dropped, at about 10 pm, my husband I tried putting them back in their real nest again. Two hunkered down, but one flew out, and I couldn't find it.
I went out to close gates and fill water troughs, then returned to see if I could find the baby bird. Unfortunately, my barn cat had already found it.
That was sad, and I didn't have much hope for the other two, but this morning I went out, and there they were, perched on the edge of their nest, looking strong and happy.  Mama and daddy were nearby trying to get them to fly.
I hope they make it. It's a reminder, though, of how this heat affects so many other animals--and the ecosystem as a whole.
Posted by Linda at 9:53 AM