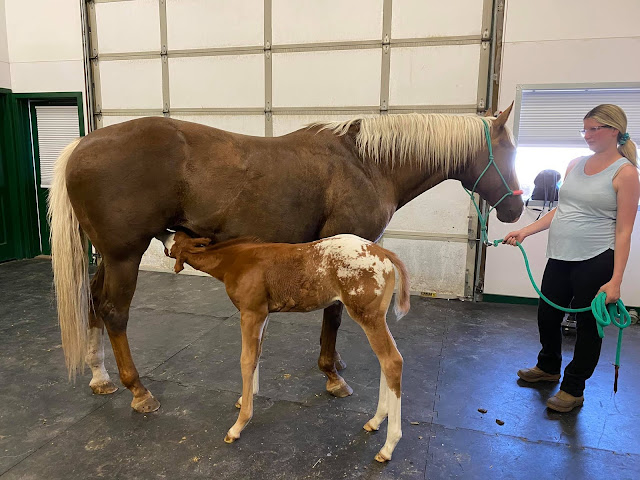 I may not have raised foals from birth before, but I do know what they should look like, and how they should progress, if for no other reason, just watching Shirley's blog at Ride a Good Horse. So, when people were asking me how Epona was doing, and if she was 100% yet, I said no. I guessed that she was 50% better. She had been 80% efficient at nursing the last time she was at the vet, and I figured she was 90% (or just a little better) now.

Therefore, when the results of her ultrasound revealed a 50% improvement, my realism (and x-ray vision) was vindicated.

It was a HOT ride to the vet clinic yesterday, but not nearly as hot as it's going to be when we go back next week. Cowgirl was sweating because we had to wait 20 minutes for our appointment. She got very nervous in the trailer, and did a lot of prancing around with Epona. It was nerve-wracking for me to make her wait like that. I was almost ready to drive off.

But just when I'd lost all hope of ever being summoned, the vet came out to get us.

Epona has learned to enjoy the vet clinic. She's very curious, and they let her wander around the room.

When we gave them our update: congested nose sounds, a drip of milk here and there from the nostril, but not nearly as often, or as much...our vet immediately jumped to the possibility of taping Cowgirl's nipples and starting Epona on pelleted milk replacer. However, after seeing Epona's lungs with the ultrasound, she backtracked.  She was happy with Epona's weight gain (176 lbs), and the improvement in her lungs, and she decided to keep her on mama, but introduce another antibiotic to her regimen. (and also increase her old antibiotic, to reflect her gain in weight).

I asked her how long we can go on like this before there's lung scarring, and she said we have a long, long way to go.

She wants us to start introducing Omolene 300 (Cowgirl's supplement) as a mash, once per day. She also wants us to add a low water trough for Epona so that we can see if she starts to drink water by herself. (Currently, she has access to a low automatic water) And then we're going to take it on a week to week basis, assuming she doesn't go backwards. Her next appointment is next Thursday.

We left the clinic feeling pretty confident about the future. Epona has done very well, and as she gets older, and more mature, our options expand.

As for Cowgirl's weight, she told me she doesn't want her any heavier, and as Epona starts to eat other foods, slowly back off on her Omolene 300 supplement.  Right now, she's getting about 10 pounds per day, and 24/7 grass. We had been told to give her Bute (by Cowgirl's vet in the same clinic) for her nursing issues, but Epona's vet wasn't keen on the Bute. She said some of it is getting to Epona, and she'd rather it not. I told her I'd compromise and only give as needed. (Which I'd already been doing.)

We are going to have record hot temperatures this week--exceeding 100 degrees--and I am very happy Epona will be more mature by the time they do hit. I'm going to have to find creative ways to cool them off. We have a sprinkler in the pasture, and I may turn that on for them--a cool ground does seem to take the bite off of the extreme temps.

What things do you all do to help the horses survive during extreme hot spells?