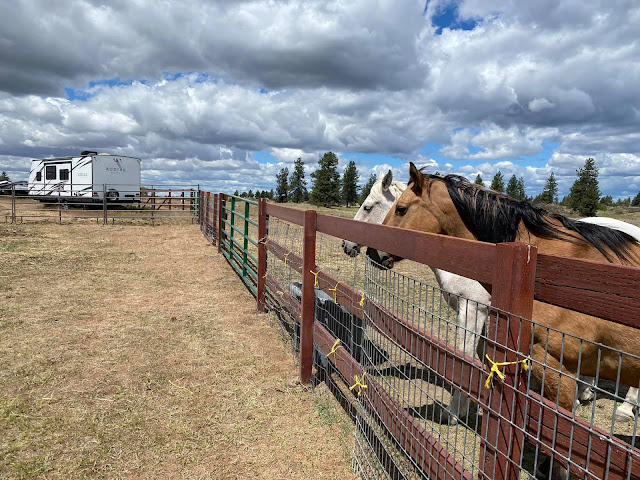 (The mares know something is happening, especially Foxy Mama. We put up temporary panels so the baby doesn't slip under the fence. Like the twine job?)

(From yesterday) We are still waiting for the foal, but many changes have occurred which make us think it will be soon.

1. Remember the “teat training” we were doing? Well, yesterday, Cowgirl did a complete about-face. Only the day before it was almost impossible to wrap her tail or touch around that area without her threatening to kick, and then out of the blue, she became a complete sugar pie who wants to be scratched around the teats. She gets that goofy look like when you find their perfect itchy spot. That is Mother Nature stepping in to get her ready, and eager, for the foal nursing.

2. She is dripping more milk.

3. She’s becoming very soft around the tail as her body prepares for delivery.

We added a grassy area to her turnout, and hope she will deliver there. The whole space is quite large and will give the foal plenty of room to run. It also shares a gate to the North pasture, where they will rotate in and out.

I’m ready to have this behind us. The hourly checks are taxing, and I’m sleep deprived. I’m also worried for her safety, and the safety of the foal. I keep hearing sad stories, and I don’t want to be one.

We’ve done all we can do, with regular vet checks and shots, so now it is what it is. I just hope and pray it’s a healthy delivery.

Update: today I went out and found her leaking milk in streams, and it was somewhat clear. Went out later and it had stopped, and teats were waxy.

I had another lesson with Tumbleweed, and we did similar work as in the last session, but at the trot. Basically, keep the head straight, ask for trot, open the rein for the turn, push with opposite leg while lifting opposite rein to chest. All of this is done with the hands high, just above his head, and in quick succession. It accomplishes the same thing as the 4-point turn, but in saddle.

We worked on it at home, and was a bit more difficult with his buddies in the pasture, but we succeeded.

It’s still very awkward. He prefers the obstacle work to the trot work. Give him a bridge, and he’s a happy camper. Trotting circles...not so much.

While I was lunging him at the training barn, I dropped my line when he was at the lope. I had visions of him running free like a wild child, but no, he stopped and waited for me to pick it up.

I hope my next post will be an update on a newborn foal—a healthy delivery, a happy addition to our herd. ❤️🙏