Before I left with Tumbleweed, Sarah gave me some words of advice:

1. Always remember he's young, and be ready for anything.

2. Always be able to get his head around and unlock his hips, just in case he does try to bolt or run. Constantly work on that, so it's there when you need it.

3. Never push him too far, but build on his successes.

4. Don't get into fights with him, as it will only escalate, but be firm and consistent in what you are asking and always enforce the boundaries.

5. Do something with him every day, even if it's just tying him up while I work around the barn.

But most important of all, and the most simple--

6. NEVER get on him unless I have his full attention.

I thought back to my work with Beautiful, and how well it was going, until the day of her blow up, and I remember very well it was windy, she'd had a week off, was amped and nervous away from the herd, and I did NOT have her attention.  For some reason, I made a conscious decision to work through it in saddle, probably because I'd just returned from auditing a Buck clinic, and I wanted to work on what I'd seen there before I forgot. I got into a fight with her that escalated, and I paid the price. 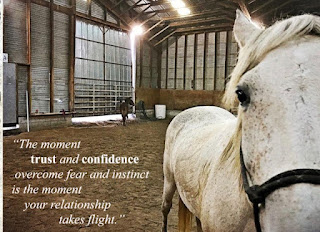 Another way you could put this is, are they in the trust side of their brain with you, or are they relying on fear and instinct? If the answer is fear and instinct, you are taking a major risk if you mount up.

When I think back, I remember all the clinics I've attended, and how, at the end of the day, I'm floating on cloud 9 with my horse. I think it's because we took so much time with them, and made sure we were tuned into each other, every step of the way. You get home with your horse, you have a million things to do, and only an hour to ride--you skip steps.

Yesterday was Tumbleweed's first day home, and he was nervous, agitated, and tuned into the herd. He had a hard time standing still for the farrier, and he whinnied all day for his buddies, who were out grazing. He was in the fear and instinct part of his brain. Since I haven't been working with him much these last two months, we are essentially starting over as a team. So, why would he trust me?

I had hoped to ride him at home the first day, but I remembered Sarah's words of caution, and decided just to saddle him, work him over obstacles, and do basic groundwork--then evaluate. I was able to get some of his attention, but not enough, so I ended it with that, and put him back in his stall.

A little bit later, I decided to close the pasture gates and let him into the turnout with Leah for some exercise and slow introduction. He let loose!  There was running, bucking, whinnying, running, super fast running, crazy fast running, more whinnying--and basically, a little bit of tornado mixed into it all.

Leah looked like, WHAT THE HELL?!?  Put me back in my stall! I opened her gate, and she ran right in.  Then I opened Tumbleweed's gate, and he ran right back in. So yeah, I made the right call about not riding him.

I've made a decision not to let him out with the herd this week because I want to work with him everyday, and I need to build a foundation before our next lesson. I told Sarah that plan before I left, and she thought it was a good idea to build my connection with him before I release him. Also, I don't want him sustaining any injuries.

One thing I don't intend to do is NOT ride him. If it takes me hours and hours and hours and days and days to get his attention and trust, I will do it. I WILL get my boy's full attention. And I imagine, once he settles in again, it will come fast. I saw what he should be like when he was with Sarah, and I have that in my mind as the standard:

That's what I'm going for.