Remodeling On a Budget, An Art Treasure, And Updates

We have not been sitting idly this spring.  In fact, we have been busy revamping our entire home--within a small budget. We asked ourselves what inexpensive, simple, quick things we could do to really breathe new life into it. We've lived here fifteen years, and everything, especially after 2020, started to seem dark and shadowy.
So we painted.
Nothing breathes new life into a home like a drastic paint change and a few new lights. 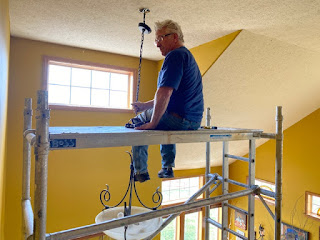 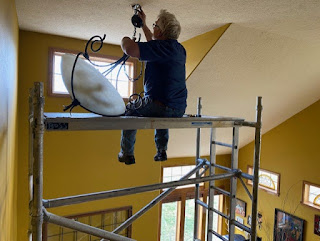 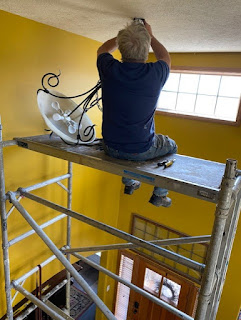 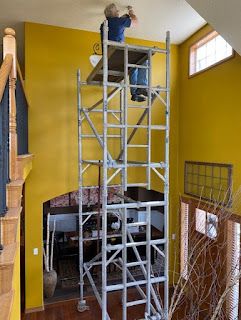 When you have 18' ceilings, it's not for the feint of heart.  As you can see, my husband is not a feint hearted man.
He concentrated on the high spots, and I painted everything below. Basically, what I could reach with a roller on an extension. 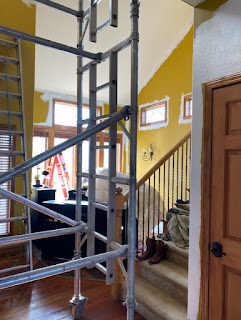 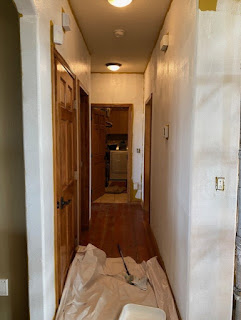 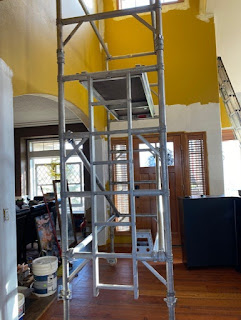 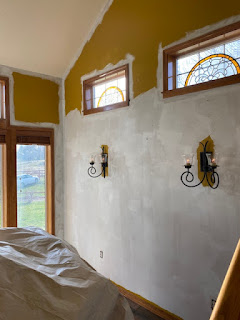 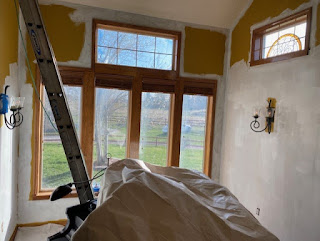 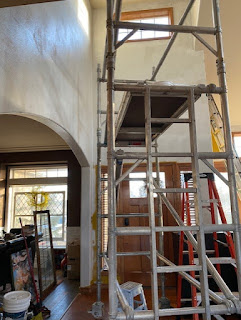 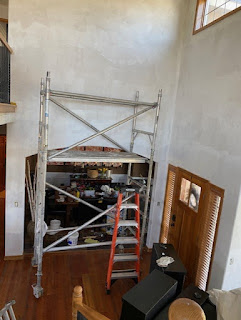 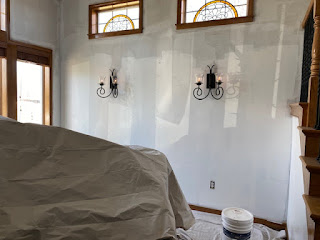 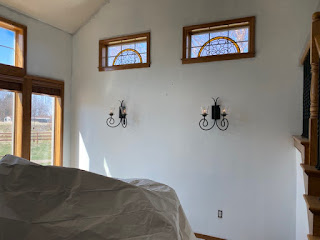 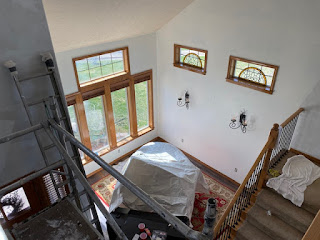 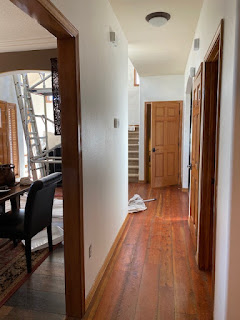 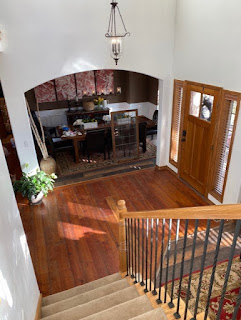 The contiguous area is very large. It extends from entry, to piano room, staircase, and upstairs hallway.
Going from mustard to white was about the most drastic change I could have chosen, but I was desperately craving a blank slate. A sanctuary of sunshine. New hope for the future. 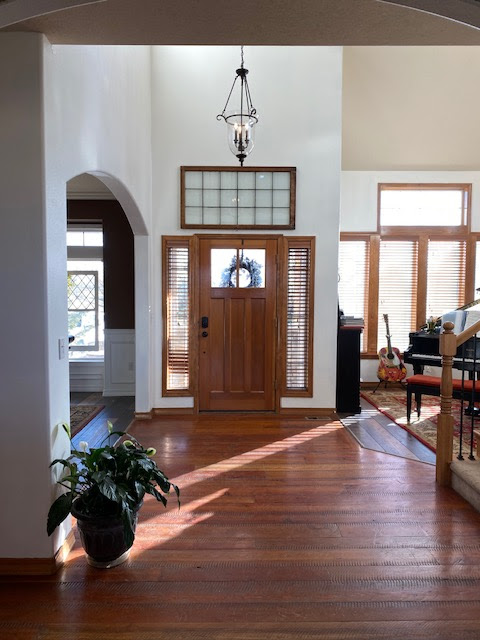 It was 100% the right choice, and we LOVE it.  It feels like an old Spanish mission to me, like the ones we visited in San Diego with my grandparents. It's so bright! Light reflects everywhere, and it even casts beautiful color onto the walls through the many stained glasses I've collected over my lifetime.
Since we did all the labor ourselves, it freed up resources to invest in decorative items to complete the space, and further bring in the Spanish missionesque vibe I was getting.
My daughter and I set out one day to go to every antique store in Spokane in search of a hand-carved wood table for the landing, which is now very bare with the white. And, some spanish-style accessories.  My budget was a mere $500 for all.
Well, the table was elusive.  It could be no deeper than 15".  It had to be wider than the 48" window it would sit underneath.  It had to be a complimentary color to the existing wood. And it needed to be hand-carved.  That's a bit much to expect at an antique store, and we didn't find anything even close.
But we did find these treasures!!
A hand-sculpted horse made in Mexico. We found this beauty for only $125. 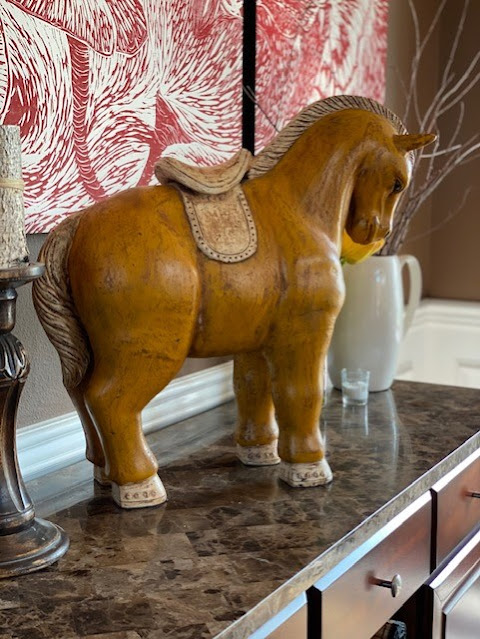 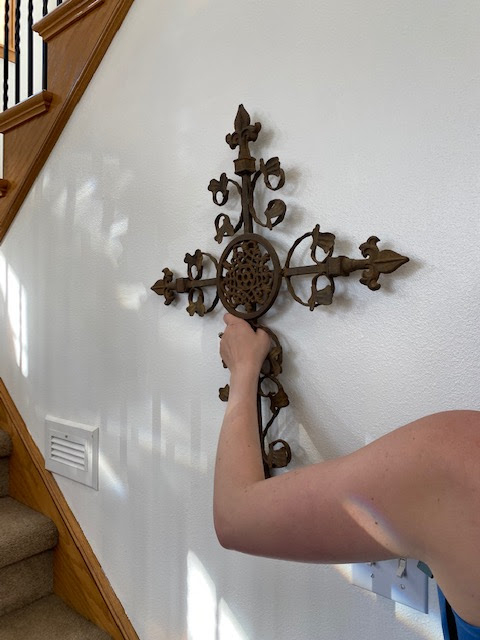 My husband and I continued to search for a table, and finally found a new, hand-carved, mahogany table at, believe it or not, Furniture Row. 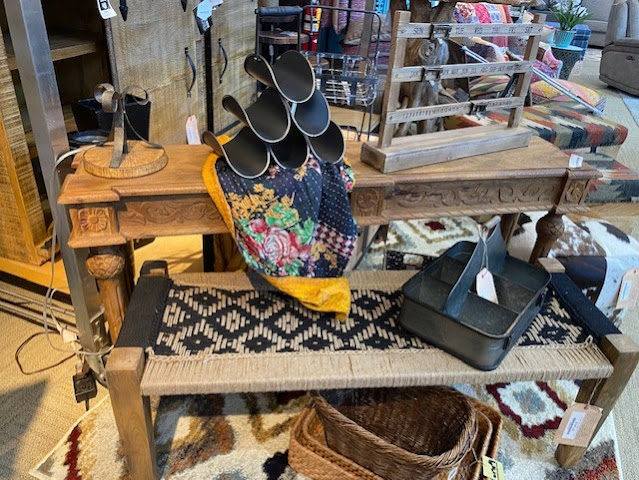 It is 12" deep.  Perfect.  54" wide. Perfect.  Unfortunately, we had to order it, so it won't be here for a couple of weeks.
But altogether, we stayed under $500 for that part of the makeover.
Not in the budget, but equally important, is a piece of art we found one night after we had taken a break from our all-day painting spree. 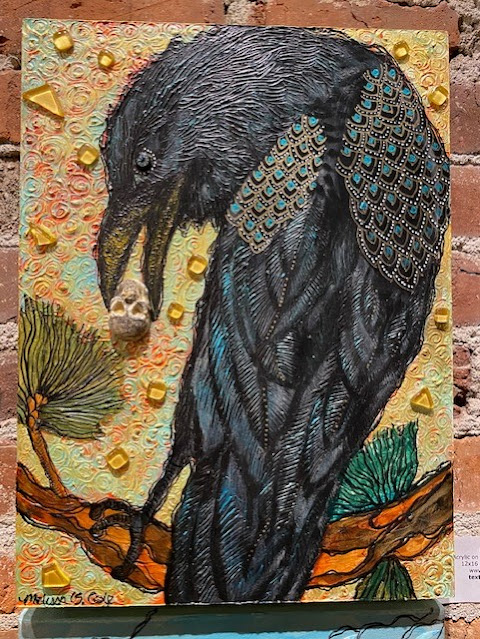 It's by the artist Melissa Cole, an artist here in Spokane.  I had wanted one of her paintings since I found her horse and raven many years ago. But most of her pieces are thousands of dollars. We chanced upon her exhibit the night we were out, and found "Nevermore". It is smaller, so it was in a great price range ($345) for us to finally own one of her works. Oddly enough, I ended up switching to it after buying another piece first.
I do write, and read, a lot of poetry, and have read "The Raven" as much as anyone, so you'd think I would have snapped this one up.  But truth be told, The Raven wasn't a poem I held in my heart. The Raven in it was always too pessimistic for me. Nevermore.  Nevermore.  Yeah, that's not what I think of death--  So, here was this painting called, "NEVERMORE," with this looming raven holding a skull.  I was drawn to it, but also repelled.
Still, I couldn't get it out of my mind.  Why did she paint the raven so large? Why did she name it NEVERMORE? I wanted to love it, but I couldn't have that raven looking at me while I played my piano (that's where it will be) being so pessimistic and faithless.  I have loved too many people and animals to think that was it and it's over.  I have examined my own heart, and I feel there is more to all of this--that there will be a reunion of souls.
And then, I looked harder at the painting--PAST the looming raven, and at the branch he perched upon, with those little tufts of evergreen--and I thought EVERMORE.
EVER MORE
The painting became something completely different.  The obvious thing in life is death. It looms.  It's real.  Everything about it shouts NEVERMORE.  But those of us who have searched the world, and love, and spiritual aspects of existence--have come back with some other small thing to cling to--a branch--a hope--a less obvious, but much stronger and beautiful vision of reunification.
I wrote Melissa and asked if I could switch paintings, and I told her why. Luckily, she had not sold "Nevermore" yet, and it was easy to make the switch. She told me that the skull in the raven's mouth is a bead that she loved that was handmade in Israel.  That's a very important detail to me, and an affirming aspect of my faith.
I can't believe how close I was to walking away from that painting because of my fear and loathing of the looming presence of doubt and death.  I will never look at it the same again.  And, I get to bring it home on the 22nd.
****
You may remember that the renovation began with the shower project.  That is still ongoing. It is my husband's project, and since he had to rebuild the entire shower and plumbing, it has been much larger than we could have known. But, finally it is coming to completion, too.  The highlight being the tile art of Nan Jacobsohn, The Clay Horse. 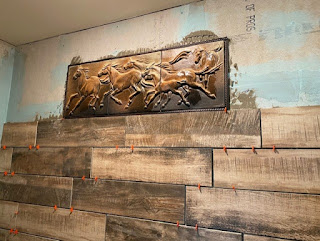 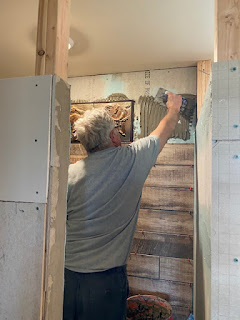 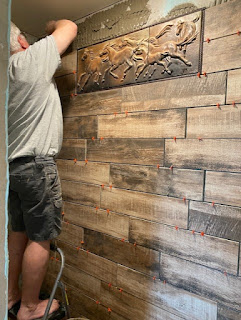 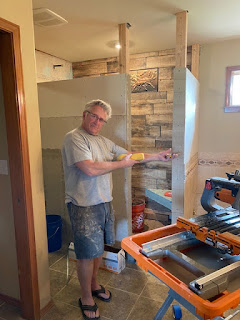 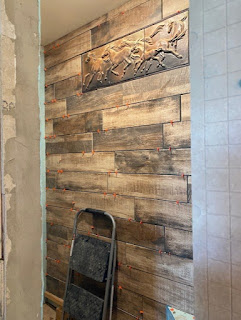 As you can see, there is still a ways to go, but he expects the inside to be finished by next week.
****
There has also been much busy-ness cleaning stalls and turnouts and taking care of all of horses. Leah continues to improve, and is moving better than she was before the injury.  I'm not sure exactly why that is.  Cowboy is struggling with Head Shaking Syndrome, as he always does in spring.  Grazing during the day, and stall rest at night keep it controlled.  The stretching of his neck, during grazing, calms it. Cowgirl continues to grow, but still has a month and a half before the baby is born.
Shiloh, my daughter, is about four months along now, and she had her photos taken with Cowgirl last night.  Both have baby bellies. When those are done, I'll share them.  This weekend, Shiloh is having a gender reveal party, so I'll also know whether the new grandbaby is a boy or girl by the next time I post.
Yay!
*****
I've been reading my old blog posts and found some gems of sayings by Ray Hunt.  I wanted to share them again.
"If you get bucked off or kicked or bitten, you obviously did something wrong, and that's just too bad. The horse, on the other hand, is never, ever wrong". (I've been working with Beautiful Girl again--and I'll post about that later--but this hits the target.)

"When you feel it in here (your heart),
when you feel for him,
when you feel of him;
the confidence can go down through that body,
or you can take it out.”
(Wow! I want to have this engraved on my mind every time I go out to interact with my herd.)
"When a horse doesn't do what you tell him, you think you've lost. It's not about winning or losing. A horse doesn't even know what that means. If something goes wrong, you start over. You have to accept defeat to gain success."
"The definition of confidence is knowing that you are prepared for the unthinkable." (I love this one, too. It's how I plan to build a relationship with Mr T. Prepare, prepare, prepare.)
*****
I got another Mr T update yesterday. Sarah took him out with two others for a trail ride along the river. 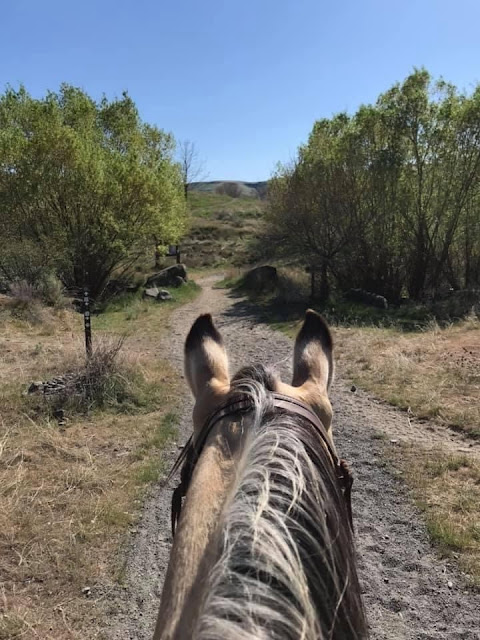 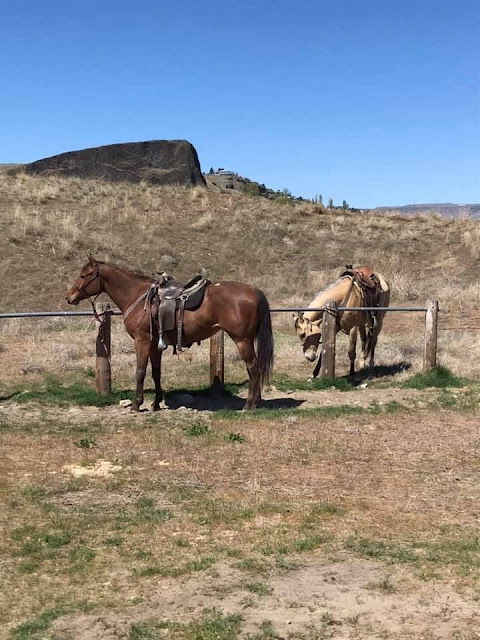 Sarah wrote on Facebook:  mr T did good. Kinda excited at first then pooped out

Uh huh, he's a laid back dude.  Sarah says he likes to go slow, and she has to urge him forward.  So, I'm not surprised he got pooped out early.  He has plenty of get up and go for me, so I don't mind one bit that he tends toward the lazier side.  In fact, that's a feather in his cap!  Just the horse I need for my golden years!
Posted by Linda at 9:03 AM