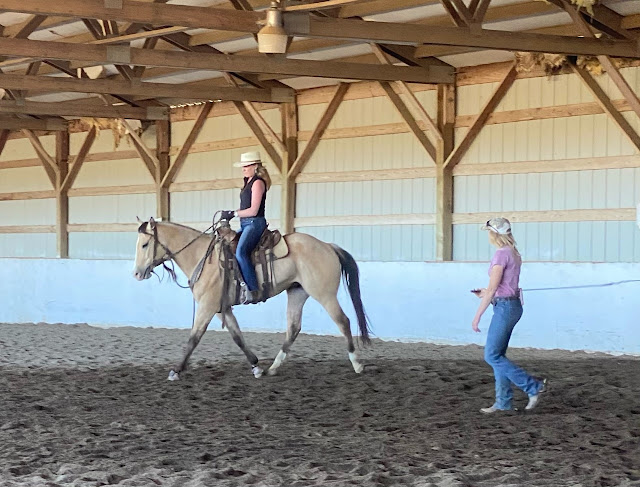 I went to see Tumbleweed yesterday, and was able to take a lesson on him, focusing on the youngster trot.

The youngster trot is a wild beast of a thing. Wonky. Uncertain. Gangly. Very physical. Things you thought you knew, fall apart. But it's very doable. You only have to get used to it, learn your cues, absorb the shock in your feet, constantly push the horse forward, find his rhythm, and wear a sports bra. 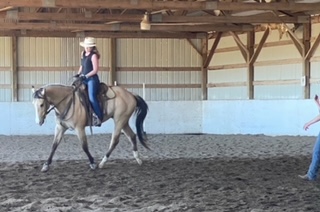 It helps to have your trainer helping from the ground!

"Drop your heels! Urge him forward. Squeeze your legs! Widen the circle!" 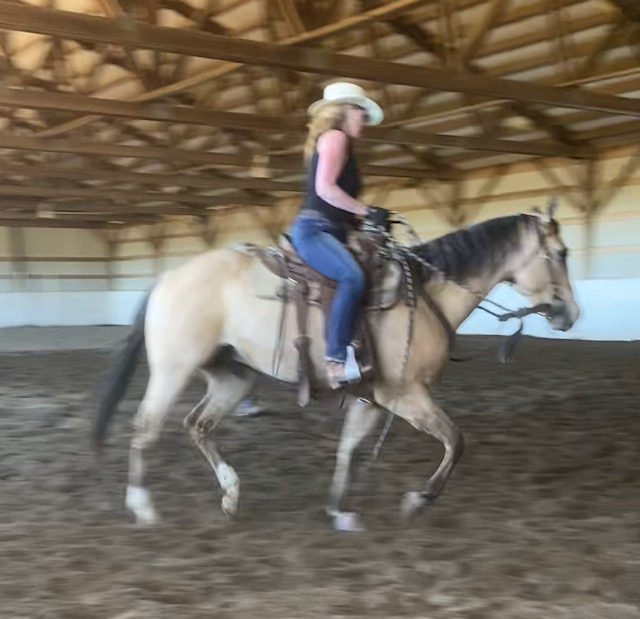 I have a saying that I tell every child I train, "Look down, fall down."

What was I doing, as I tried to navigate a wide circle through thick sand? I was constantly looking down at the footing. LOL.  It's not so easy, is it?!?

By the end of the session, everything was starting to come together, and I could feel his rhythm and he could understand my signals. We worked mostly at posting to his trot, but some sitting of it also, to prepare for the ask on the lope. 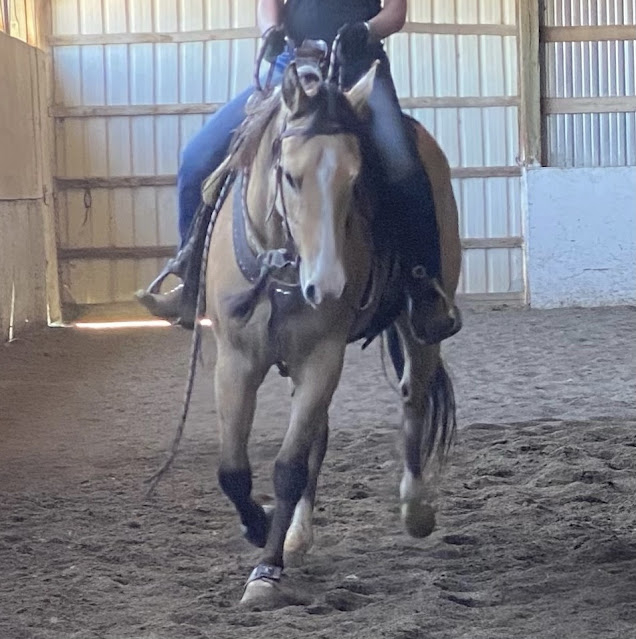 His trot isn't as rough as it was last year. Sarah has really worked on collection and building up the top line. He is also much more comfortable carrying a rider. And, he is extremely sensitive to the rider, and if he feels your balance off, he will stop. In fact, his stop is so built into him--a tuck your butt kind of stop--Sarah is training him away from it. She doesn't want to put too much pressure on his hocks, and I'm not interested in sliding stops.  I can't remember what she called the stop she's asking for now, but I took it to mean, a relaxed cessation of movement. (It’s reassuring that he's the type to stop when you’re in a pinch though.)

My trainer thinks he's a "really nice three year old." And from her, that is high praise. She never has a bad report to tell of him anymore.  It's all glowing.

He has exceled on the trails, even when riding out alone. She says he's better at riding out alone than a lot of the older horses in training. He naturally tucks his hind end coming down hills, too. She said it was really fun to ride because it's exactly what you're looking for them to do, but he does it naturally.

She said he never spooks.  But he did have one hairy incident a few days ago. They were watching some cows, and the cows suddenly went off running and bucking away from them.  Sarah said he spun around--and his spin is lightning fast, but easy to sit, and she just brought his head around in a circle--or a one rein stop.  He calmed and they moved on. She says riding colts, you have to be ready for anything. And, she recommends riding him in a saddle with a deeper seat, so that I can stay in it better if he does spin or bolt.  He is exceptionally bred for quick, catty spins--and he definitely has them in spades. But it's good to know they're smooth and well-balanced, and he doesn’t trip over himself.

Another little warning she gave me is that when her dog runs, he thinks that means play time, and time to run, too. That was definitely trained into him here at home. Piper, our wolfhound, was a puppy when Tumbleweed was a yearling, and they have played a lot together.

She has ridden him during some of her private lessons, and he loves his role. He likes the people, and the other horses. And she says, the people and other horses, love him, too. No surprise.

She told me if I ever wanted to sell him, he'd "go for a lot."  People are looking for geldings with solid minds. But you know, that will not happen.  I have a lot invested into him--emotionally, and he’s my baby.

Sarah said she'd like to have him for 3 months next year, but I don't think I can part with him longer than 2. She said his 4 year old year is when it's all going to come together, and she wants to take him to the ranch and into the mountains to round up cows.  She's booked so solid, I will have to decide soon.

But for now, I think it's safe to say she's having fun with him, and building a foundation I can continue here at home.