A Revealing Blink, A Release, and A Connection

It took Tumbleweed two weeks to settle and concentrate on his work, but he has finally come around. Sarah, his trainer, intends to ride him out a lot this month, but she doesn't do that until they can master their arena work and remain calm, and tuned in, while being ponied. 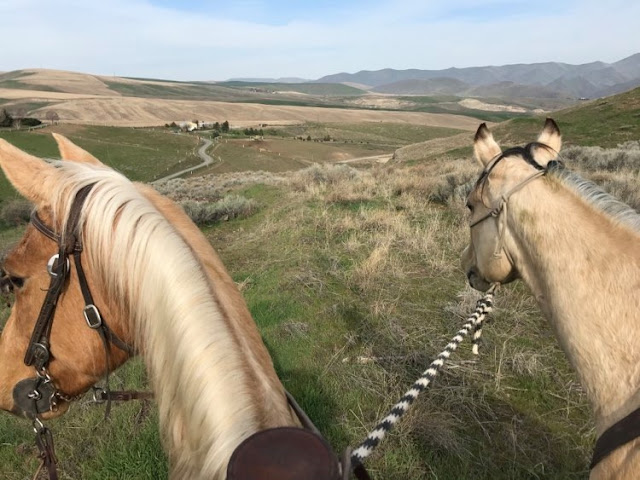 He's young, and all of this is really big for him. That is why I took him down early. Where better to have that youthful energy directed, than training?

Yesterday, she sent me photos with this update:

"Did really good. Scared at first, then relaxed. Was super spooky two weeks ago." 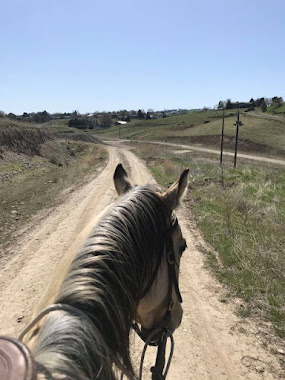 I replied that he's exactly where he needs to be, and she agreed 100 percent! 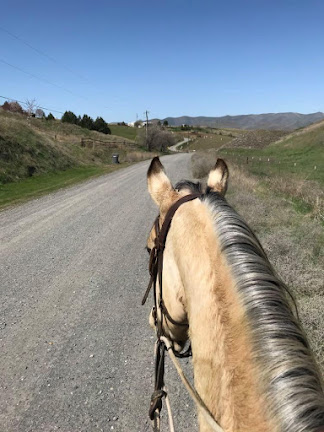 Last time he was down there, he was only rode out once or twice, but this time he should get a lot of it since he has a whole month left in his training!  Yay!  The solid foundation Sarah puts on a horse is just priceless. She doesn't skip steps. They have to earn each and every advancement, and if it takes one month, or six, that's just the way it is.

I know Tumbleweed very well, and I think he is loving it!  Around here, he's always looking for a job--or an opportunity to learn. His mind is like a sponge, wanting so badly to soak in new and exciting things. Whenever I go to get him, he runs to me and practically halters himself.  Well, he's getting it now.

The other side of Tweed is that he is very loyal, and bonded, with his herd and family here.  It's understandable that leaving and adapting to a new a place was difficult for him, especially at such a young age. But the more he does it, and returns home safely after a job well done, the easier it will be for him in the future. I hope he learns that life with humans is seamless. He can go from one place, to the next, and have his needs met. 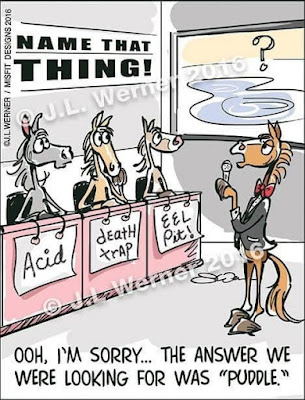 With Tweed being gone, I've been able to concentrate on rehabilitating Leah and working with the others.

I did bodywork with Beautiful Girl in the open arena yesterday. She was amped up, and alert to every little sound. She threatened to bolt away, or even run me over. She was a monster on a rope.

For the last year or so, I've drastically changed my approach to that type of nervousness. I used to let them work it out with physical exercise, like disengaging the hind and front, and working on the line. That's fine, and it works, but I also felt like it was feeding into a part of them I didn't want to encourage. It was as if I was training for a negative, but natural, coping strategy: FLIGHT. 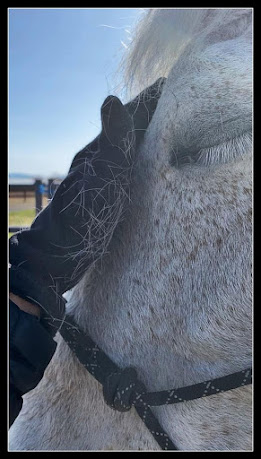 I don't want FLIGHT. I want a calm partnership.

I was determined to redirect BG in the quietest way possible to 1) Reinforce my personal space and stay safe, and 2) Bring down her energy.

That lack of trust, spooking at every little thing, is really another form of bracing. It's the, I'm in trouble and have to take care of myself, mentality. What you are asking of me is making me vulnerable and endangering my well-being. And now, I don't care if I endanger yours.

I had her walk over the bridge a couple of times, and I had to back her up a few times after she invaded my bubble. But with very little movement, the least amount to get the desired outcome of safety, she became calm enough that I could do the bladder meridian work.

I must say, the bodywork with BG took a great deal of patience. I waited such a long time for those first releases, because she was very stubborn about relaxing her brace, and showing vulnerability with me. However, when the first releases did come, things began to change dramatically. Her eye softened.  Her body softened.  It didn't take long before she realized I was listening to her, we were a partnership, and she was safe.

By the time we were done, she was fully tuned in and respectful. It was as if I'd spent thirty minutes working her on the line. In other words, we accomplished the exact same thing, the softness and connection I desired from her, but with minimal "flight-style" exercises.

Leah has been doing this work all year. She progressed from a stoic horse, bracing and afraid to be vulnerable, to the most open and willing partner. She gets it, and she's willing to release much faster now. Her practitioner does 1.5 hour sessions with her, but I break my own work down into smaller, daily parts, with a lot of work at the TMJ.

Here's a video I took yesterday. You can see the blink--that is the subtle sign of their tension. Horses are such stoic animals, vulnerable prey who must never show weakness, lest they be devoured by a predator. But the blink reveals it to us anyway. We first look for the blink, then we wait for the release.

I tagged Sarah (There are 2 Sarah's: one is the trainer, and the other is the Masterson practitioner.)  Sarah K, the practitioner, responded like this:

Yay! And she had an awesome big blink right on her TMJ! Great release responses!

Leah’s living the highlife with her new routine and extra little sessions.

I can tell she’s going to have so much progress.
The best part of doing the bodywork is seeing the results afterward. 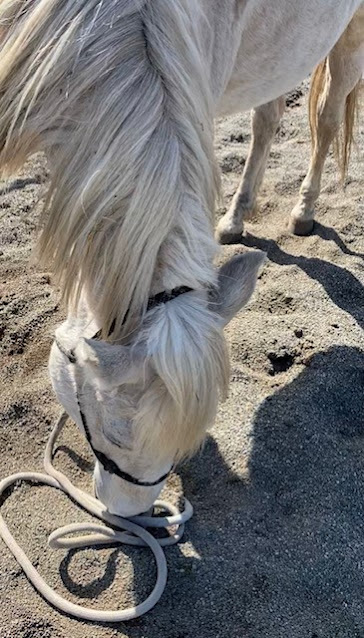 Being able to just throw down the rope, your horse so calm, and tuned into you, that you can experience a true connection. A horse happy to form a partnership.
On the ground, in the saddle, does it matter?  It sure feels the same to me, no matter from which angle I'm looking.
Posted by Linda at 10:13 AM