My trainer is booked out until September, and at that point, she's cutting back from 6 horses a day to 5. Luckily, I got Tumbleweed's 30 day reservation in place last summer for April.  But it struck me that I really need 45 days, to give him time to adjust, but the only way she can give me that extra is to take a spot she will have March 11th.

Of course, I took it!

So, yesterday I started his refresher work. He was FULL of it. 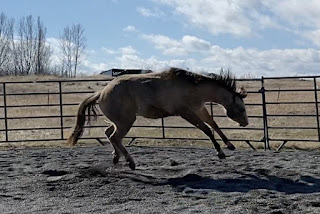 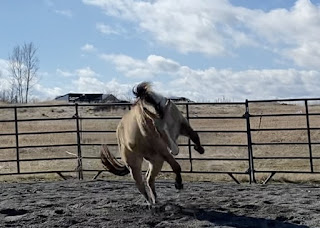 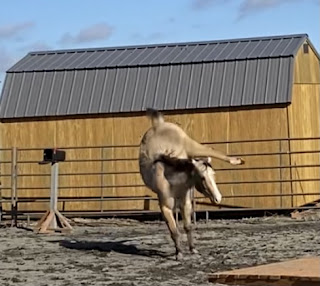 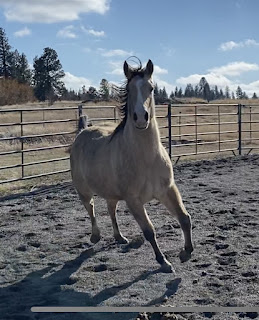 He wasn't respecting my space at liberty. When I'd correct him, he'd run off bucking in a little tantrum.

I decided it wasn't a good time for liberty work, since he wasn't in the right frame of mind, and the trainer will want him to have good manners on the lead. I hooked him back up.  (Surprisingly, he seemed comforted and relieved.) We worked on issues regarding space, as a reminder to him of where he should be in respect to the handler: leading forward, backing up, disengaging in front and back. He did everything very well by my standards. We will probably go back and forth with liberty, but my main focus for the next two weeks will be preparing him for what happens at training.

The night before this session, the grandkids had been here and we worked with the older horses. They were all happy to be groomed, but grumpy about working. I think these extreme changes in temperature have them all on edge. (Foxy even got bucky at one point!)

Also, Tweed had several piles of loose stool yesterday, something I'm always watching for. He has been in more lately, therefore, eating a mix of grasses, but I'm not sure what he was dealing with. I gave him Probios, and today they're back to normal. With a big herd, the dynamics are weird in spring with mares going into heat. Remember how I said Tumbleweed wanted into the stalls? He does seem to want to escape the drama of the mares.

It turns out, this might be an opportune time to send him away for training and get his mind on a job. I'll get him back at the point at which we've decided to remain home for a long, long time--May 1st. The weather should be better, he will be more mature, and I can start follow up lessons with my trainer here.

I'll need to get his booster shots, which is a big bummer because the vet was just out two days ago for a farm call on Cowgirl's boosters.  He had all his immunizations done late May, so under a year ago. Because of that, I think I'll skip strangles. I also need to schedule my farrier to have him shod before he leaves.  Either that, or I need to have him done down there by my trainer's son. (I just messaged her, and she said definitely get the shoes. We chose to have her son do it, so that she can get what she wants.)

On another note, Leah has a little lameness. She is on stall rest. There is no trauma, but she has some heat in one fetlock. It showed up yesterday, a super muddy day, the day after their grumpiness. With a little stall rest, she was doing much better, and better still today. But to be safe, I'm keeping her in the stall. She's happier there anyway, and she isn't allowed on spring grass, so might as well start her confinement. I am considering breeding her this year because I love her personality and, like Cowgirl, she's reaching the end of her breeding years. She would be a maiden mare. At this point, it's just a thought.

Oh, how fast everything is changing with spring so near. The period of rest is quickly coming to an end.