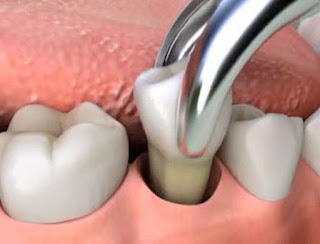 Remember my tooth issues from months past--first, #18 got a crown. Then, #18 got a root canal. Finally, #18 had a broken root, observed during root canal, and #18, it was decided, needed to be pulled.
#18 and I were having a hell of a time with each other. #18 was making my life very, very hard. #18 was dominating my life with antibiotics, pain, dental appointments and expenditures.
So yesterday, #18 and I were parted from one another. It was the first tooth I have ever had "pulled," because I was lucky enough to have kept every one of my wisdom teeth.  I would have kept #18, too. I tried everything before having it extracted.
I went under anesthesia for the procedure because I didn't know what to expect. They started at about 10:05 or so, and, apparently, at 10:23 I was texting my brother. How I was doing that, I don't know, and my text was a garbled mess. It read like this:
Sure. Coming out of Anastasia mid. it
But I have to say, despite my incoherence, I felt great...until the "Anastasia" wore off.  At which point I had a massive headache and throbbing jaw. Bring on the hydrocodone, ibuprofen, and antibiotics! And I slept most of yesterday away.
Today, I'm light-headed, but otherwise not bad. When the nurse called to check on me, she said that the bone grafting material--apparently, from a cadaver (ewww)--is what is causing most of my symptoms. (I elected to replace #18 with a fake #18, for which I needed a bone graft.)
I'm not sure why I'm light-headed today. My husband thinks it's because of the hydrocodone I took last night. (Btw, it will be my last.) Besides my headache, there really isn't any pain. A little in my jaw, which makes me think they must have done some yanking around in there to get the tooth out. But this light-headedness is awful!! I just want to get back to living life.  I want to go snow-shoeing!!
Speaking of which, I saw this article yesterday in the WSJ, written by Betsy Morris:
For Better Health During the Pandemic, Is Two Hours Outdoors the New 10,000 Steps?
The physical and mental damage inflicted by Covid has doctors, researchers and others racing to tap into nature’s therapeutic effects

"Spending time in the woods—a practice the Japanese call “forest bathing”—is strongly linked to lower blood pressure, heart rate and stress hormones and decreased anxiety, depression and fatigue.
Scientists have repeatedly found that human anticancer natural killer cells significantly increase after walks in a forest. In one such study, published in 2010 in the Journal of Biological Regulators and Homeostatic Agents, the number and activity of killer cells increased in a group of twelve healthy men after two walks, each two hours long, in a one-day trip to a forest park in the Tokyo suburbs. So did anti-cancer proteins, according to the research led by Qing Li, an associate professor at the Nippon Medical School. Cortisol in the blood and adrenaline in the urine significantly decreased. The effects lasted at least seven days, the researchers found."
Time in a forest is linked to decreased inflammation, which has been implicated in chronic disease."
"A study published in Nature’s Scientific Reports in 2019 found the 20,000 participants were significantly more likely to report good health and well-being when they spent 120 minutes or more in nature a week. The good vibe peaked at 200 to 300 minutes a week. Anything less than two hours didn’t make a difference."


"Gretchen Daily, at Stanford, thought it would take “a really immersive experience” in nature to produce a significant benefit. As research, she assigned 45-minute walks to each of two groups. One group walked through the hills, the other down a busy, but still tree-lined thoroughfare. “I was shocked,” she says. On a series of cognitive tests afterward, “there was a massive difference. It’s not like they were in Yosemite or the wilderness,” she says, but the hill walkers performed dramatically better. Bottom line, she says: 'A 45-minute walk in nature can make a world of difference to mood, creativity, the ability to use your working memory.'"

It really makes me want to strap on my snowshoes and hit the trails...but currently I'm just too dang dizzy!
Posted by Linda at 9:40 AM