Lost Our Electricity, At Liberty Work, a Pivo Silver, and a Pet Cow

Oh, what a difference a day makes...or 2 years.
As I was posting my latest video to YouTube, I found a 6 part series of videos from 2 years ago where I was doing the exact same thing with weanling Tumbleweed. Although, not at liberty. Let's just say, Tumbleweed never liked the tire bridge.  He'd go over the solid bridge all day long, but something about the tire bridge--perhaps, the squishiness--pushed all his self-preservation buttons.
Fast forward to yesterday: a beautiful, sun-shiney, spring-like, glorious morning! Very different than the day before with its 70 mph gusts of wind--and destruction. We were coming off a fair bit of rain, and the tree roots were soft and compromised. When the winds came, they pushed the big ponderosas over onto the power lines--half of our city and county woke up with no power.
The wicked windstorm was two nights before the "at liberty" day (video below), and we had been without power ever since.
Side note: Only a month before this windstorm, we had anticipated such an emergency, and splurged on a high-powered generator and electrician to wire it into our house. It was one of those expenses you don't have to make, and you question yourself about the wisdom.  Will we ever need it?  The whole cost was about $4,000, but it did, indeed, pay off--and continues to pay off as I write this blog post.  We have internet, heat, hot water, --pretty much everything--yet, our power is still "out."  Since my husband works from home, over the internet, it's even more important that we never lose power. So, yes, it was worth it!  I could hug and kiss our month ago selves!
Yesterday, I was still in my pajamas at 10 am because when you're "without power" the normal rules don't apply.  I'd gone out in the glorious sunshiney morning to clean stalls and check on the horses.  Tumbleweed, being his usual self, wanted to spend time with me, and so I haltered him and took him into the arena, not having any plan.
When you don't have a plan, "At Liberty" is always nice, and that's what we did.  We went over the bridges, through the maze, and over the poles and tires.  Then I spotted my husband coming out to the barn and called him over to tape us do it again.  Tumbleweed followed me over to my hubby at the fence, curious and gregarious soul he is.  I wondered if all that was too much of a distraction for him, but as my husband filmed, he seemed to still have a the earlier connection.
As you see, when we got to the tire bridge, he was like, "No, thank you." And, of course, that's what he'd do...because now we were being filmed!  But I thought, hey, this is a good opportunity to show what happens when you lose that connection--move their feet a bit.  He reconnected and went over the squishy bridge with me.
I didn't exactly consider this an award winning segment, but my husband does NOT enjoy being a cameraman, and I don't blame him. It takes time out of his busy schedule keeping this little hobby ranch going. Was I going to ask him to film again? No.  If for no other reason, things may have only gone worse. And, anywhoo, it's good for you to see the process of getting reconnected, right?
Sooooooo.....a friend told me about Pivo. After researching it, I think it might be an excellent alternative to hubby cameraman.  Not that I had planned to film a session yesterday.  I hadn't.  I was in my pjs, for godsake. But in general, I think it could come in handy.  I could even store it in the cowgirl cave, so that it is always close to where I need it.
I went to the Pivo site and they're on sale. Yay!  But Red or Silver? The Silver says it's 2 X faster.  Hmmm....
I found this excellent, detailed review.
I chose Silver.  They gave me an extra 5% off, too.  Yay!
Note, the reviewer gives us a heads up that there is a new Pivo coming out soon that allows you to plop a remote into your pocket and the camera will track that remote.  It would make the Pivo close to 100% accurate tracking.
But I am not a patient soul, and I assume it will be much more expensive...and I like this sale...so I'm pulling the trigger on the Silver.
PS.
I joined a Pivo Horseriding Community on Facebook.
****
Tumbleweed says he wants a pet cow. 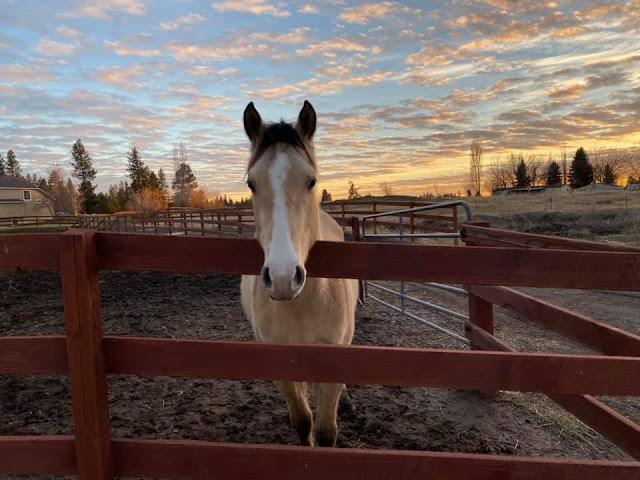 He is, after all, a "cow horse." Right? But I don't he doesn't want to eat the cow. Preposterous! Horses are herbivores!
(Follow this link to the most amazing video of a girl playing the guitar for her cow! I tried to embed it, but it wouldn't work. You won't regret it!)
I could play the guitar, and sing for my our cow, and Tumbleweed could herd him around all day.
Oh, the joys of owning a pet cow....❤ Did I mention I want to bottle feed our pet cow?
Posted by Linda at 10:14 AM