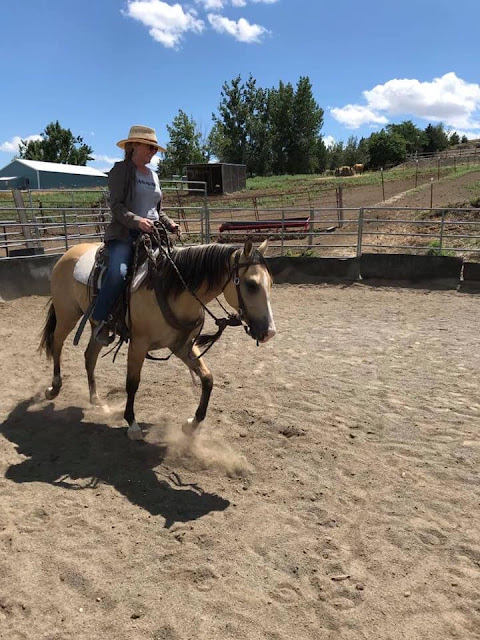 On Friday my daughter and I drove down to Clarkston, WA to pick up our horses--Cowgirl, after getting a tuneup and being bred to the appy stallion, and Tumbleweed, who went down for what I call "kindergarten."

Before I sent Tumbleweed down for his 2 year old training, I did debate the pros and cons of sending a horse that young, and I realized he was an immature 2 who still had a lot of baby characteristics.  But I also realized that his mind was a sponge for learning, and what he learns now, good and bad, will stick with him for the rest of his life.  In fact, Cowgirl, my daughter's horse, got 30 days with our same trainer, 14 years ago, as a 2 year old, and that's all she ever needed until this last "tuneup."  (But mares are different, and she was a much more mature 2. Tumbleweed will definitely need a follow up next year. Also, the only reason she needed a tune up is because my daughter was finishing up her college and neglected her the last couple of years.)

The first week of Tumbleweed's training was really just "weaning" him from Foxy mama.  I added on 10 days to make up for that.  Sarah, the trainer, thought that was a good idea, and she said that he was really just starting to absorb the lessons in the final week.  However, it was also ending at the perfect time, because he was about at the max of what he could handle for now.

So, what did he learn and accomplish at 2 year old kindergarten?

1. Weaning from Foxy Mama and learning to self-console and be indepedent.
2. Standing tied all day long, when he wasn't working.
3. Loading in a trailer and backing out of the trailer.
4. Picking up all four feet and standing still, like a gentleman, for the farrier. (1st set of shoes, he did awesome!)
5. Respecting space.
6. Bending, disengaging front and back. (Lots and lots and lots of that. It's one of the foundations of Sarah's work.)
7. Ground driving.
8. Carrying a saddle, bit and bridle.
9. Trimming bridle path. (She worked on him with clippers everyday, even if it was just turning them on and holding them against his skin.)
10. Being ponied and showing respect while being ponied.
11. Being ridden at all three gaits.
12. Stopping, backing up, understanding leg cues.
13. Inroduction to spurs. (The only time he ever kicked up was when she first had to lay a spur on his side. It shocked him.)

One thing about my trainer, Sarah, she will give you an honest assessment of your horse at the end of the day.  Some of it, you'll be proud, and some of it, you'll go, ugh.  You just have to be ready for the truth of the current snapshot.  It might change next year--in fact, it probably will change next year, and the next--but some of it is their personality, and may remain forever.

Regarding Tumbleweed:  I'll give you the bad report first.  He's butt high and and gangly, and she warned me that his trot is rough.  She wasn't kidding.  It almost shook me out of the saddle as I tried to sit back and ask for the lope.  It's what I laughingly refer to as a "jackhammer" trot.  But Sarah is used to riding two year olds, all day long, for thirty years, and she knows how to sit it and absorb the roughness in her feet while letting the rest of her body relax into it.  He will continue to grow, muscle up, and the front will catch up with the powerful back end, and that will all change.  So, no big deal.  For now, she says it's probably best that I continue to work him at the walk--and leave the loping to her next spring. He did amazing when I lost my balance (something I'll get to about his POSITIVE list) but if I were to come off working on that transition, it would set his training back.

Now, I could put this in the PRO column!!  In fact, for me, it is a pro.  I can handle lazy much better than hot.  Sarah, though, had to introduce him to spurs to keep him going.  When I rode him, I had to constantly urge him forward with my legs, and smack his butt with the rein. I need to ride him actively and keep him turning, and walking, and learning how to balance a rider AND listen for cues. She says I only need to do that a couple times per week so that he remembers his lessons.

My feeling about it is that he was trying so hard to think about everything and do right--he was more mentally exhausted than physically.  When he felt me coming off at the trot, he slowed down and tried to catch me.  So, he's really wanting to do right by the rider, too.  That's a lot to think about for a young colt.  I believe that when he matures in body and mind--he's going to feel comfortable in his work and eager to move out.  Even the little bit of time I had with him, in the arena, he was already starting to walk out faster for me.  And since I'm a trail rider, I think he will learn to love moving out, and exploring the world, on the trails. 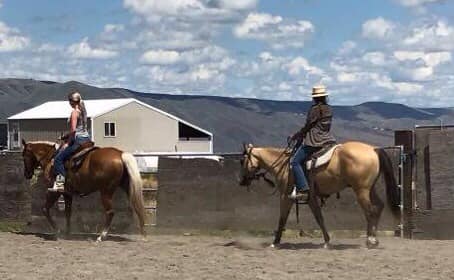 In the photo above, you can see how he is sloped down. That's why his trot is so uneven.  Light work at the walk, while he grows into his body, suits me just fine.  We followed Cowgirl for a while, and then I asked him to move away from her and walk opposite. 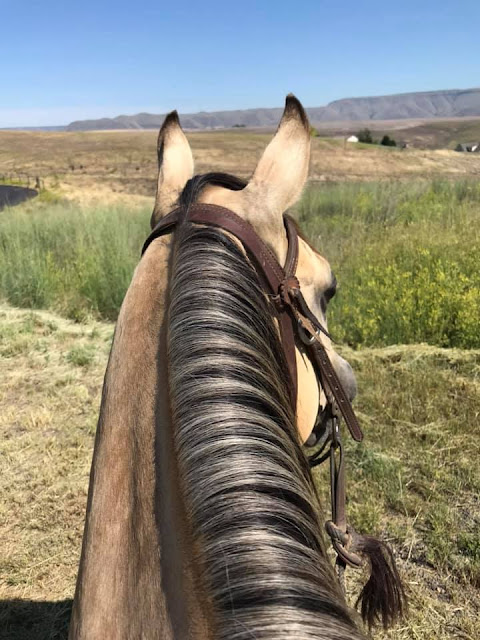 So, the pros now.  Laziness, for me, is a pro.  Also, he doesn't spook.  ZERO spook. She said he never spooked at anything, ever, and when I was riding him, I noticed the same thing.  Even when I started to come off, something that would have freaked most young horses out, he held steady and got me back on. Sarah rode him out, and she said even away from the property, he spooked at nothing.  In the time she rode him in saddle--3 weeks of light work--he never reared, bolted, or bucked.  The worst thing he did was kick out when he felt the spurs for the first time.

For some reason, the "stop" came slowly to him, but when he got it, he'd put his back legs underneath himself and stop on a dime. (Wonder where he inherited that ability. Daddy and mama, for sure.)  He has a genuine interest in cows--again, bred into him.  His lope is dreamy.  She said he has natural collection.  She just throws him the reins when he finds the right lead, and off he goes.  I experienced it in the roundpen, and it is wonderful.  Finally, she said he is extremely smart, learns fast, and retains it.

One thing about Sarah, she gives a colt a ROCK SOLID foundation, and she doesn't sugar coat anything in her assessment. The fact is, you don't really know what you've got with a baby until they're put to the test.  A bucker might always resort to bucking.  A rearing horse might always resort to rearing.  A spooky horse, might always contend with spookiness.  Almost everything can be worked around, but you have to ask yourself if you have what it takes to get past it, should they resort to that particular thing in a pinch.

Another thing about Sarah--she's not their "buddy."  A horse like Tumbleweed, who had nothing but oohs and awws and hugs and kisses his whole life--gets humbled.  When he entered her world, the days of "something for nothing and your kicks for free," were OVER.  You get one thing with Sarah--release--and that comes when you give the right answer.  If you're not training, you get REST.  Rest and release and a few good boy pats when you're extra special are about the extent of your "spoiling." 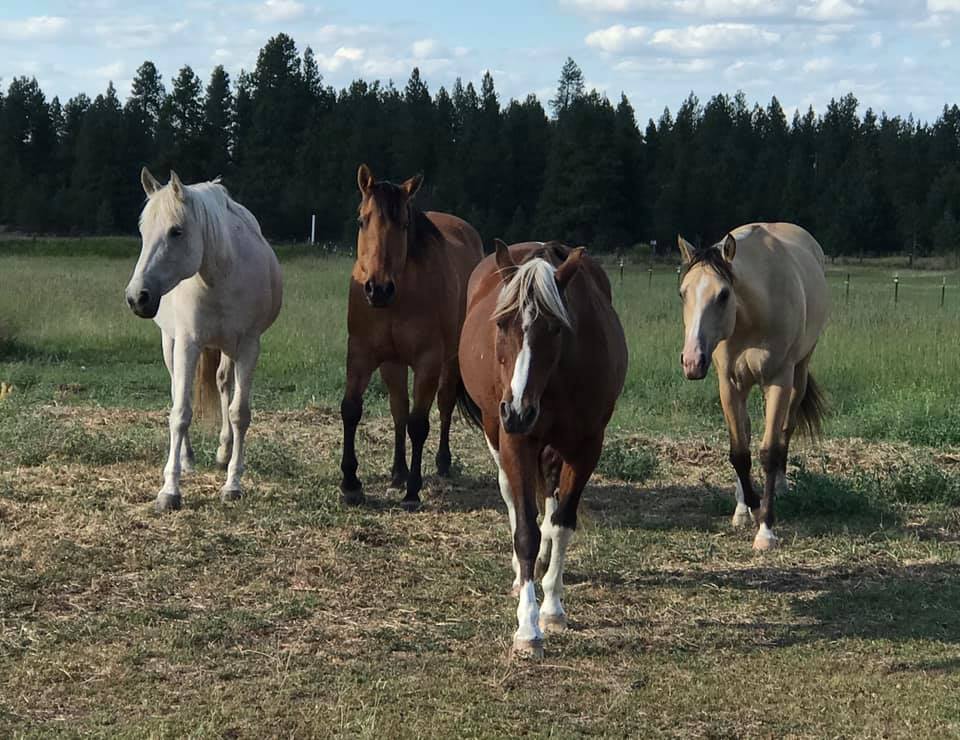 Sarah told me to give him a week off to rest and reflect on what he just experienced, and then start him back up with bending, releasing, and walking--working off the leg--stopping, backing--just the basics--a couple times a week. Haul him away a lot--to keep him from being herd bound, and do a lot of ponying on the trails so he gets used to it.   He has a date to return next April and build on the training.

For now, I have to set up a bridle and snaffle for him and find a saddle that is narrow enough, and a skirt small enough, to fit on his back.

I will also have to invest in a heavy duty sports bra.

It sure is good to have him home!