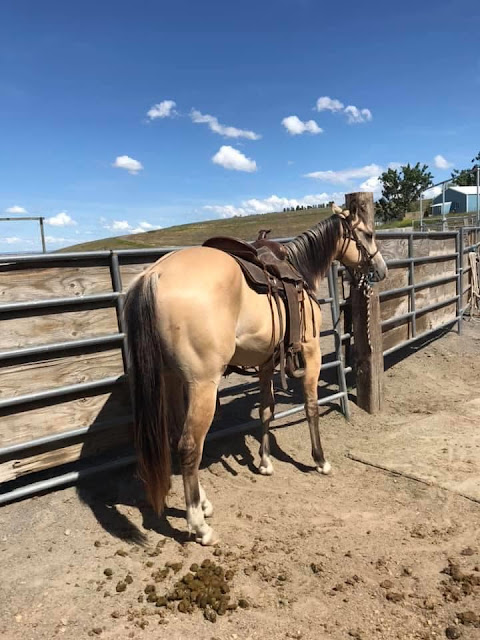 (Tumbleweed learning to pack a saddle and bridle. This was the first week, and I guess he went around kicking the sides of the roundpen and crying for Cowgirl!)

It's been a while since I posted. My, how time flies!!

Tumbleweed finally settled in, and I went down to see him and had a lesson. 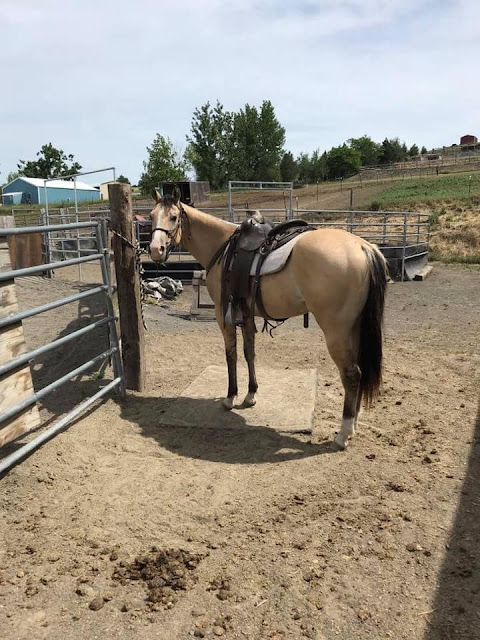 (Standing tied the day I went to see him. 2nd week.)

He remembered me, of course, and it didn't take long for him to start rubbing his head on my arm, like, "Oh, you're the mommy who lets me be naughty!" He laid his nose in my hands and just rested it there, but after a few minutes, he gave it a little love bite, and got moved out of my bubble. That was two weeks into his training.

While there, I got more of an update on those hairy first few nights.  Apparently, he was throwing a fit for the record books. He was rearing in his stall and banging his head around because he was so upset he wasn't paying attention.  I told her I was glad she hadn't told me all of that because I would have been more worried. 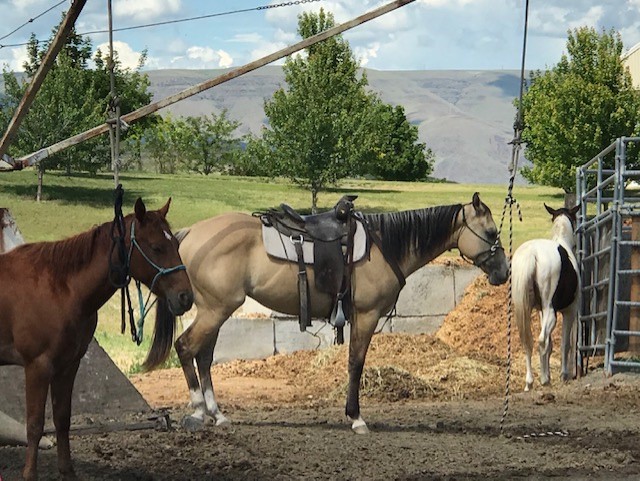 (Standing tied after our session. 2nd week.  Relaxed and resting.)

Sarah was ground driving him in the arena, and then she bent him well in both directions, put weight in each of the stirrups, mounted, and did some serpentine work in the arena--just patting on him, and giving him praise.

A few days after that, they were doing trot, lope, and gate work. She thinks he's smart, and just needed time to grow up and get used to being "weaned."

But because it took a week for that big emotional step, I decided it would be better if he could stay another couple of weeks.  Luckily, another client was willing to put her training off, and I'm able to keep T'weed there until mid-July.

Sarah thinks he's a solid colt, and as long as I'm doing light riding without a lot of stopping and starting, he should be good to ride.  That is really what changed things in my mind.  I had been thinking it was only kindergarten, but turns out, he is able to make more progress, and I will be able to follow up with him up here, rather than just putting him back out to pasture.  I needed her to put more time on him and give him a foundation I'll feel confident building upon.

He's doing better at being alone. 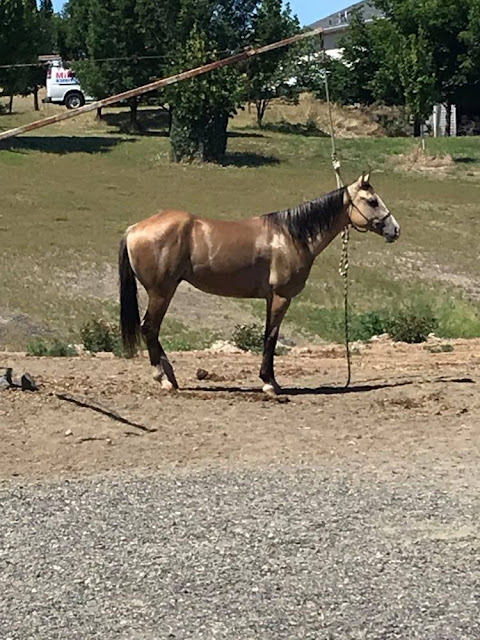 (3rd week. Standing tied after being hosed off.  Looking at the cows.)

She says he likes to watch the cows.  He also needed shoes, now that he will be there longer and be ridden more. Oh, and she said he has a nice lope--it's "smoothe and collected."

She did say he has a tendency to get lazy, and she has to get his attention.  I've seen him be lazy, too, being led, so I wasn't surprised. And, it's getting hot, which makes them all lazy.

At Sarah's, they spend a lot of time standing tied.  As I was leaving, a couple of weeks ago, I realized her trainging comes down to lots of "R's".  (These are my "R's, from watching Sarah train--she doesn't refer to it this way.)

1. Respect. She doesn't treat horses like pets. When they're there, they have to respect her space and listen for her, and they do.

2. Relax / Rest. She likes for the horses to stand tied a lot--and just chill.  She also gives them lots of time to relax during a training session.  It's always about building very slowly, and incrementally, so they experience success each step of the way.  She doesnt' rush it.  They get where they get--no time table.  She absolutely will not progress to the next step until they are relaxed at the current one.

You can tell the horses like it.  Tumbleweed clearly trusted and looked to her, and when she tied him up afterward, he was quick to cock a leg and take a rest.

3. Be Ready. Sarah is always wanting her horses to pay attention and wait for direction.  They are mentally ready and in a learning frame of mind.  Plus, as I said, they are adequately prepared -- and truly ready, and excited, to learn more.

4. Which leads to the "Riding" mind--the last "R".  She says she would never get on a horse that hadn't progressed in all those ways.  It might seem slow, and I'm sure she could do it much faster, but she's giving them a foundation they will take with them the rest of their lives. And rushing them won't help get there. Nor, would it keep her, or the horse, safe.  She has been training for many years, and has avoided injury by being smart in how she progresses. 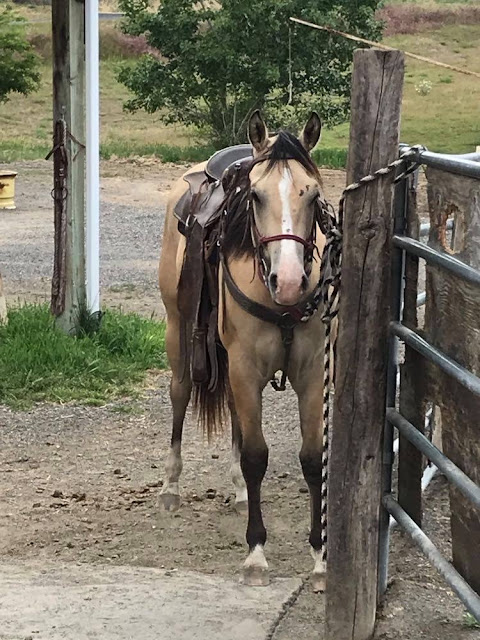 (1st week. Standing tied, watching Sarah ride another horse. His look: "There's a new sheriff in town." And you can see where he had banged up his face.  He has thin skin and his fur easily rubs off to reveal his daddy's black.)

I will see him again when I go to collect Cowgirl at the month point (June 30th), but I know he's in good hands and learning far more there than he would here.  The further she gets with him, the better I'll feel about continuing it when he gets home.
Posted by Linda at 3:17 PM 10 comments: 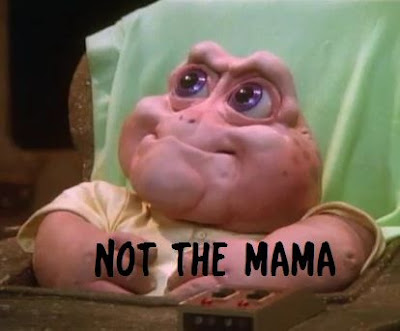 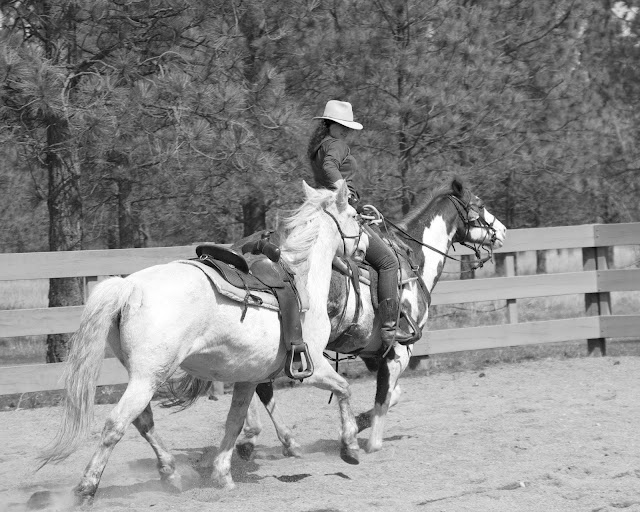 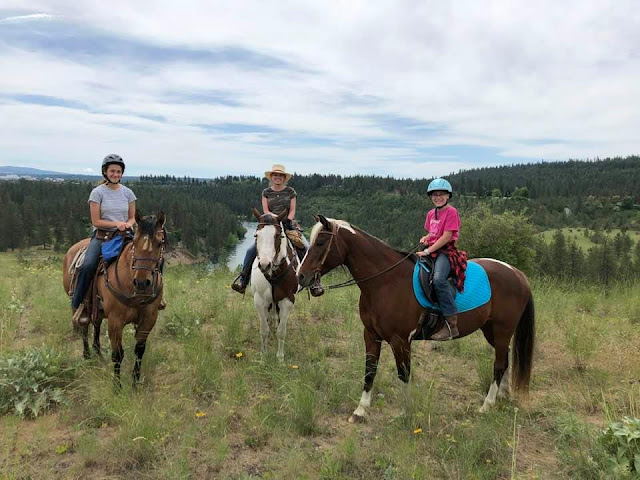