The day finally came--I had to bite the bullet and buy a new horse trailer.  The one I had had served me well for almost two decades, but after being stored out in the elements--open--it gave up the ghost.

It's a long story, but the short version is this: one of the dividers broke off (the weld broke) when I was loading horses last Friday.  The force of it dropping frightened Cowgirl, and she pulled back on me while I was holding up the other end. I was able to get out of her way without getting crushed, but I did receive a blow to the foot and a shove into the side of the trailer that left my arm bruised.  My toe was split open at the bottom, from the force, and the bone either bruised or broken, but we don't know because my husband closed it with butterfly stitches and taped the toes together--which is what they'd have done at the hospital.  It's healing so well, I'm thinking it was bruised. The cut, however, will take a while to seal back up. Minor though.

Somehow, I was able to hold onto the divider and pull it out of the trailer to drop it and escape.  She stopped pulling back and stood to be untied. I limped over to a fence and pulled off my boot, which was drenched in blood and made me want to puke--because I hate blood, and I thought the bone was coming out--but it was actually the white, fat of the toe--which is funny, in retrospect.

The whole thing is what you call a "train-wreck" in the horse world.  Something you never want to see happen. People have died from less.  Horses have been injured from less.  Neither happened to me, or my horse, and I am grateful.

But there was no way I was EVER, EVER, EVER going to haul in that trailer again.  Two days later, I was driving to Kiperts in Olympia, WA to buy a new Logan. (They were highly recommended, and for good reason.)

Here it is, my newest and most important piece of equipment: the 2019 Logan Edge 3-Horse Slant trailer. 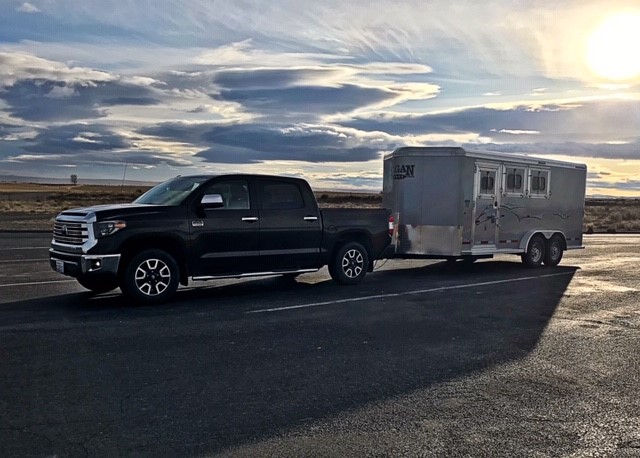 Since it's a 2019, we were able to get a substantial amount taken off the price, which put it in our range and, since it will probably be the last trailer I buy, I wanted it to be solid enough to take me another couple or three decades.

As for specs, I needed the widest stalls they had standard (no time to custom order), and the Edge boasts 3, 40" stalls with drop down windows and bars. Since the trailer is 7'3" wide, the diagonal lengths of the stalls are also longer than most. They close with slam latches. (To get that extra width, they incorporate a portion of the wheel wells, which you can see in the photos.) 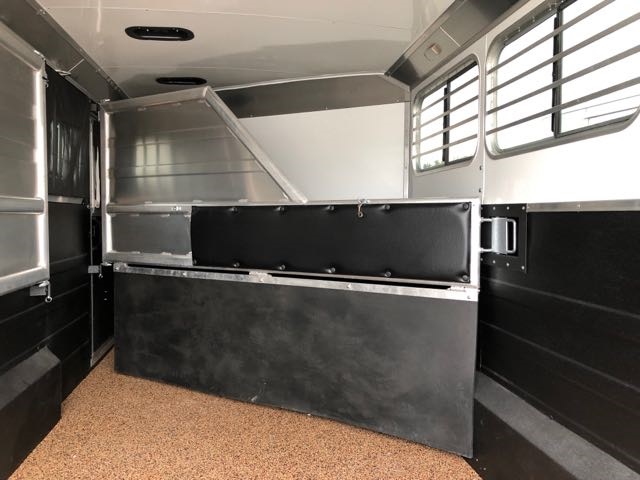 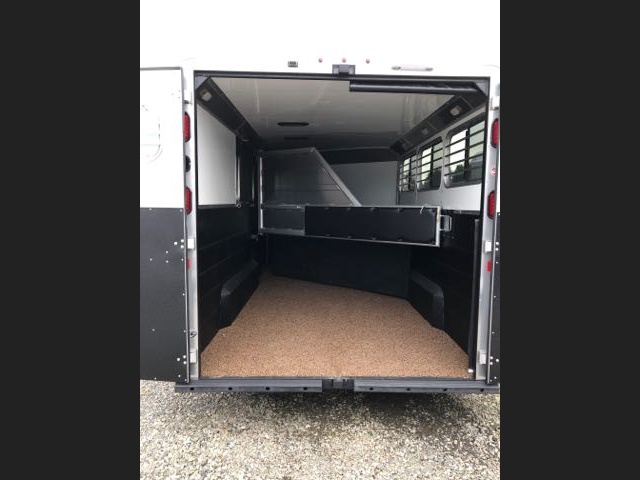 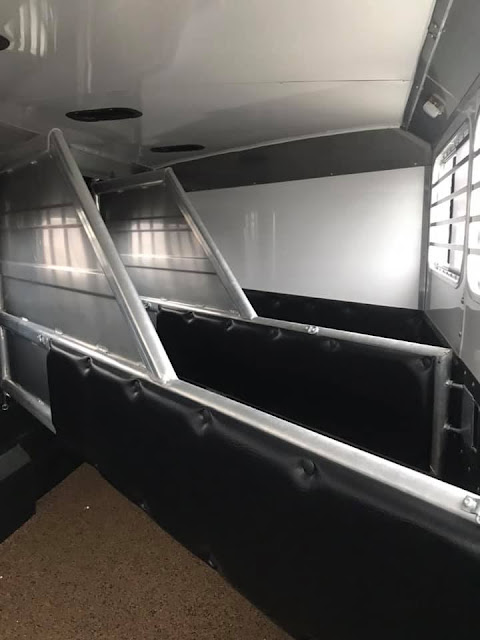 I didn't know I needed the front door, but the benefits of being able to haul more gear when you only have two horses and can keep the first slot empty--and of being able to get to the front horse, if necessary, without unloading the others, was a good selling point. (Oh, and don't forget the logo--gotta love a horse logo--it's a $900 option from Logan, but comes standard on the Edges. I think it should be on all their trailers). 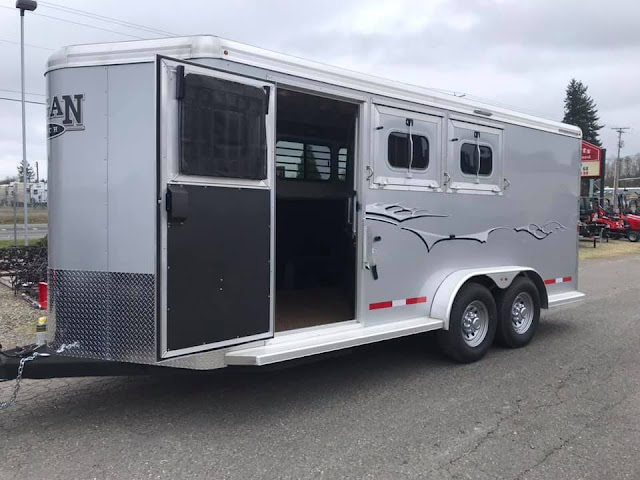 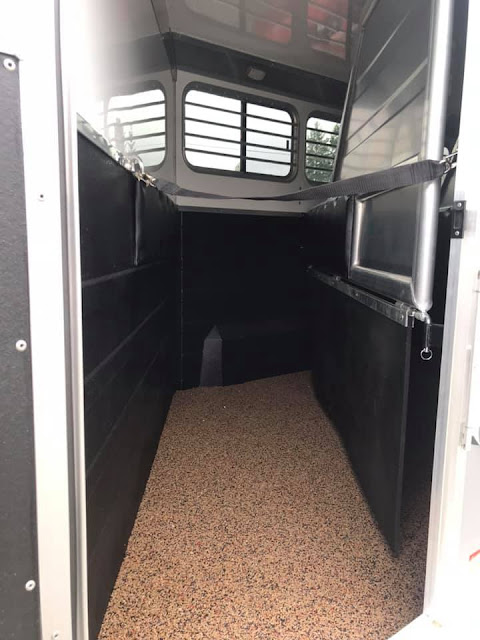 It also has double back doors with windows, bringing in more light for the horses.  Again, not something I thought I needed, but it sure makes a difference in an enclosed trailer. The off-side windows slide open and have screens. 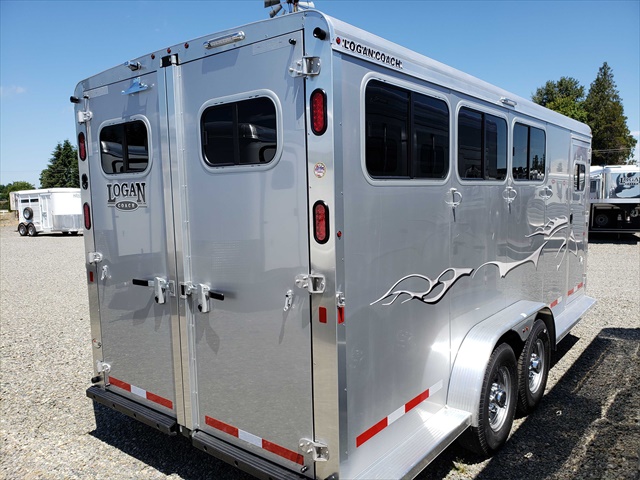 All the doors have latches and stoppers to keep them open.  I've already tested them against the wind, and they hold great.  The Edge also comes with low-profile LED flood lights on the outside. They're as bright as I will need them.

I'm more of a wood floor person, but the Edge wasn't offered that way--it has their their aluminum, whiz proof flooring.. 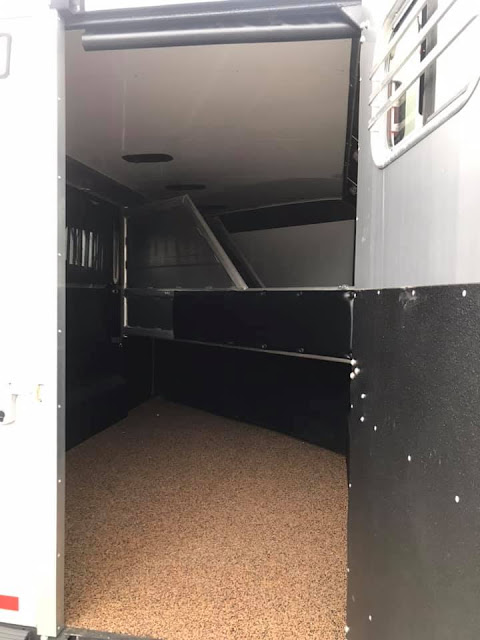 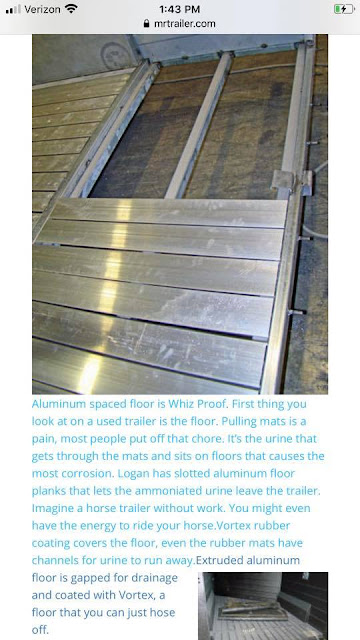 Many of my friends have it, and they all love it.  They say it cuts down on the odor of urine, it's easy to clean, and it drains well.  If a horse paws a hole into it, they sell an epoxy form of it that you can mix and apply at home to patch it.  (I'm sure we will be doing this.)


Here's more information on their website. Suregrip Permanent Rubber Floor.  We shall see how I like it. The jury is still out.  Advocates of wood floors say that aluminum has more vibration, thus more stress on your horse's legs.  Some of the people I know who own Logan Edges disagree. Has anyone else had experience with them?

I got in the back and had my husband haul me around so I could get a feel for what the horse's feel.  Ahem! He went over a speed bump too fast, and I have yet to forgive him for that, but I'm getting closer.

The trailer is aluminum on steel frame with triple walls and insulated coach and tack room.  The tack room also has an extra 1', plus the extra width of the trailer.  It is slightly bigger than my old trailer's tack room.  There is no way I could have gone any smaller. 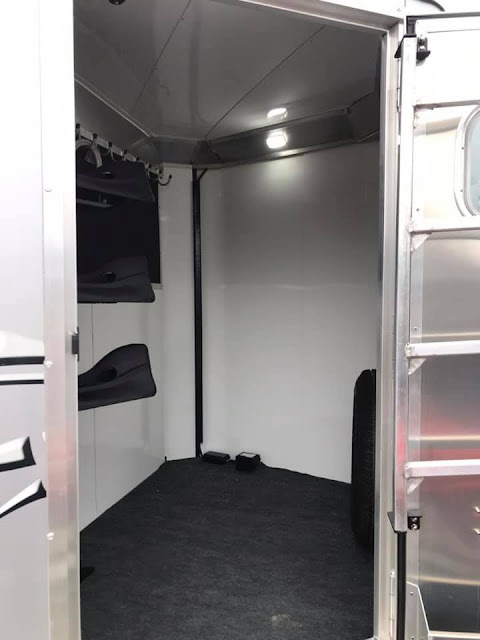 I love the window on the tack room door.  The room is large enough to be a comfortable size dressing room, and the natural light and breeze (when screen is used) is wonderful. My husband is installing a 12 volt deep charge battery that will operate all the LED lights without the trailer being run by the truck. It's super simple. 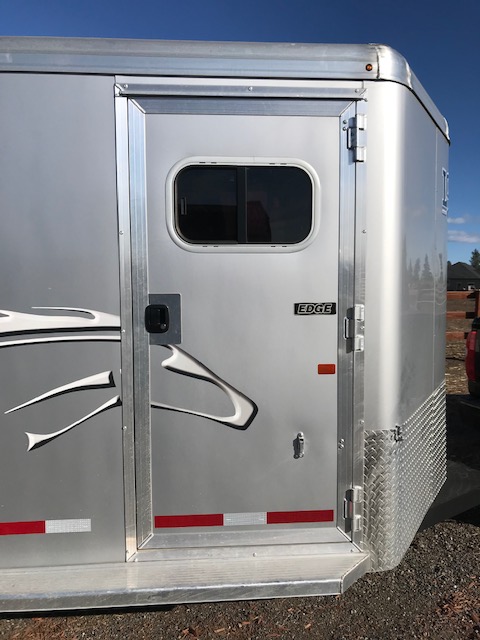 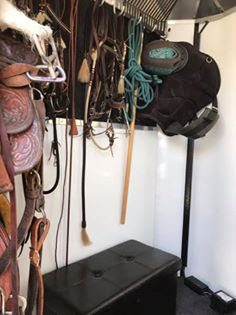 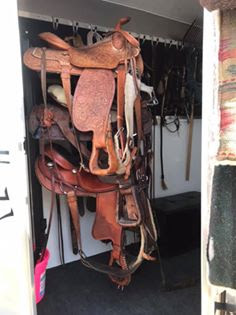 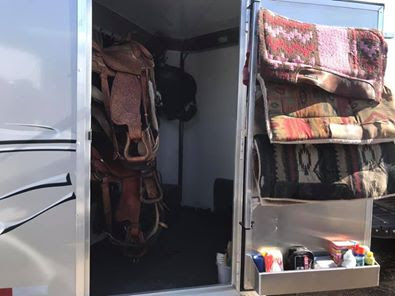 I didn't think I'd like the swinging blanket bar on the door, but it turns out I love it.  It gets the bulky blankets out of the trailer space, and it puts them out in the sun and breeze to dry off and air out!  I found that my tack room is much more orderly and spacious with them outside.  It's also good because when you swing the saddle rack out, you can discard of both items, saddle and blanket, without climbing into the trailer.

As odd as it sounds, right after I purchased the trailer, I wasn't really feeling the joy.  My head was swimming with horse trailer images and factoids, and I even dreamed of horse trailers for two nights. Horse trailer nightmares! Blah-humbug.

But when I put them side by side, and walked back into my broken down, rusted old trailer, I realized it was the right thing to do, and my trailer had become a hazard.  It is so bad, I've decided not to sell it, but to keep it, instead, as a utility trailer. 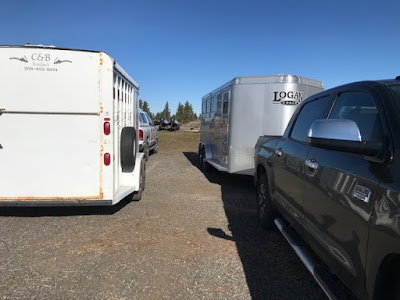 And here is Tumbleweed checking it out. He jumped right in. 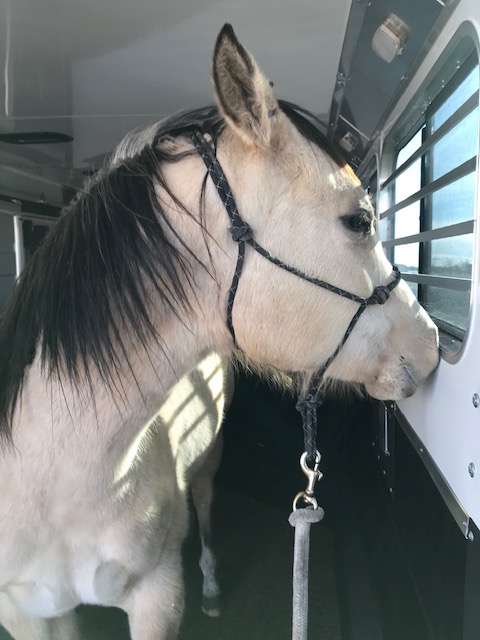 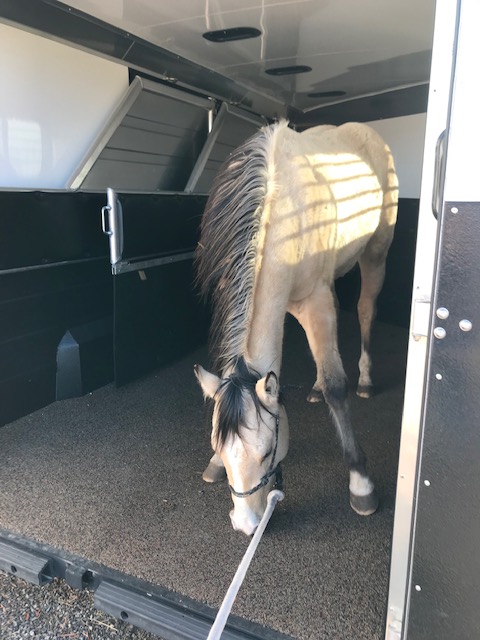 Update : I have used the new trailer now, several times, and I love it.  It's so much sturdier, and when the horses move around, there's very little movement. The tack room is just wonderful. The flooring--amazing!  I love it.
Posted by Linda at 2:00 PM