She will not be
the first I've lost,
Yet, there's still much water
in this rock of letting go. 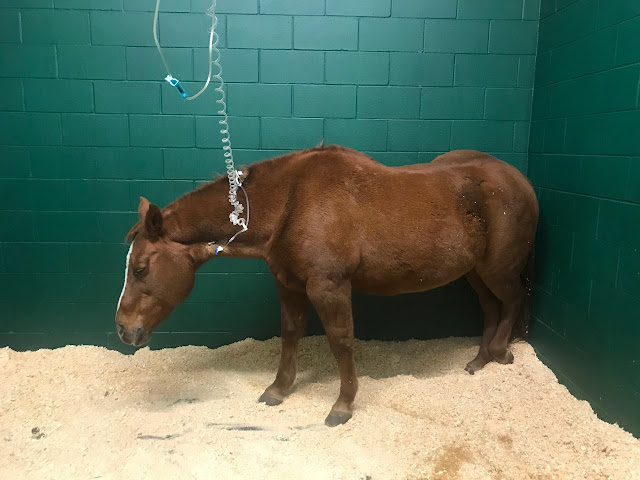 (Penny the day after IV fluid and plasma.  She is not sedated. When we walked in, she didn't even look up to see us. Death's door.)

A couple of weeks ago, we were riding Penny and Cowboy out on the trails... 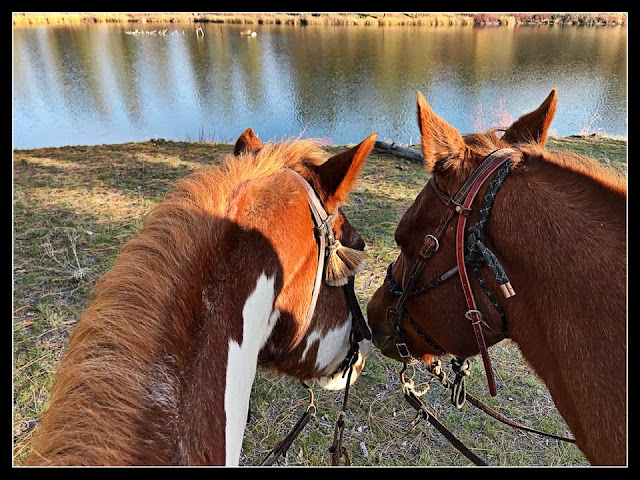 and then tragedy hit.

I woke Thursday, November 7th, and saw Penny lying down. Never a good sign.  I was immediately off to the vet, and she was ultrasounded, fluid tapped from her belly, colic exam, & blood tests—diagnosed with severe typhlocholitis and peritonitis.

The outlook was very poor, and they pulled me aside and told me just how dire it was, but to be honest, I didn't understand half of what they were saying.  My husband is a physician, and he did.  He reaffirmed--it's dire. It's really bad. Ignorance is bliss, all I saw was the road to recovery.

They kept her at the hospital that night and administered IV fluids and plasma (her blood had lost protein and only plasma could bring it back up) and there was heavy inflammation of the GI tract--something I didn't understand then would be most difficult in the recovery phase.  They also gave her heavy duty antibiotics (Gentamicin --which is not recommended for animals that sick and weak, but we had to go nuclear on the bacteria-- & penicillin)  The bacteria, which had migrated from her colon through, they assume, a perforation (though by what, we don't know..cancer, ingesting something sharp) that bacteria had entered her gut, and worse, her blood stream.

To bring into even simpler terms--getting her past the bacteria infection was doubtful. Getting her past the secondary issues--high temperature (laminitis), antibiotics (liver & kidney failure, diarrhea, loss of appetite), primary problem (the X factor--the colon needed to heal so that bacteria didn't keep leaking out.) AND worst of all, from the inflammation--the very definite possibility of ADHESIONS.

For those who don't know what adhesions of the gut are--I won't be of much help.  My husband keeps drawing me diagrams and, of course, the vet tried her best to explain when we arrived the second day and Penny had deteriorated even further.

You can read all about ADHESIONS here.  But to put it in a way I understand, you know why most colic surgeries start out successfully, but then the horse never fully recovers--adhesions.

So to recap: when we arrived the 2nd day, Penny had gone WAY down hill.  Even without sedation, she didn't recognize us as we entered. She's at least 24 years old--so an elder equine, and the vet gave her a poor prognosis--especially because many of the secondary issues don't show up until later--but are a very likely outcome.

Vets don't tell you what to do, but when I asked mine about euthanizing--she was very supportive of that decision.

This is getting long because this has been a LONG road. I'm going to speed up the telling--

Made the decision to euthanize, walked Penny out of her confinement, the sun hit her, she perked up just a little, walked her to the kill spot with doc and tech, Penny started grazing. I started to change my mind, especially finding out she was drinking on her own. (She had gone off food at the hospital, but not water.) I asked if I could take her home, the vet said yes, but she would probably die.  I decided to give it a chance because at least she'd die at home with her buddies. Vet discharged us with all the medicine & very specific parameters for euthanization should X of Y or Z occur.

I went home and got my trailer and truck, came back to get her, (again in confinement), and she had broke out in full body sweat--(toxic episode) but I loaded her up and took her home anyway.

Upon arrival home, the sweat had dried and she was relaxed and happy.  Her temp had returned to normal, her heart rate had decreased and she was HUNGRY and eager to see her buddies. HUGE TURNAROUND!)

(That's what LOVE can do for you--the best medicine.  Horses are herd animals, and confinement is one of the worst things for them--but sometimes necessary. I always cringe to leave them behind at the hospital for that reason.) 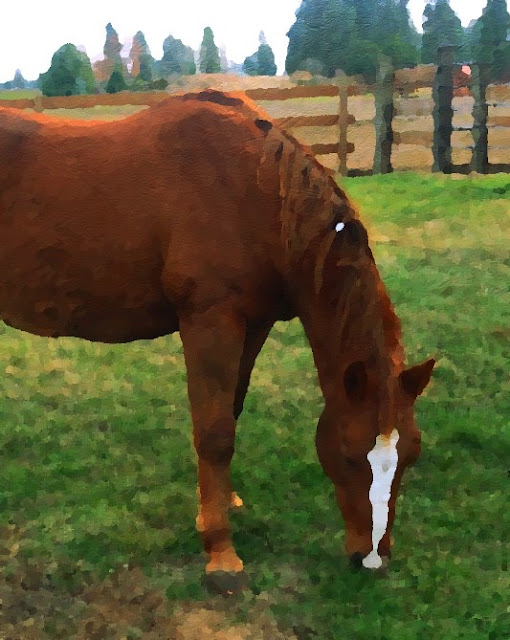 (Penny, moments after arriving home from the hospital)

Unfortunately, that initial boost was temporary.

It has been a roller coaster, with days Penny is comfortable, but appears to be on death's door, and days where she looks like she's walking back toward life. My husband and I administered Gentamicin and penicillin IM for a week (that is a lot of poking), and her fever broke for good on the Monday following hospitalization. We discontinued half doses of Banamine ASAP to lessen the load on the kidney and liver and to speed up gut healing)  We haven't had any diarrhea yet, probably because of the BIOMOS.

But on Tuesday, following hospitalization, the antibiotics were taking their toll--she was getting weak. By the time the full course of antibiotics rolled around, she looked awful, but her vitals were still maintaining without Banamine, and she continued to drink and eat a little. We were very close to euthanizing, but I wanted to give her a couple of days to recover from the antibiotic regimen before making the decision.

I'm glad I did, because each day, she has grown stronger.  She had developed severe ascites, but since ending the antibiotics, her body is reabsorbing the fluid and she's peeing it out.  Today, she looks ALMOST back to normal.

The vet told us to give her whatever she wants to eat: grazing in the pasture, Rice Bran, Equine Senior (with beet pulp base), and hay.  She gets to choose what she wants and needs, and everyday it is something different.  Her eating is good.  Her drinking is excellent. Her will to live is strong.  Her temperature is normal.  Her heart rate is very close to normal.

Will adhesions take her down? Laminitis?

I don't know the answers yet.  Each decision I've made has hinged on the smallest glimpse of this or that hope measured against quality of life assessments.

Time will tell if this is another miracle.
Posted by Linda at 8:39 AM