A Return to Maine (Part One)

I'm back from Maine, and it was a whirlwind! My husband and I had so much fun exploring together.  I'll give you a brief tour--only highlighting the particularly interesting points of the trip and saving you the FULL tour!

It started in Massachusetts at The Wayside Inn in Sudbury. After a long flight--awake at 3:30 am PST and flying out at 5:30 PST--we drove to the Inn and had drinks & appetizers in the pub. (pictured below).  Bacon wrapped scallops and the oldest drink in the New Country--The Coow Woow.  After drinks, we went into their dining room where I had lobster pie and bread pudding for dessert. 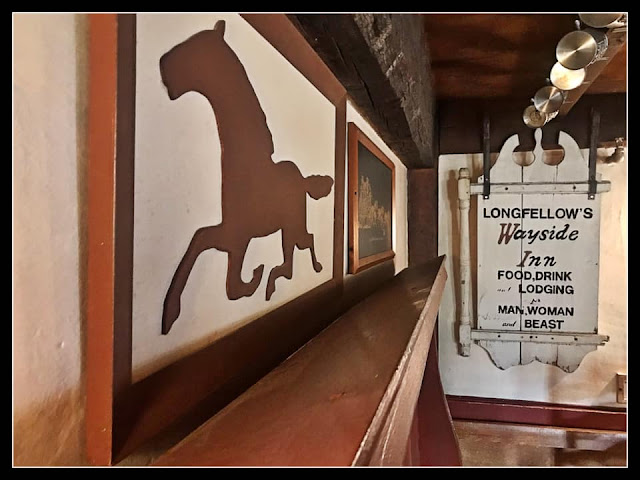 After dinner, we retired to our very old, rickety, authentic bedroom--where we opened up the shutters to let in fresh air--then fell asleep.  While we slept, a Cyclone Bomb moved in--a drastic drop in pressure--which brought wind and rain and blew the shutters against the side of the outside walls.  My husband, dazed and confused, thought they'd blown off, and had to feel around in the dark to find them and get them closed. 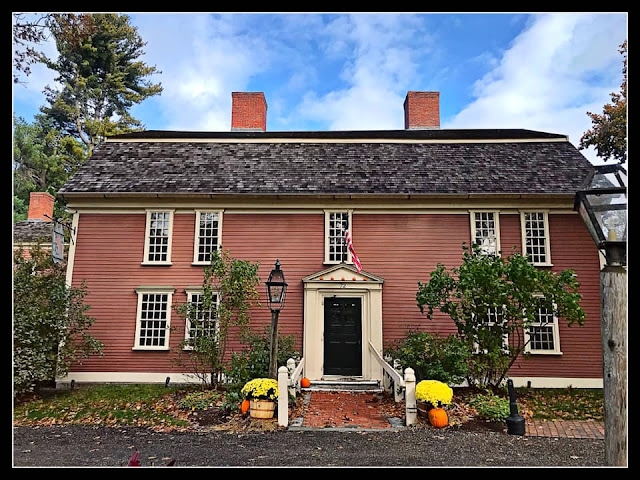 So, a very authentic N'or Easter experience in a very old, authentic room at the Wayside Inn.  Fun!

The  next day, we drove to Walden Pond, where we hiked around the pond to Thoreau's old cabin site.  That  has long been my dream, and it did not disappoint. 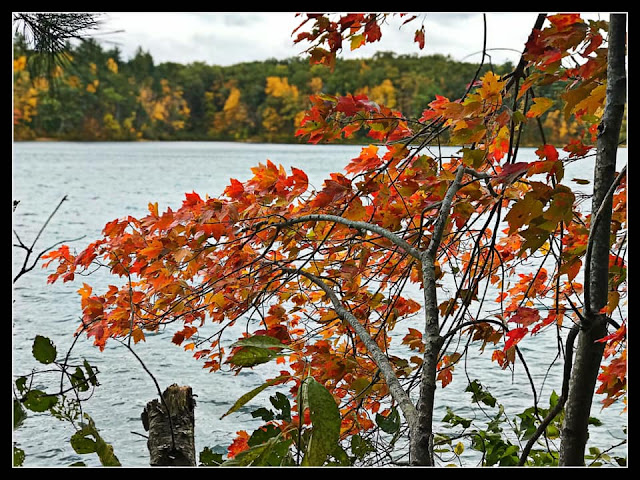 It just felt good to get out and walk.  It was about 2 miles total, if I remember correctly. (The pond, above, and the old cabin site, below.) 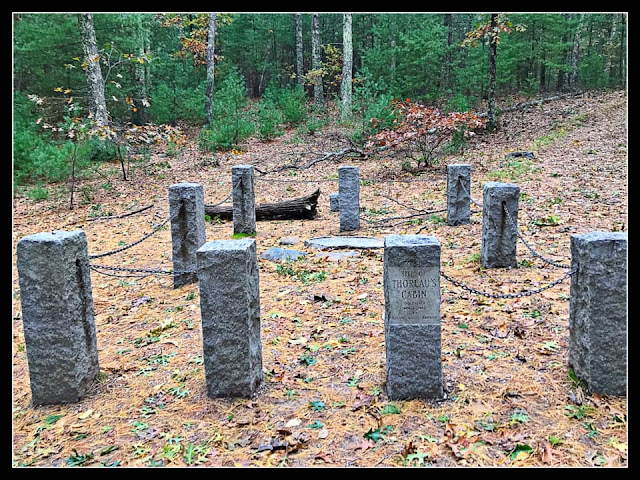 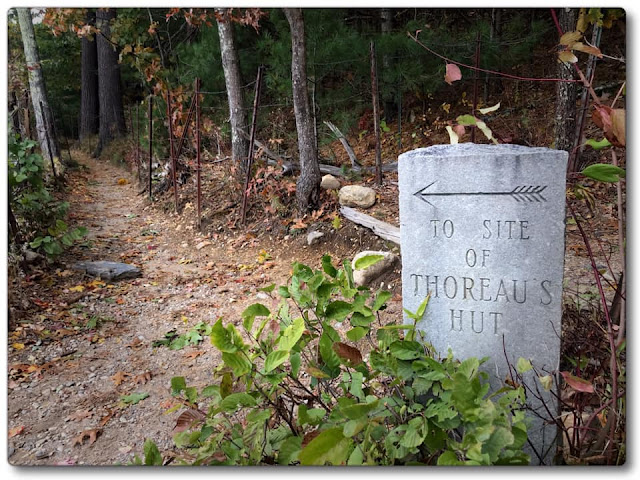 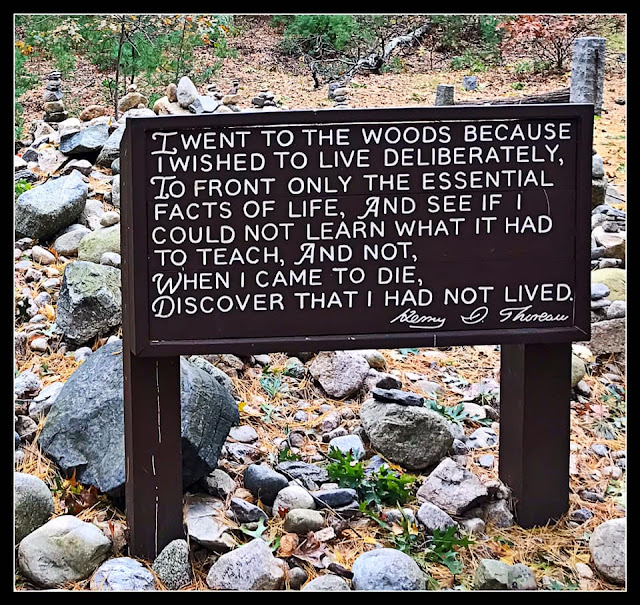 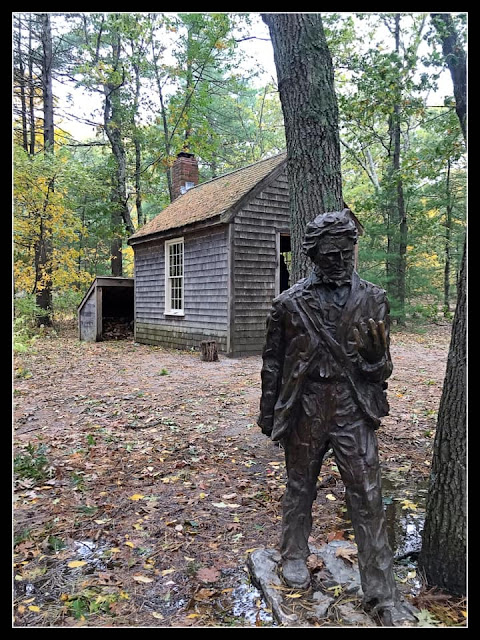 From there, we drove around the coast of Maine and meandered up to Belgrade Lakes where the play/movie On Golden Pond was based, but not filmed. 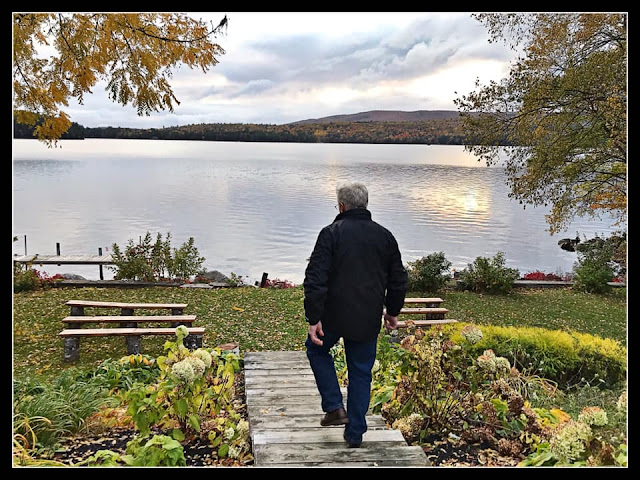 "Norman, the Loons, the loons, they're welcoming us back!" 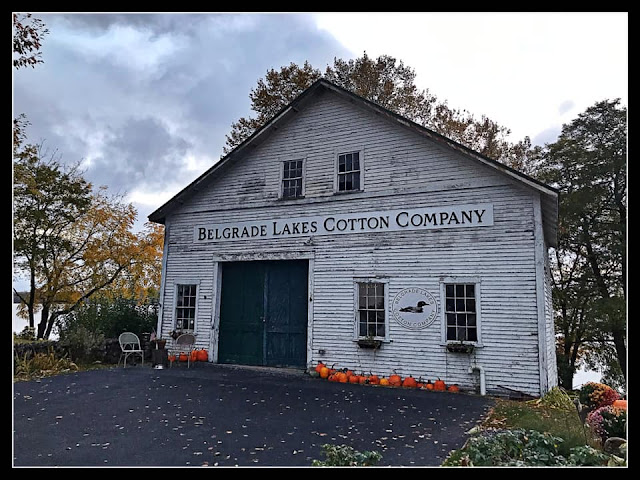 We had another wonderful dinner in Belgrade Lakes at The Village Inn and Tavern, where we also stayed.  Amazing dishes there.  And amazing cocktails. We had a large suite that night, and it felt like being home.

The next morning it was up early for the drive to Northern Maine, where I wanted to see my old school, the base (Loring AFB, closed in 1995), and the surrounding towns as you drive up the St. John River--Van Buren to Madawaska, New Sweden, Stockholm.)

It was a lot of driving, but we made it to Limestone. 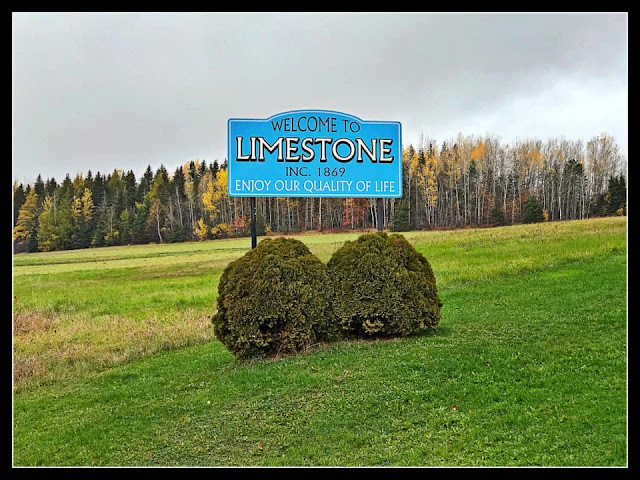 As we were coming into town, we saw buses filled with potato harvest kids.  That was a blast from the past because I used to be one of those kids in the 80's--picking potatoes in a basket, and loading baskets to a barrel, until it was filled, tagging it, and starting again.

I made fifty cents per BARREL.

Bringing in the harvest.  I read that they had stopped letting kids out to work the harvest, but because of the labor shortage, farmers requested they start up again, and the local councils voted this year to do that. The harvest is mostly mechanized now.

In the book, Travels With Charley, In Search of America, John Steinbeck drove to Northern Maine to be a part of the old-time harvest--the one I got to participate in.  He felt like it would be a thing of the past.  I think it survived longer than he assumed, as little farms could not afford to invest in big machines we called, "harvesters." Eventually, most of those little farms, run by large Catholic families, sold out to bigger ones.

So here I was, thirty six years later. I had finally arrived at the closest thing I had known to a hometown.

And so far, very little seemed to have changed...but there was much more to see. 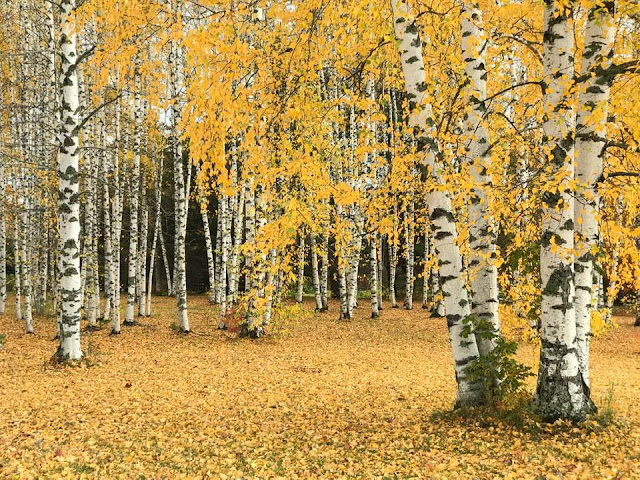