2,050 Miles, 6 States Later, We have a New Irish Wolfhound Puppy 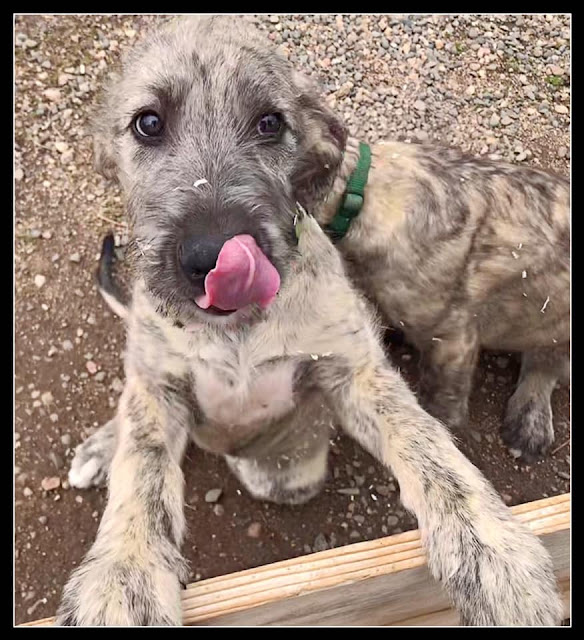 The time came for a new puppy; Riagan, our oldest Irish Wolfhound turned nine in March, and Loki, our five year old Wolfhound needed a younger companion, especially should Riagan pass in the near future.  For that reason, we had planned to do it earlier--a couple of years ago--but kept putting it off and putting it off. One reason was that I didn't want an IW puppy jumping on my old lab, Maggie, the love of our life.  But sadly, Maggie passed last August. And anyway, truth be told, puppies require a lot of care at first--and drastically change your lifestyle.

Last fall, around the time Tumbleweed got sick, I contacted Riagan's breeders at Laloba Ranch, to see if they had any upcoming litters.  They did.  But then Tumbleweed got sick and I put it on the back-burner.  Luckily for us, they did not put it on the back-burner, and had us down for a pup. We put down a deposit and waited for the birth--March 14th.  Our puppy, Piper, was one of three that were taken cesarean, and weren't breathing until the vet, and both owners, rubbed their little bodies to life.  Thus, they became the "MIRACLE PUPS". 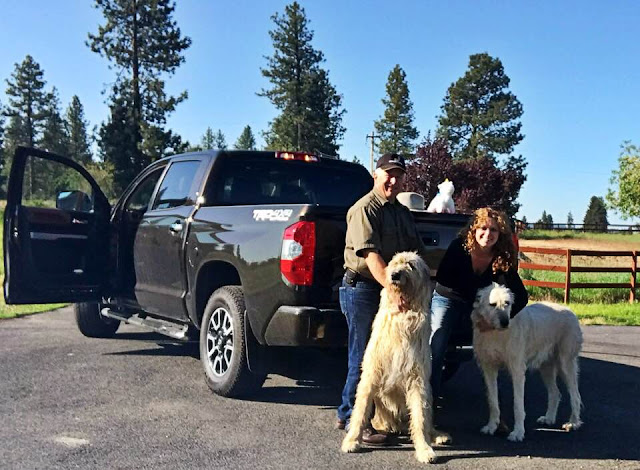 Eleven weeks later, after our Piper miracle pup was the first to open her eyes (five days earlier than the rest) and showed an aptitude for "singing"--a wolfhound thing--it was time to go get her.  (They do not fly pups.)

So, we said goodbye to our big dogs (Riagan didn't look very happy...even then.)  And we hit the road to Steam Boat Springs, Colorado--a thousand miles there, a thousand miles back, with puppy in tow. 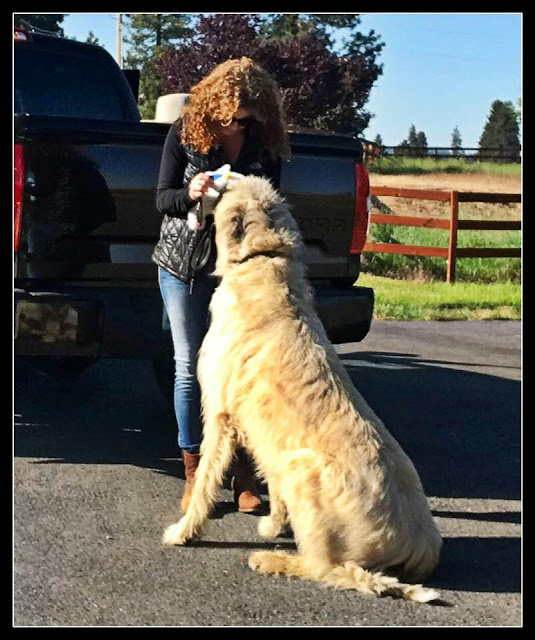 (Getting Loki's smell on a stuffed toy to bring Piper.)

Turns out, we weren't the ones who drove the furthest.  The Laloba Hounds are highly sought after for their longevity and temperament.  The "breeders," I almost hate to call them that-the human puppy parents--live with nine of their own hounds.  The hounds have free access to the inside of the home, all over it, and we joked with them that the people parents are actually the hound's pets!  That being said, the pups are showered with attention while growing up, and it makes for a wonderful start.  (They even think epigenetics figures into this--generational human/hound bonding passed on through the turning off and on of genes, and included the science on this theory in our notebook.)  The new owners were driving from New York, Florida, Georgia, further west of us in Washington, --pretty much everywhere.  When we arrived, a day after the release date--there were only two left, ours, and the Florida family.  All the rest of them beat us there.  (You don't pick your own puppy, the "breeders" do. They base it on the needs of  your particular home, and the personalities of the pups.  You are expected to send them a detailed account of your lifestyle and the personality of your other dogs, if you have any.)

We drove most of the way there on Tuesday and admired the beauty and wildlife throughout Montana, Idaho, and Wyoming, but finally stopped in Rock Springs, WY for the night.  At 23,000 people, it seemed like a METROPOLIS compared to the rest of Wyoming.  It was about 10:00 pm when we pulled into the hotel, but the next day, Wednesday, we only had to drive another four hours to get to the Laloba Ranch in Steamboat Springs.

What an exciting day!  Our pup was so happy to see us!  It was like she had been expecting us all along.  Her brother seemed to know we weren't his people, and was a bit more stand-offish. But Judith assured me, what was happening was normal--for some reason, every pup seemed to know their people and get excited when they saw them. (But I still pulled the little boy over to love on him, too.) 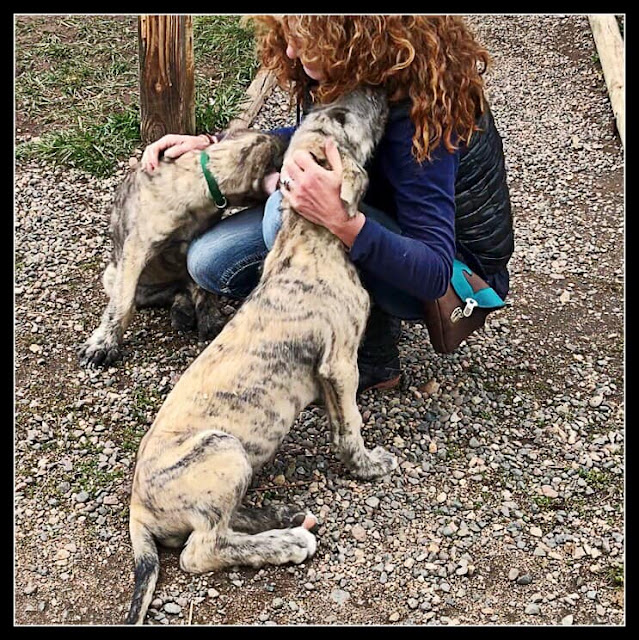 We had a two hour orientation about all the latest vet science on the wolfhounds, and were sent off with a binder of information.  I received a notebook with Riagan, too, but it had grown a bit bigger.  Oh, they also sent us off with note cards that had pictures of the ancestors of our pup. (Of course, we own one of her ancestors--Riagan--and she has been a compliment to their hounds. Someone even called the IW club to tell them how great Riagan was, and they, in turn, called the "breeder"--Laloba Hounds.  I still do not know who that was, but she was told it was someone who met Riagan.) 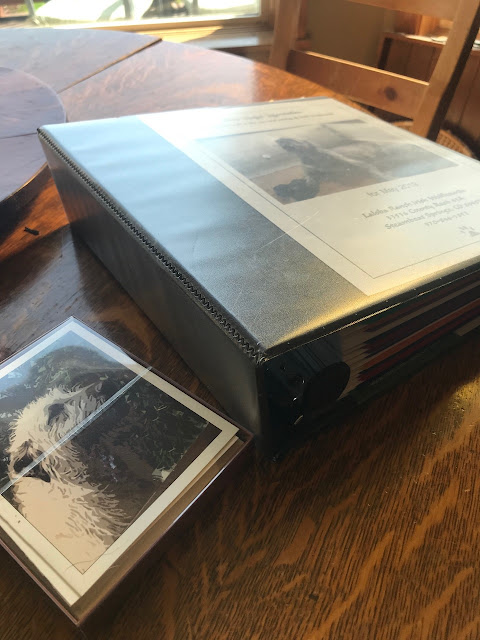 We couldn't take Piper that day because we were staying the night in Steamboat and had thought it best to pick her up early the next morning on the way out of town.  She was so sad to see us go!! 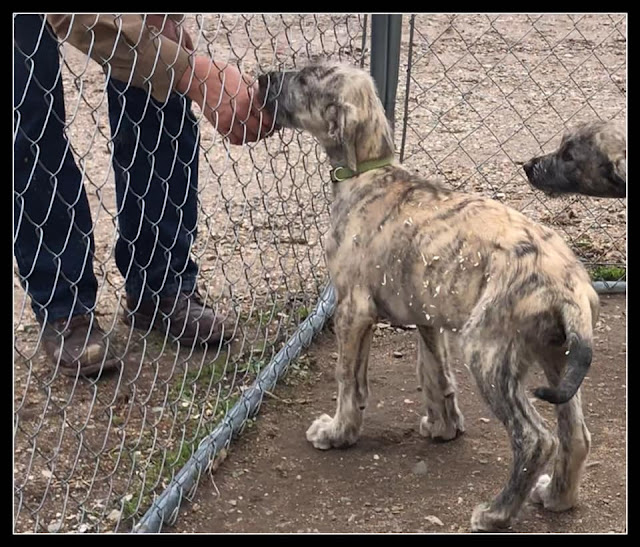 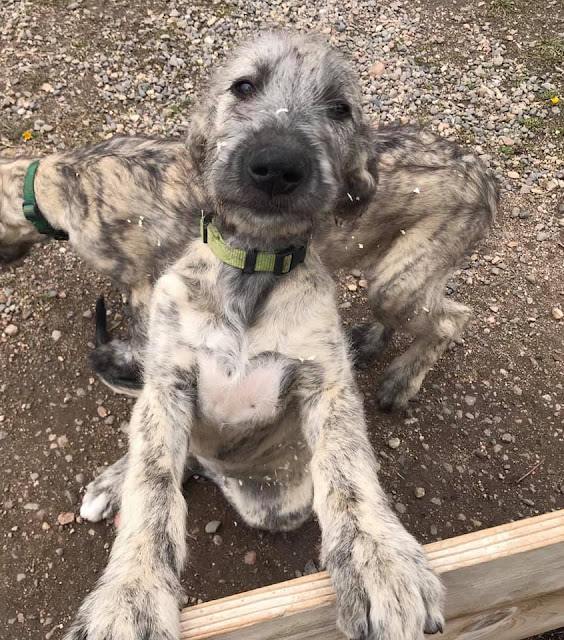 We couldn't wait to get back to her the next day!  (Although, we did have a wonderful dinner at the Cafe Diva next to our hotel/condo.)  They had been calling our pup Peeper (because she opened her eyes early), Piper (because she sang), and Cady/Cadence (because she had an original tune). 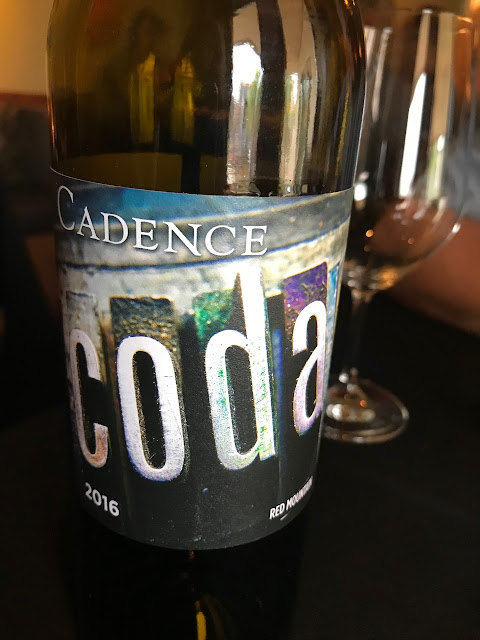 We celebrated with a "Cadence" wine in her honor.  (We are having a hard time settling on a name now.  I love "Piper", but I also love "Cady May--Cady from Cadence, and May, because we picked her up in May".  Unfortunately, though, Cady sounds like Katie--and I know a gazillion Katies.  Cady May is great, but everyone shortens it to just "Cady"--which gets me back to the problem--too many Katies.  So, we'll see what sticks.)

In total, we drove 2050 miles.  We tried to drive all the way home on Thursday, but called it quits in Missoula, MT around 10:30 pm.  We'd been on the road since 7:00 am--going from Colorado to Wyoming to Utah to Idaho to Montana, then Washington.  A total of six states in three days!

Piper slept, or rested, in my arms the entire way!!  She also slept with us in the hotel room, and didn't make a peep, or have an accident.  The puppy parent/"breeders" suggest that you co-sleep with the pups until they acclimate.  We did it with Riagan, and it worked out great, so we're also doing it with Piper.


(First night, Piper in bed looking at her stuffed lamb.) 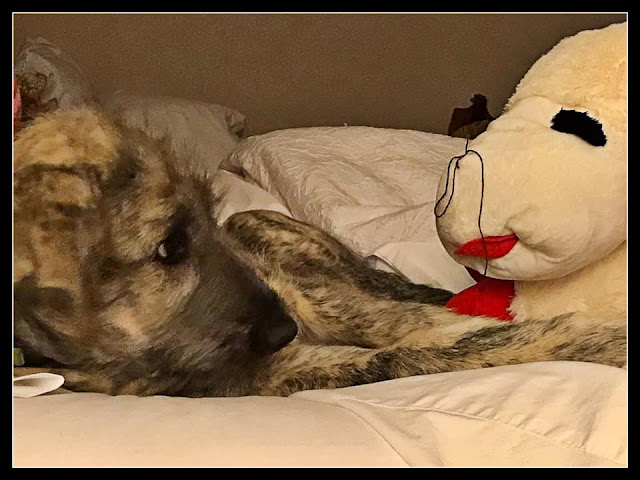 Outside the Hampton Inn at Missoula, MT--they even gave us puppy treats for Piper!  And, they had a little path in back of the hotel that goes down to a stream--which made for the perfect puppy walk. 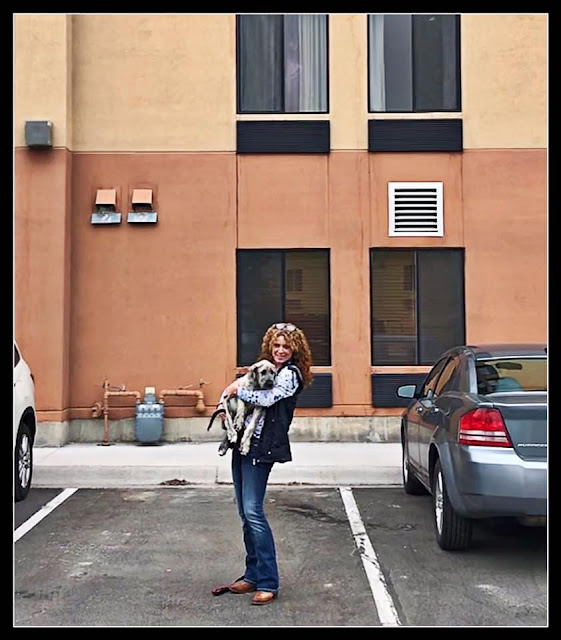 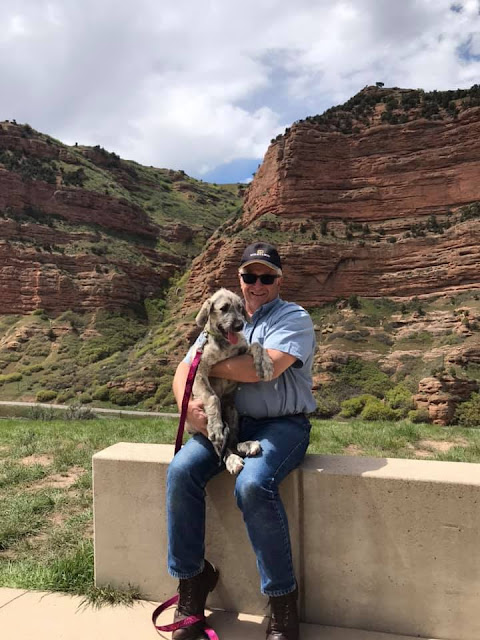 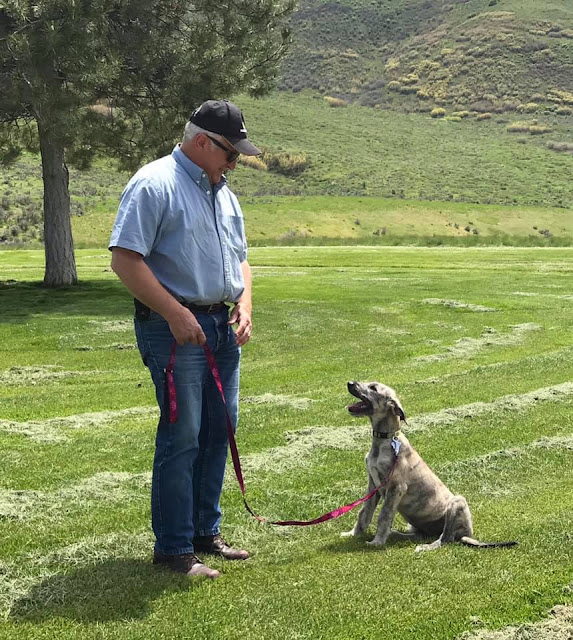 The day after we arrived home, we took her out on the pontoon boat to Lake Roosevelt.
She LOVED it. 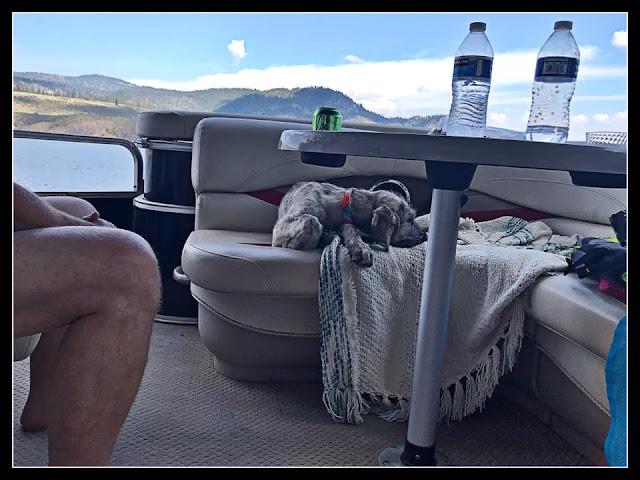 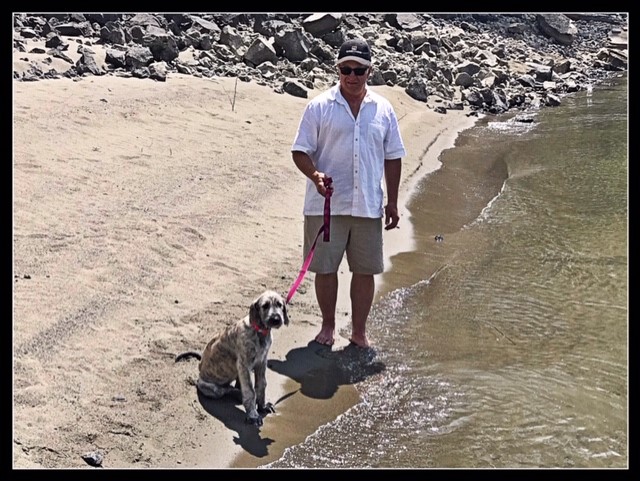 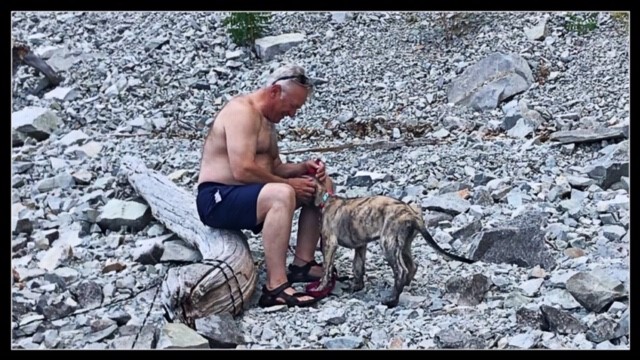 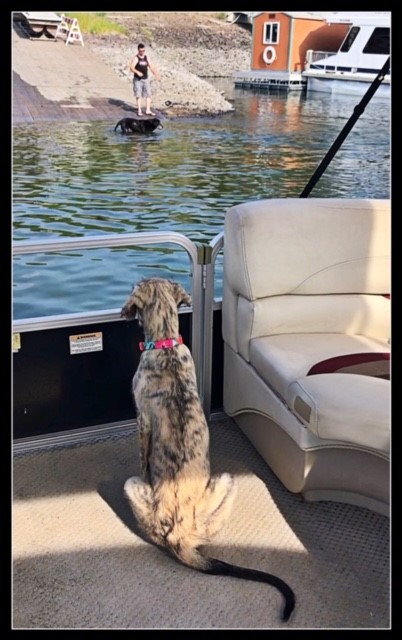 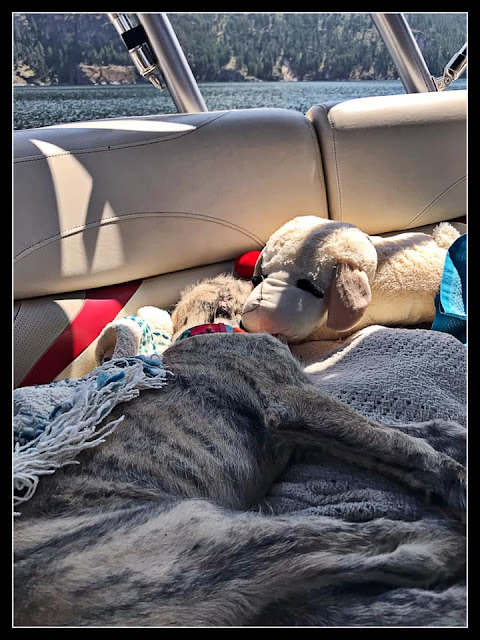 She's trying to bond with the big dogs, but they're a bit stressed with her.  This was a rare moment of peace.  For the first two days, they did nothing but drool and run away.  Now, they're starting to growl at her and set some boundaries.  I'll be glad when they fully accept her. 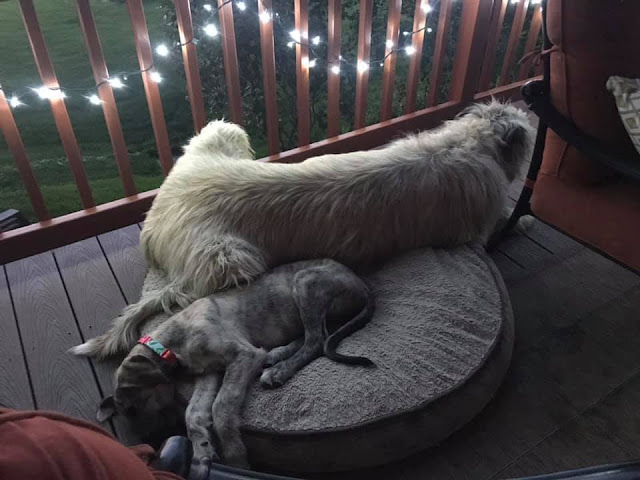 She was doing a lot of sleeping, but today she gave me a fat lip with her head trying to get off my lap.  I broke out the marrow bones, and she is now contentedly chewing away out on the deck while I write this post. 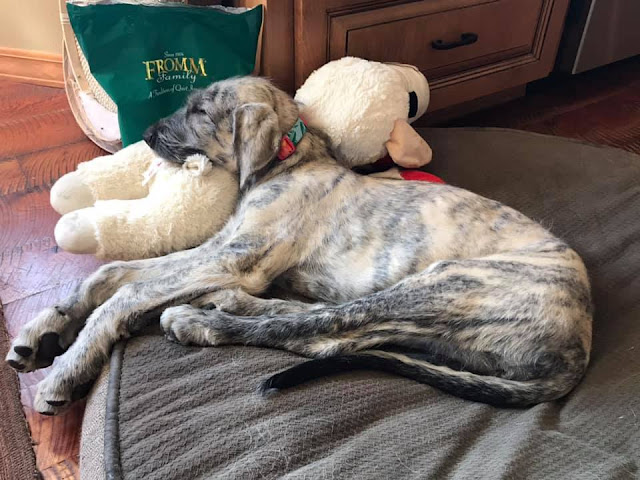 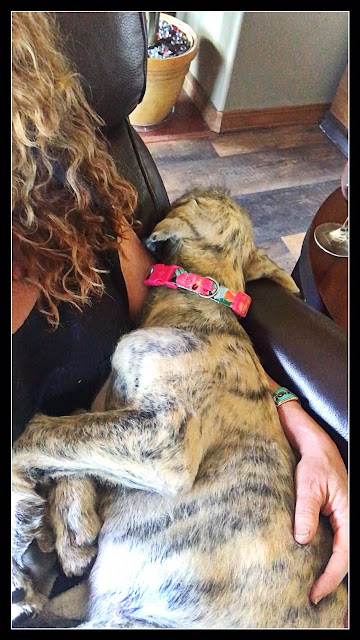 appear to be coming to an end. 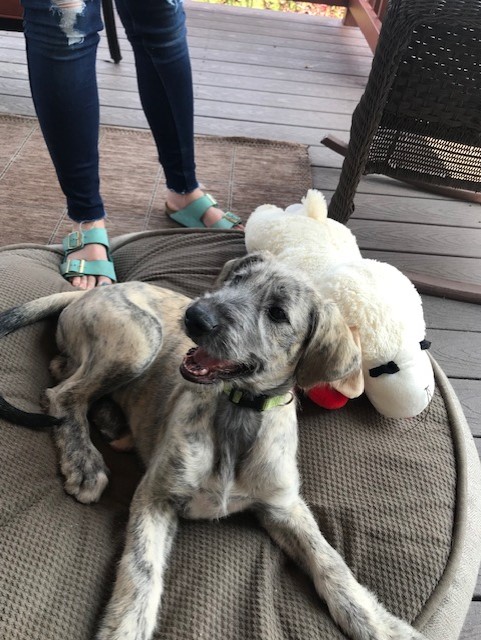