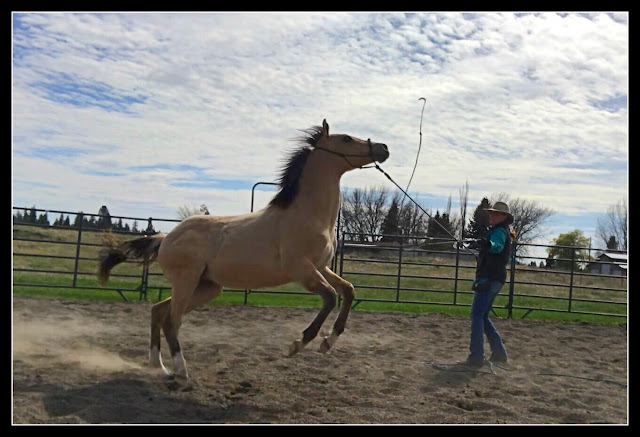 Rearing. My least favorite thing in horsey world, but I am learning quite a bit about it.  The photo above is actually not Tumbleweed rearing, although  he has done it a few times this week as we lead to pasture, and it is the reason why I spent yesterday working on moving his feet.  The picture above is actually me  having asked him for a "REVERSE," he kept going, I blocked his path with the whip, and he is looking like it's going to kill him, but really he's just being overly dramatic and pissed.

Having never had a stallion--because that is what I will now call him, rather than stud colt, which implies a baby, I didn't realize how important it is to stay a few steps ahead of him EVERY DAY.  He is feeling the love--of mares--spring--testosterone--and that is making him feel pretty tough, too.

But it's so completely solvable--easily.  And, I wanted to write this post to help others who might be in the same situation with a little stallion who is starting to rear.  It's not as scary as it looks--and it's easy to fix.

Rearing is them saying, "NO, I'm not going where you tell me.  And if  you insist, I may even strike you while I'm up here, because I have these two free hooves that are flailing around for balance anyway."  It can be accompanied by biting--another form of dominance.

I had been out of town last week, so Tumbleweed hadn't had his daily input of correction--and he reverted.  Now, when you're in a breezeway, these things are tough to correct, so I made sure to take  him straight to the arena yesterday and have a come to Jesus on who is boss.

What does that mean?

First, I made sure to carry an arm's length whip in my left hand.  I did this so that if he balked at all--which he has to do to rear--I could swat him on the behind and keep him moving forward.  I also wiggled it back there quite a bit just to keep his attention on moving forward.  To be honest, that alone could have solved the rearing issue.


He went from yanking my arm off, at first, to a very well behaved young gentleman.  We were able to do front and hind yields and bridge work.  I had his feet.  No biting.  No rearing.  No balking.  He was like a sweet baby again.  My plan is to do this every day before turnout.

Also, at this point, I don't allow him to come into my bubble unrequested.  He has stallion brain, so it's best to keep him at a distance and remind him he's a second-class citizen around here until otherwise posted.

Today, I went out to see what stuck--and it all stuck.  He did try to change a direction once, but was quickly brought around.  As soon as he showed me he was behaved, I took him out to pasture.  That cut our session from 20 minutes (yesterday) to 5 (today).  And that's about how it's going to go from now on.  I won't work him more than necessary, but I also won't work him less than necessary to stay safe and remind him he's not the boss around here.

As for the gelding, we're almost to fly season, so I have to make a decision about surgery.  I'm leaning toward just getting it done now, but his testicles haven't dropped.  I'm calling my vet again today.

Update: My vet is busy and can't call me back until tonight, but I did schedule an appointment for May 3rd to have Tumbleweed examined (sedated, palpated, ultrasound) and gelded if the testes are easy to get to.  Maybe by then they'll have come down and saved us a lot of work.
Posted by Linda at 9:26 AM