When it comes to training Tumbleweed, I have a few things going against me:

1. The turnouts are icy, thus, Tumbleweed only has his stall and run to let off steam.

2. He hasn't been gelded yet. (That's pretty minor, but with all the mares, some coming into heat, it is preoccupying him.)

3. He is a dominant little guy when it comes to herding other animals or people.  He chases the dogs, cats, Foxy--and  he would love to chase me.

Which all means there is a bit of a battle of the wills between us right now, who's going to put their feet where and when, and no place to safely work it out. (Also, not enough opportunity for him to work off extra energy or get some of these lessons from the herd. Highs of 51 degrees are predicted a week from Monday, which will be game-changer.) 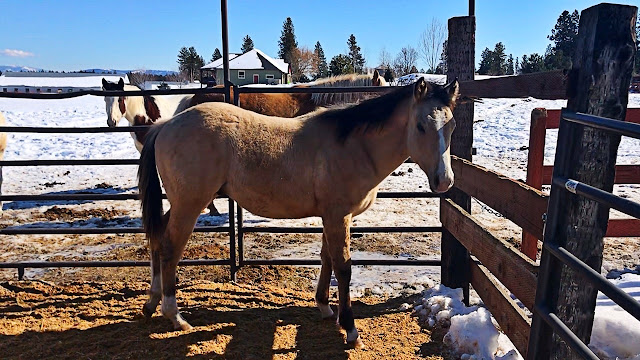 Yesterday, the farrier came out, and he did great for his trim.  He's also doing okay standing tied--he'll dance around a bit, but he gives to pressure, and is coming along nicely for longer and longer periods of time.  I love the Blocker Tie rings--I'm using it on level ONE with T'weed, and will soon advance him to level TWO.

So now that we have the good out of the way, let me tell you what he started doing.

A couple of days ago, as I was working with him in the breezeway--on leading--he reared up when I asked him to make a turn with hind end yield.  I just kept going, pulling him over to the side and down, and eventually he stopped, but he did it a few times.

The next day, no rearing.

Today, rearing started again, but when I asked him to back up.

I thought--okay, I'm missing something here, and I finished the leading lesson with him settling down and doing the backing, then I put him away, and began to research the issue.

Here's what I found:

1. Rearing while leading is not a big deal, and is quite common in young, fresh horses. (double check)

2. Rearing is a fear, or pressure, response.

3. Rearing is STOPPING. Not moving the feet.  Whatever you want to call it, but basically, stopping with two feet in the air.  It's a version of not going forward.

How do  you solve it?

Now, Tumbleweed isn't even a full yearling  yet--he won't be until May--so I am hesitant to do too much with him or put to much pressure on him--especially when we don't have a big area to move around.  However, I decided to take the pressure down a notch and work on the same concepts--backing up, moving forward, and front and hind yields--in his run--at liberty. 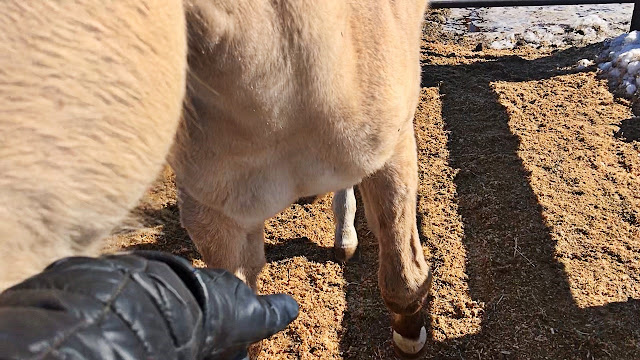 He did great at liberty except on his right side, front yield--which told me that I need to do a lot more on his right side--as Tom Dorrance suggested in his book, True Unity.  He basically said--do double to the right what you do to the left--and always start with the right just to make sure you get that side done, should you run short of time.

We worked and played, and he got petted, and moved around--he tried to stop at his water trough--I pushed him on--he got pissy--he moved some more--he ran into his stall to escape me--he peeked out to see if I was still there and came back for more--it was a great session and he didn't go up once.  And it was a good lesson for me, should it happen again--just relax and keep them moving.

I can't wait until the snow melts and we can really start working together again.  It's going to be such a fun and exciting spring!!
Posted by Linda at 3:59 PM