Every year
everything
I have ever learned
in my lifetime
leads back to this: the fires
and the black river of loss
whose other side
is salvation,
whose meaning
none of us will ever know.
To live in this world
you must be able
to do three things:
to love what is mortal;
to hold it
against your bones knowing
your own life depends on it;
and, when the time comes to let it go,
to let it go. 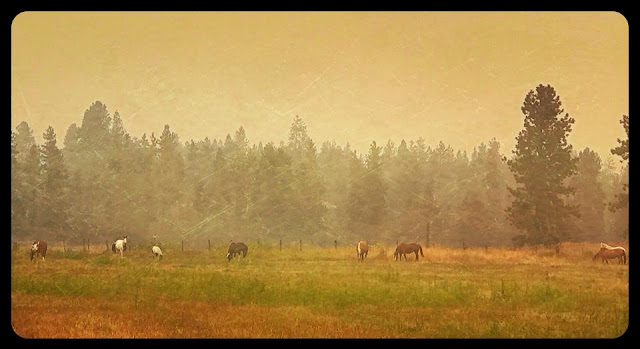 I'm getting better at letting things go.  Love hard while they're alive, because regret is the thing that makes letting go so much more difficult.

Yesterday, I put on my headphones and listened to Rainer Maria Rilke's letters about grief and loss, read by Roseanne Cash, The Dark Interval, as I worked around the barn---through smoke.

Smoke is like fog (except worse) in the way it blurs the edges of what we can see with what is in the far distance--so that whatever barriers exists between them, seem merged.  And, that is what I took from Rilke's letters.  Life and death are one, and we need to fully claim both or, at least, be cognizant that we inhabit both. 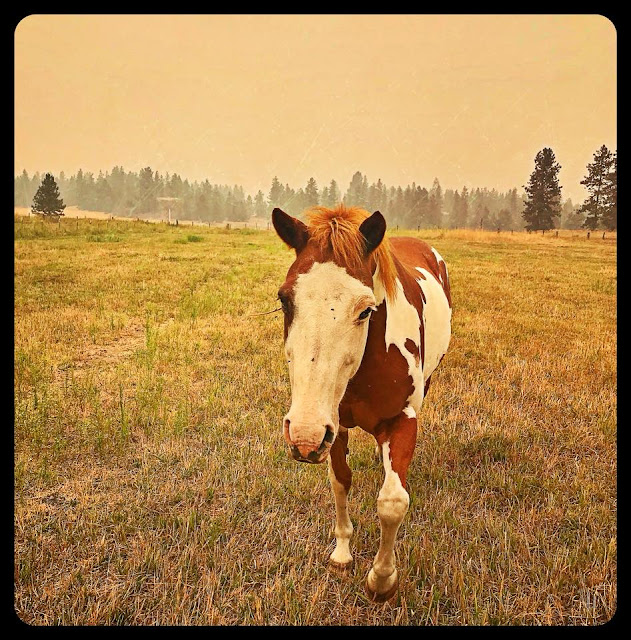 We have to be the masters of our lives--and our deaths--almost like the martyrs were theirs.  We should delve into our grief and see what it has to teach us about living.  Living fully. Remembering fully. Embracing it all. 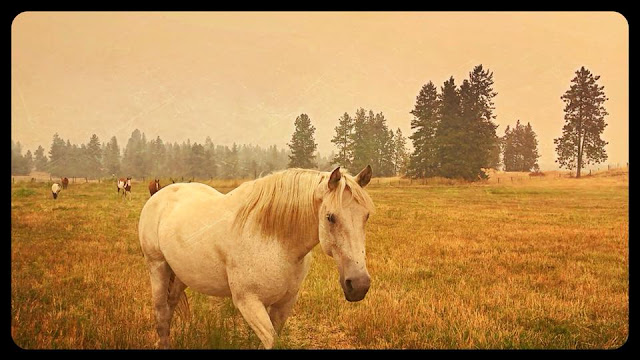 Which leads me to Beautiful Girl.  I'm not done with her yet, for a couple reasons.  One, she loves Liberty work, and charges toward me in pasture every day to do some.  She gets it.  She gets the  hand gestures, the treat position, all of it.  And she loves it.  Two, I've found a woman who trains horses in a very gentle way, and she's right next door.  I've been conversing with  her and told her everything about BG, and she is going to come over to meet her.  I'm taking it one day at a time, but there is hope.  I'm also going to have her teeth floated.  I'm wondering if there wasn't something wrong in her mouth that day she bucked me off.  I've often floated teeth when things aren't going well and, as of yet, it has never helped.  But yesterday, I saw a string of drool from Bee's mouth, which made me highly suspect something going on in there.  We shall see. 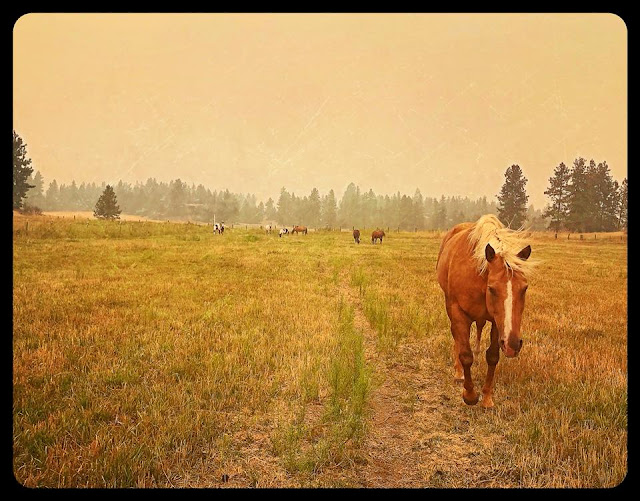 I couldn't fall asleep the other night, so I laid in bed and looked at Instagram.  There were all these pictures of really beautiful pieces of people's lives.  It was inspiring. Yesterday, we had all this smoke, which we still have today, and I remembered those pictures.  So, I started snapping shots--trying to capture something beautiful out of something so tragic. 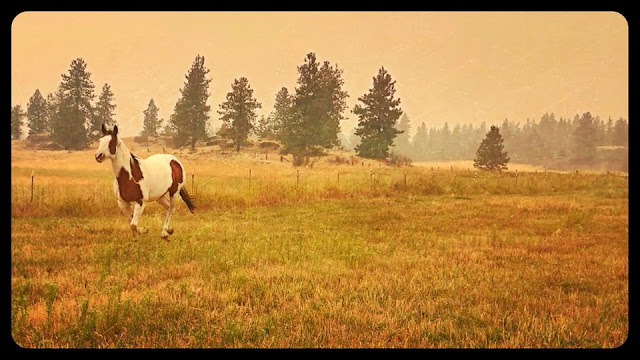 Yes, the fires we are experiencing are tragic. Yes.  Yes.  Yes. 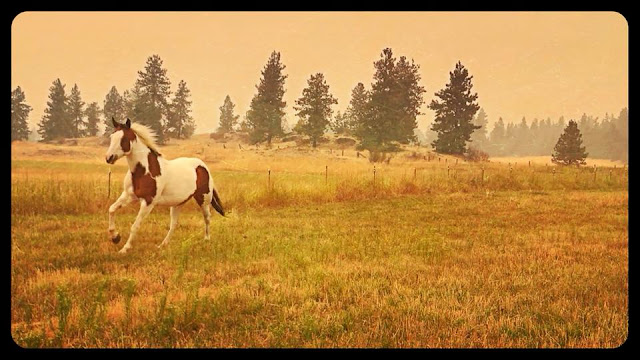 I grew up in the Northwest, during the era when this area was built on lumber and logging.  And, we didn't have fires like this. We always had hot, dry Augusts with no rain, and we always had fires here and there--but not like this.

This is all to say, it's time to find a happy medium between the clear-cutting of old, and the wise and judicious forest husbandry needed today.

We have overcrowded and diseased trees in our forests, and it's time to manage them better.  In my local park, we have the same problem, but no money to do the work ourselves.  I'm curious why we just don't mark the trees that need removal, then let the city's residents have a day or two to come into the park and cut down the trees--no charge--for firewood.  Instead, we leave them alone, and it's a tinder box.  We've had fire after fire in that little park.  What good does it do anyone when whole stands of trees are wiped out? 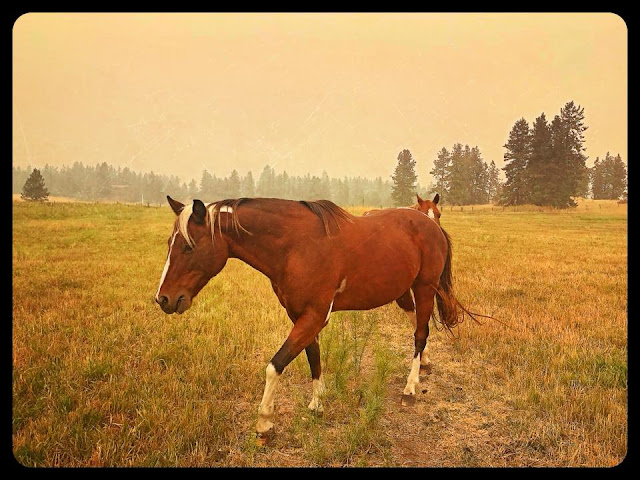 This is definitely a western problem.  The smoke you see in this picture is coming from the many fires in Washington state, California, and Canada.  We'll never be able to stop all the fires, but we can stop some faster, with better management. 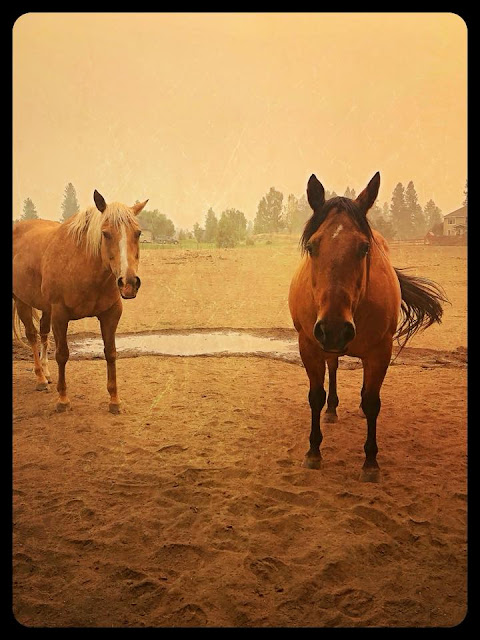 Today's air quality index is 399--HAZARDOUS.  It's not good for horse OR human.  Think of all the carbon dioxide in this smokey smog.  It's worse than a city full of gas-guzzling cars and trucks, with no emissions systems.  And it's not going away anytime soon. 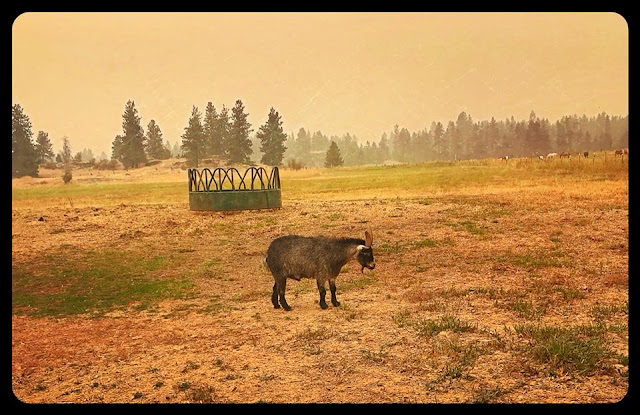 It breaks my heart.

In the West of today, we can all just put a big, fat X through August and invest in gas masks.  The outside animals, however, have to suffer. 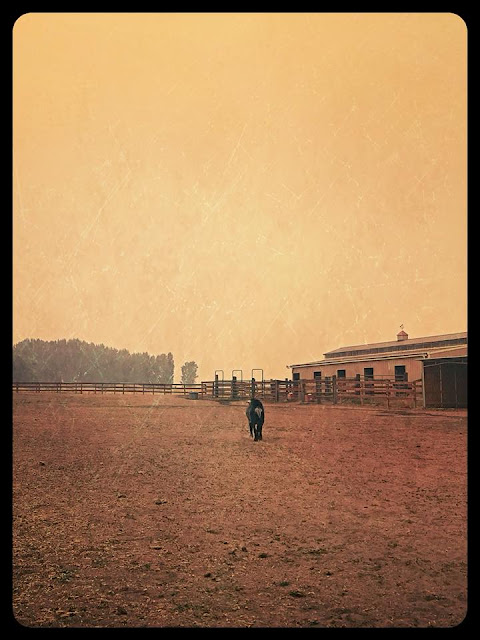