Opening and Closing a Gate and Possible New Saddle

The new obstacles are really coming in handy.  For example, the mailbox--I showed Bee how to open it one time, and she immediately wanted to do it herself.  I love her curiosity.

Leah lacks that for some reason, but I did use the mailbox to work on getting her to side-pass to objects--in preparation for the gate work. She was, of course, resistant, but eventually she got me close enough to open and close it a few times.

And then it was time for the new gate obstacle.

For the record, Leah is great at letting me open gates.  It's the closing where she loses her mind.  The day she fell down--about 1 1/2 years ago, we had opened the gate and walked out of the arena toward the barn.  Then, I asked her to turn around and walk back into the arena and close the gate.  She would have NONE of it and she tried to bolt away, but I held her, she braced and started to fall, I bailed off and hit the ground, she recovered herself and stood in the gate opening looking (I thought) devastated. In retrospect, I'm not so sure.  But she did stand there and let me get back on.

Anyway, I wanted the new gate to open to the pasture so that we could removed the variable of the barn.  She will always want to go back to the barn to eat, and that is a fight I don't need to introduce right now.

We worked on closing the gate for about 30 minutes before we got success.  I had to drop it many, many times when she would side-pass away or go too far forward or backward.  I could feel her heart really beating, too, like she was stressed.  So, I would ride her away, and then come back, hoping it would deescalate it.

In the end, the thing that brought us success was staying put at the gate, asking for one step at a time, and letting her rest until I could feel her heart rate return to normal, before asking her to take another step. It was meticulous work that took every ounce of patience I could muster.  And, there were moments I thought it was a big waste and at the end she'd just bolt anyway.

But she didn't.  She took that gate, step by step, to its closing position and allowed me to latch it.

That's all you wanted???

I decided to dismount there and give her rest as her reward.  I jumped to the ground and grabbed her face and kissed her and kissed her.  Then I took her picture to commemorate the moment. 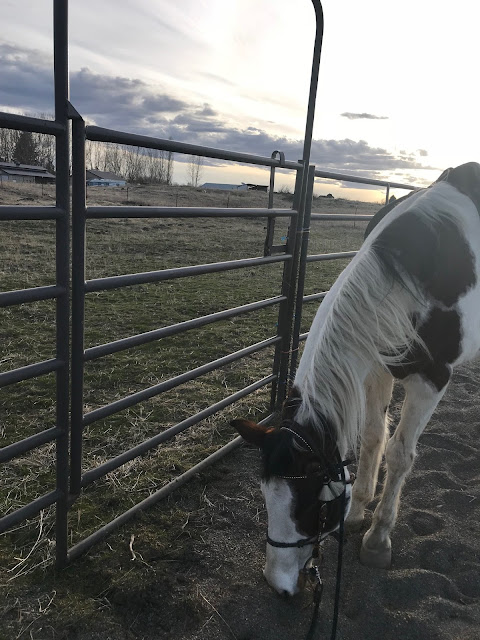 I need suggestions.  Leah has lost a lot of weight, which is a good thing, it's what we've been working on, but I would like to give her a supplement that she can enjoy eating and won't cause her to get fat.  I give my elder geldings equine senior every morning and night, and I would like to give her something substantive, too.  Right now I give her a small scoop of Farrier's Formula.

Also, I'm trying to get away from my heavy saddle--not completely away--but when I'm riding three horses a day, I need a lighter saddle to move between horses, but one that has all the safety features of a real saddle.  I've been going through all of mine and here is what I've found:

2. My endurance saddle with english leathers and stirrups is very comfortable, but not as easy to bail off fast or get back on without a mounting block.  I can certainly do it, but it's not nearly as easy as the western.  The stirrups want to get stuck on my boots.

3. The horses love the feel of the english style girth on my endurance saddle.  The elastic isn't as confining.

4. I'm trying out an endurance saddle with western style fenders, but the seat feels flat and I'm having a hard time getting used to it. Is that common?

5. I've only tried the new saddle on Cowboy, so far, but he seemed to really like.  The rigging is different and sets the cinch back more than on western saddles, but he seems to like that placement.

Any thoughts on endurance saddles?

Here it is. It's an RR Gulley, handmade saddle.  This wouldn't replace my western saddle, but it would give me a lighter option to use at home when I'm switching between horses.  Thoughts?  I'm going to ride in it again this morning and see if I can get used to the seat. 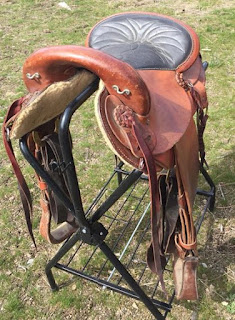 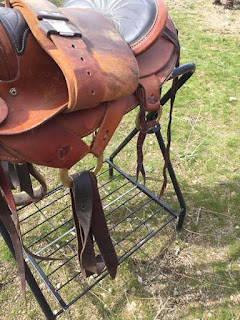 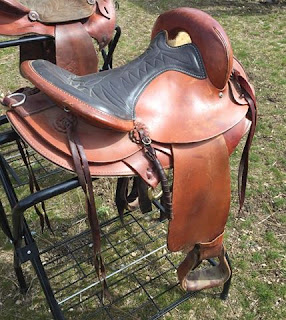 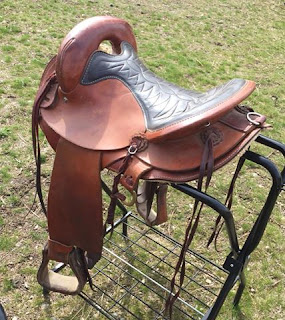