My last post was about what to do when the rider is scared, but if we had horses that were never scared of anything, we probably wouldn’t be either. Our fear really comes from not knowing what our horses will do and if we can handle their fear responses and keep both ourselves, and our horses, safe.

Shirley shared a post for Radek Libal a few weeks ago and, since then, I’ve been following him on Facebook.  It was no little bit of serendipity that he just released a video addressing the topic of fear in our horses and how to handle it.

The horse he’s riding does exactly what Leah does when she gets to a scary situation. That whole blowing out to the right or left. For her, it’s almost always the Left. I loved watching his video. He is so good at explaining things and making them simple.  The last portion of the video is an ad for signing up with him. I think the cost was ninety something dollars for a  lifetime membership.  I just might do it because I LOVE his content. 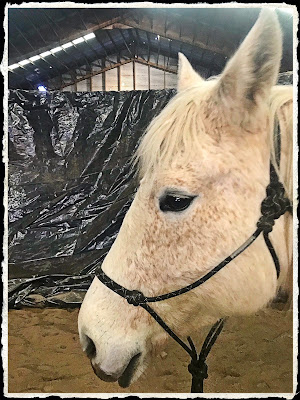 (You can see Bee has one ear on the tunnel and a scared eye.)

I took B over to the barn next-door before they tore down the tarp tunnel. Turns out, Bee is actually braver than Leah with this particular obstacle--which doesn't surprise me since she allows me to completely cover her head with the tarp at home, whereas, Leah isn't okay with that yet.

We walked through the tunnel together, several times, from both directions.  She was able to listen to me in the tunnel when I'd put my hand up to ask her to slow down.  I am not riding Bee at this point, so we didn't do that. The ground is still too frozen and snowy and slick and I don’t want to take a risk on her.  When spring hits, we’ll start back in saddle and do a lot of work trailering her down to the equestrian areas and trail course obstacles. 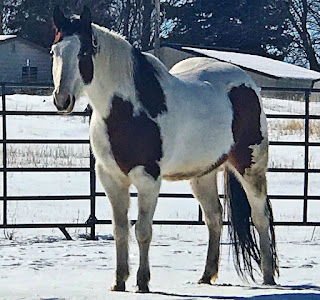 I continue to work with the horses in the outdoor arena as long as they have decent footing. My work is mostly consisting of getting Leah to be calm. I do a lot of taking her from barrel to barrel and picking up a cone and then back to the next barrel to deposit it. Little things like that bother her. But with work they shouldn’t. She is doing much better at stopping and then going over obstacles. 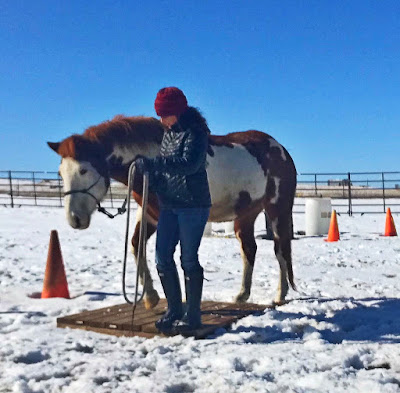 The video by Radek Libal really sums up what we worked on at the last clinic: keeping them faced up as you work through the fear. It’s not about putting their nose on it, (although if they do become curious about it and they are thinking about it, they may decide to put their nose on it), instead, it’s about facing the fear and slowly getting closer and closer without running away. 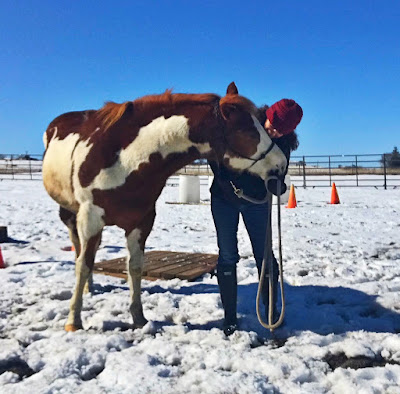 A few extra thoughts about working them through fear:


1. Only ride with people who will be patient as you work through the fear.  It might take a while, so they should be prepared to sit back and relax.

2. Listen to your horse and his fears and don't just disregard them all as unfounded.  Last week, I asked Cowboy to step on the bridge above with me in saddle, and he wouldn't do it.  I dismounted and had him put a foot on it and he slipped.  He was right.  I praised him.  When the bridge was dry (above) we did it all again and Cowboy went over with NO PROBLEM.  It was always about the slippery bridge--not the bridge itself.  On the other hand, there are some things that are scary, but still very safe and we're going to override their suggestions.  We need to have a way of communicating with them that says--I hear you.  I have thought about your warnings.  But I say it's okay.  Or, And I say you're right, we're not going to do this.

3. In the video, Radek is in an open, flat field, but sometimes we get to places on the trail where there isn't a good spot to safely work them through the fear.  I like to scout out rides and really ask people about them ahead of time so we'll know what we're facing.

4.  There's nothing like a trail ride to test every bit of the work you do beforehand and, sometimes, you just get into a real mess--but still, the little things can make big differences.

There was a ride a couple of years ago where I let my friend--an old Cowboy who passed away last fall--lead us up a narrow trail near his house.  His horses had done it a thousand times, and I trusted him.  The trail was steep and overgrown in parts, but rideable.  Unfortunately, Cowboy's bit broke leaving me with nothing but his headstall.  At the same time I realized his bit was broken, I saw a log coming up in the path.  I quietly dismounted and got in front of Cowboy because the trail was too narrow for both of us.  Dismounting wasn't normal, so he started to get scared.  When we got to the log, he evaded going over it by going to the side and then almost falling down the side of the mountain.  He had to really dig in and pull himself back up--which thrust him forcefully onto the path.  He was paying attention to where I was, and he didn't jump ON me.  The log didn't seem nearly as scary as what he'd just been through, so he walked right over it and we were able to navigate the rest with just the reins and headstall--broken bit hanging down on both sides.  All of this, and we were sandwiched between four other horses on that narrow, steep path.

A couple takeaways from this.  First, I was smart to get off before we got to the log. What if he'd done that with me on him?  Would he have been able to correct?  Would I have thrown him off balance?  Second, Cowboy respected my space even when I didn't have any real control of him, and that was something we worked on a lot before we ever hit the trail. It paid off.

But on the flip side--I should have been working on dismounting before that happened.  I should have practiced dismounting on trail rides when things weren't scary and then maybe he wouldn't have gotten so worked up.  And, it goes without saying, I should have paid more attention to my tack!  But things do happen, even with the best intentions.  I've had a rein snap on me before--and it was a  new leather rein.  I've heard of people losing their saddle rigging.  Things happen.

And another lesson learned, my friend was nearing the end of his days (he died of cancer last fall) and he didn't have any real fear for himself anymore.  He kept suggesting the most dangerous routes on that ride.  It was in a park I'd ridden a thousand times, but the places he was leading us to were the most treacherous--railroad tunnel so low we had to duck through it on our horses--and this steep path.  He suggested another path, but I overrode him.  The lesson from that is, when your guide is demonstrating a lack of regard for safety, stop following the guide!

But at least you'll be alive! 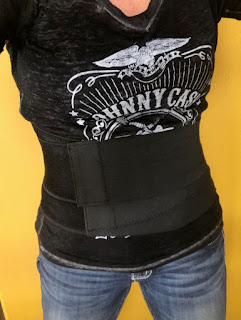 My back is getting better every day. I purchased a back brace and wore it for a couple of days and that seemed to really help. For anyone else going through this I would suggest getting a back brace at the very start--apply heat and take Motrin for the inflammation.

I have lots of plans for this property as we get ready for a foal baby.  Fingers Crossed!  One is to combine two stalls into the barn into one big foaling stall with a video camera.  Since we'll have lost stalls, I want to build a 36' loafing shed to make up for it.  Honestly, I like loafing sheds better than barn stalls.  The horses seem to prefer them, too. 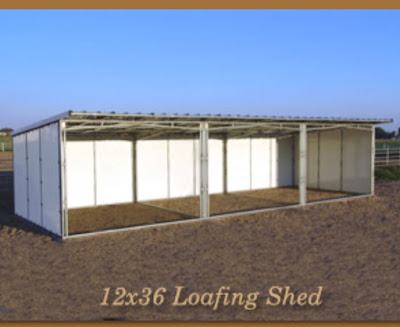 Well, time to stop blogging and get out with my horses.  I feel very lucky to have them.  They inspire me to get out in snow, wind, rain and ice.  I LOVE to see my herd!! 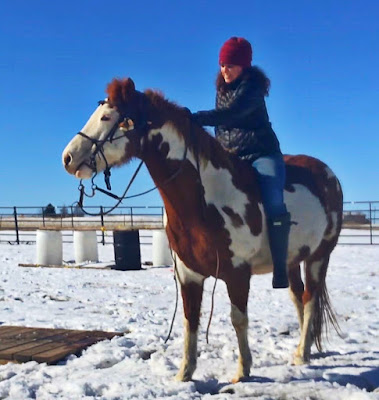