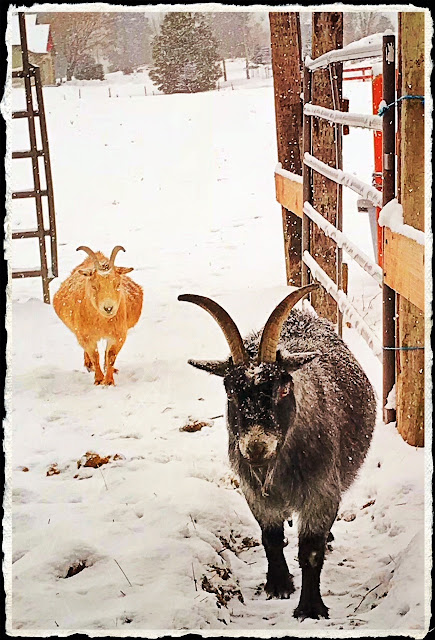 After riding Cowboy the other day, my tailbone injury was aggravated and sore, so the last few training days have all been on groundwork—driving, leading, and At Liberty heeding.

During my walk with Bee, yesterday, we saw what looked like an animal lying in the snow at the end of our property. As we walked closer, it looked the color and size of a deer, a small fawn, and I started to think maybe a coyote had gotten one. But as we drew closer, I could see the details, and it was not a deer—it was our goat, Irish.

There was no sign that she’d been attacked by an animal, she just lay there—frozen.  I examined and felt her body, then Bee stood over her, bending down and touching her all over with her nose. Tenderly. Bee lifted her head and touched her nose to my hands, where they'd run over Irish. When I went to walk away, Bee wouldn’t follow, even though she is usually happy to walk back toward home. She wanted to stand with Irish.

Irish was one of three goats we raised together, and she was 12 years old. She was a few months older than Scotty and his sweet little sister English.  She was an older baby when we purchased her, and she didn't trust people.  The farm where we purchased her was a 2.5 hour drive from our home, and when we arrived there we were shocked to find that it was filthy and the animals were housed in poor conditions.  Irish hadn't been handled and it was difficult to even catch her.  As we took her away from her mom, she was mawing loudly back for her.  A few weeks later, we purchased English and Scotty, and because they were smaller, Irish would bully them.  We separated them until they got bigger, at which point,  Scotty put her in her place and she became docile.  He took care and guarded over her just like he did his sweet sister.

I don’t know how she ended up at the edge of our property. Did she follow horses there? Was she delirious and wandered there? After all, she had been laying around more and really showing signs of her age.

I don’t know how she wandered off and died at the edge of our property. But now, the goat that I got, Scotty, is the only goat we have.

Information about pygmy goats.  The average pygmy goat lives from 8 to 10 years old.  The longest living pygmy goat, according to the Guinness Book of World Records, is 22 years old.
Posted by Linda at 9:50 AM