Last night, I came home and watched, Wild Horse, Wild Ride. It's a  documentary about the 100 day Extreme Mustang Makeover competition. The contestants are given a horse, they do not get to choose which one they will take. When they go home, they have 100 days to train the horse (usually mare or gelding 4-7 years old) for the competition in Texas (there's also one in Kentucky). Some of the competitors in this competition were professional trainers, but most were amateurs and even people who had never trained horses before, like Melissa Kanzelberger, the PhD level Biomedical Engineer.

After the competition, they have to give their horse up for the auction. They can bid on their own horse, but sometimes the bidding gets quite high and they can’t compete. There was one horse, Compadre, that fetched $9,000, and its owner, Jesus Jauregui, my favorite trainer in the movie (click on his link to find out more about him and his Vaquero style of training), only had 1 to 2K to spend. (T Boone and Madeleine Pickens purchased Compadre and donated him to a university as a mascot.) I'm sure all of the horses end up going on and having great lives, but it is very sad to see the trainers separate from them.

I wondered where all the contestants are now, and I thought you may wonder the same thing. I have updates on them all at the end of this post.

--What they accomplished in 100 days was just miraculous. I’ve had a Mustang and it seems like it has taken me 100 years to get her trained.  (No fault of hers).

--The key to training is hard work, courage and trust. There was one Navajo contestant, Charles Chee, who bonded with his horse. He kept saying his horse was "one person horse," and I always find myself saying the same thing about Beautiful Girl, so I thought it was funny. His son, also a trainer in the competition, remarked that “his (Charles the dad) horse trusts him, now he’s got to trust his horse.”  The elder Chee was afraid to take the training to the final step of actually riding his horse. In fact, he didn't get on his horse until a week before the competition.  The competition itself was his sixth ride! That reminded me of mine and Bee’s journey. I got her saddle trained lickity-split, but I couldn’t muster the courage to do those First rides until now.

--The winning trainers were the ones who constantly pushed themselves out of their comfort zone. My personal opinion, if you’re not competing, I don’t think it matters what time table you’re on.  But the best in the documentary were really having fun with, and trusting, their horses. They were swimming with them, running through trees and fields, blindfolding them and going down steep embankments, placing them under tarps while still being on their backs, then riding out the ensuing tarp escape, standing on their backs, riding them backwards, swinging ropes from their backs, chasing cows...you name it, they were doing it.  No matter how seasoned you are, all of that still takes courage and trust and the Mustangs seemed to respect that and thrive on it.

--Lastly, time does matter. They had 100 days and every day was vital and built toward the eventual trust and courage they would need. It was great inspiration for Bee and me in 2018.

The movie has been out for a while, and this was the second time I’d seen it, but it’s available free if you have Amazon Prime.

I have a colt starting clinic on the 30th of this month and it will be my launching pad for 2018. I want to develop courage, trust, and overall expectations in Beautiful Girl.  I’ll have to give up more control and be willing to fall. I’ll have to be willing to take chances and push out of my comfort zone. I'll keep the image of Charles Chee and the words of his son, Carlos Chee, in my mind,

"Your horse trusts you, now it's time for you to trust your horse."

Updates on the Contestants: 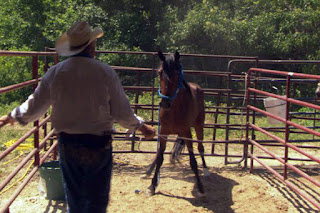 George & Evelyn Gregory: George had finally found his heart-wife, Evelyn, on his 7th try. In his 70's, he also found his heart horse at the Mustang Makeover.  Though they didn't get along at all, at first, George ended up falling in love with his Mustang and eventually bidding on, winning, and taking home, his horse.  As the movie ended, they updated us on George and said that after the competition he found out he had cancer, but was in remission.  Unfortunately, George passed away on May 26, 2012, a year after the film was released.  Evelyn wanted to keep her horse, but could not.  I tried to find information on where Evelyn is now, but came up short.  If you happen to stop by this post and have information, please leave it in the comments. 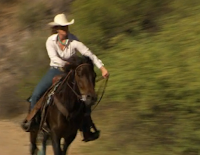 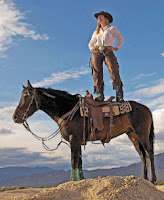 Wylene Wilson was the most colorful and flambuoyant of the trainers, and (SPOILER ALERT) she was also the winner.  She was a single mother of two kids in the documentary, but she is now a married mother of three.  She continues to train and compete.  She's a three time winner of the Supreme Extreme Mustang Makeover and was in Mustang Millionaire, which I haven't seen yet, but I'm going to watch very soon.  You can actually subscribe to Wylene's training tips via Facebook.  Check it all out on her webpage.  She does live up to the name Extreme Wylene.  The lady has courage and you can tell the horses thrive in her training program. 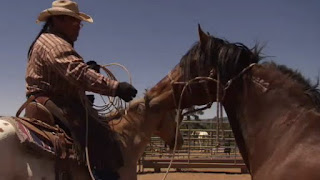 Charles and Carlos Chee: I wrote about them under "my thoughts".  All I could find as an update was an article from 2012 Navajo Times and a link to Chee's Horse Training.  If anyone has an update for us, please leave it in the comments section. I should note, Charles Chee ended up bidding on and winning his own horse.  I would love to know how that is going. 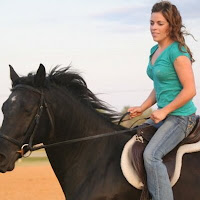 Melissa Kanzelberger PhD Biomedical Engineering: Melissa is now married and has several horses.  I found a website for Melissa that lists all of her horses, including her Mustang, Zero.  I also found her on Facebook.  It looks like she's really into endurance riding nowadays!  I thoroughly enjoyed watching her try to tame and train Zero (who she bid on and won during the auction).  She always kept getting back in the saddle, and she would not give up on him.  They did awesome at the competition. 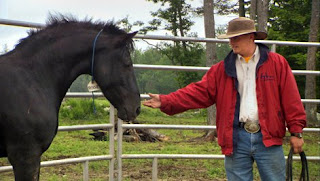 Kris and Nik Kokal: Nik and Kris were the first competitors to ever train and compete without the use of any bits, shoes or spurs and Nik at 18 years of age, was the youngest competitor to ever participate at the top elite professional legends division.The two home-schooled brothers were the ones I mentioned that swam with their horses, Ranahan and Sioux. Kris blindfolded his Mustang, Sioux, and taught him to trust his every ask.  They went over bridges, down steep embankments, they trotted, loped--all with blind (or blindfolded) trust. For such young men, they did an awesome job and their horses blossomed under their care. Neither of the boys wanted to part with their horses, but it was financially impossible to keep them.  They have a website and a training program where you can follow them--Horse Tenders. 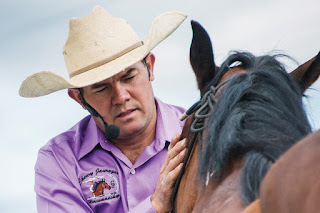 Jesus "Chewy" Jauregui: I saved my favorite for last.  Surprisingly, Jesus came in 9th at the Extreme Mustang Makeover.  My guess is that they're looking for super flashy performances--Jesus' performance was rock solid.  The flashiest portion of it was when he stood on Compadre and encircled them both in a big lasso.  While it's a great trick, it may have showcased his roping skills more than Compadre's abilities.  In any case, I could have watched a whole documentary on him gentling his horse.  He had the rare combination of quiet strength and love for his horse.  You could tell it was in every cell of his body, right into his soul.  And, you could see Compadre looking to him from Day ONE.  I found this article on Jesus "Chewy"Jauregui.  I found him here on Facebook, if this his real facebook.  It seems to be.

By the way, who is on the cover of the movie?  I don't remember this person. 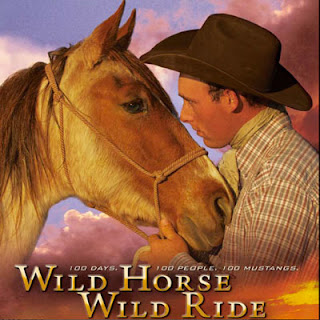