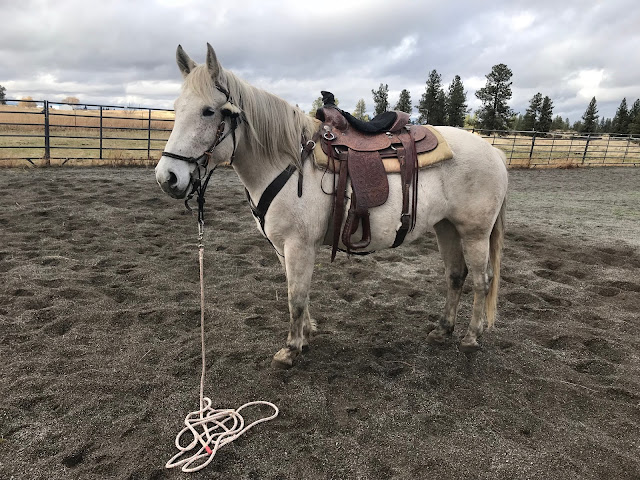 This is officially my 5th ride on Bee, but I'd really say 2nd, since the first three could barely be called rides--they were more about getting on to see what I had and didn't have so that I could go back to the drawing board.

Today, there were more distractions, and she started out a little grumpy.  You can hear the planes going by (they're training at the base today) and it rained all night and is cold out.

I lunged her in saddle, threw the rope around her, bent her in on both sides, walked her around the arena and over the poles, and then mounted.

At 3:19, you will see her going to the side and backing up a little.  That is because she sees the obstacles in her path.  She does the same thing, but worse, when I'm ground driving her, until she gets used to going over them.  You'll see her think through and resolve the issue, then move forward.  A similar thing happens at the poles.  She wants to move them out of our way.  Horses are very unsure of themselves when they first have riders on their backs, and they feel less confident of their feet.  She doesn't want to take bad steps, so she tries to move the poles.  I think that's quite nice of her..and smart.


She was bracing against the bit today, so tomorrow I'll go back to ground driving.  I'd rather work on softness in the bridle from the ground than when she is also worried about balancing a rider.  For a while, I may be alternating between driving and riding.

Before and after, we worked on going through puddles.  Like most Mustangs, she likes the water.  I imagine it brings back times with her herd.  Every mustang has been to a watering hole with their mama.