Something is Starting to Take Flight 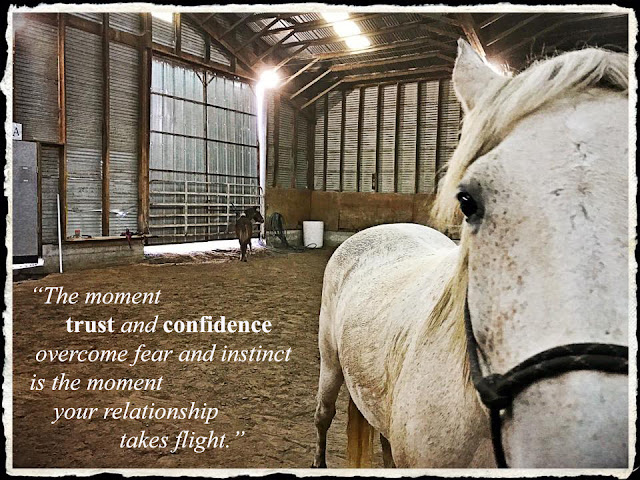 "The moment trust and confidence overcome fear and instinct,
is the moment your relationship takes flight."

I thought I was having company last night, but they ended up running late, which allowed me to grab Bee and walk her to the evening ground clinic next door.  There were seven horses in the clinic, all new to Bee and, trapped inside the indoor arena, she had never, in the ten years I've had her, been in a situation so seemingly vulnerable.

Her entire body shook at my side: the muscles in her hind end, her shoulder, her legs--she was quivering from tail to nose, and my heart broke for her.  I wanted to assure her that it was okay and to take away her fear.  But I couldn't.  Instead, I was as tender as I could be, as strong as I could be, as reassuring as I could be.

Though she was so truly terrified, she still stood her ground by my side.  She did not push into me. She did not try to pull away. She did not whinny for help.

As we began to lead them around the arena, I tried to hide my own fear that she would do something dangerous--overreact to an obstacle, another horse, a sound, a shadow.

When the ground work started--which she did entirely flawlessly--moving out both directions, turning, whoaing, taking up different leads--she was as sensitive as a whisper, and she had started to calm.

One horse drew back in his circle--trying to flee our direction--and she stopped on her circle and looked at me.  I reassured her and asked to move back out--she did.

It is moments like that which make me feel like my heart is growing for her--just swelling out of my chest with love for her. You know--that aching, happy, longing feeling you get.

Something is definitely starting to take flight.

Labels: Beautiful Girl, Day 113, Trust and Confidence in a Horse