Such a Scare With Leah

When one door closes, another one opens--or so they say.

Leah has to be pulled out of the herd, every day, before we let the others out to graze.  When she came into her stall for breakfast, she was perfectly sound, but two hours later, when I went out to ride her--she was lame on her back left leg. Really lame.

I felt her leg for heat.  Couldn't find any.  Checked for swelling. Found a little around the fetlock, but it was hard to tell.

I started to list the facts, trying to reconstruct what may have happened to her: 1) She was in a stall eating hay. 2) Whatever happened occurred within a 2 hour window 3) No signs of blood or trauma 4) The other mares had gotten themselves into the stall next to her and were hanging their heads over the rails towards Leah when I walked out 5) She still had a ravenous appetite 6) She didn't want to bear weight on the limb, but could bear weight if asked 7) Mild swelling was at the fetlock. 8)Possibility of hoof abscess not ruled out.

This is what I wrote yesterday: It makes me realize how desperately attached and invested I've become to Leah.  I have felt sick to my stomach all day.  So much time.  So much heartache.  So much partnership--FINALLY.

I watched her all morning and then had to go to work.  Last night, my husband and I went out to see her, and she seemed a little better.  We decided to stall rest her and see what we had today.  Today, she's walking like normal with very mild swelling still in the fetlock.  If I had to guess, I think she kicked out at the other horses and bruised her leg in the rails.  There is no sign of any trauma--scraping--but that is the only possible answer. I can't say we're completely out of the woods now, but I'm much more optimistic, and I don't think it's time to call our vet out...yet.

While Leah was on observation, I opened another door, turning my attention to Beautiful Girl, who will officially start training next Thursday. I'm trying to get her caught up with everything she has already been trained to do before we start in earnest.  Our plan, so far, is that Rebecca will come here every Thursday night to help me.  Beautiful was trained at a young age to carry a saddle and respond to pressure from the ground.  She still remembers those early lessons well, but we need to get her to the next step of carrying and responding to a rider.

During yesterday's session, I asked her to trot over the rolly polls--she did awesome!!  One thing I can say for her, she knows where all FOUR feet are at all times and has great foot control through obstacles.  Way more than Leah, I might add.  Way more than most horses.

After that, we went to the tires.  Beautiful, at first, smelled them, then she put her a foot into one and walked over it.  Wow!  Here she is doing it again after a little break.  I had my camera in front of my face, and at first, she wouldn't come over at me--probably thinking I just wanted to take her picture.  I put the camera down, looked at her and called her to me--she started to come across. 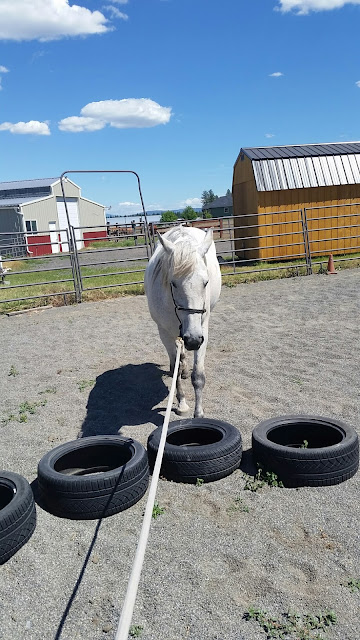 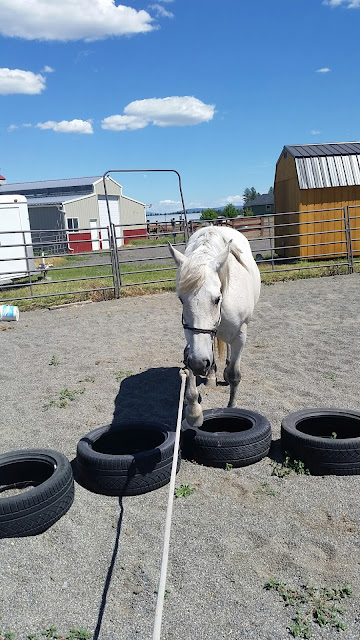 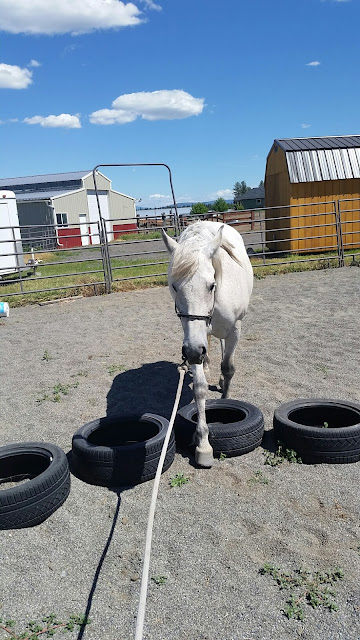 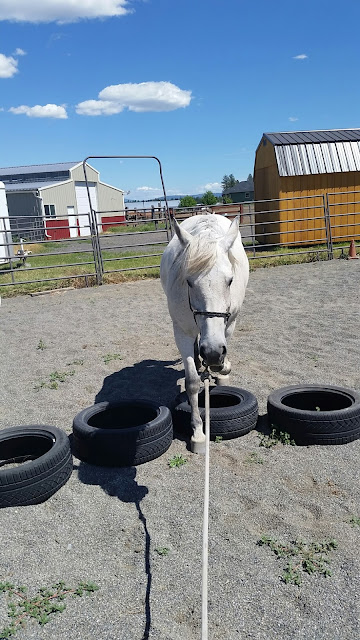 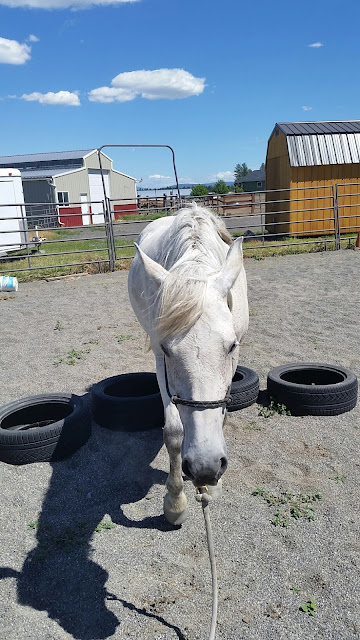 She also did the labyrinth, which is a bit tricky since it has two turns.  Beautiful was sensitive and responsive to each ask of a foot.  She did go out of the labyrinth on the first try, but she didn't overreact.  We tried it again and a light bulb went on--she got it!  You'd think backing up through a labyrinth of poles would be easy, but to horses, who can't see where they're putting their feet--it makes them claustrophobic. They have to concentrate hard on your asks--and that keep them from thinking about other things--like their herd.  It demonstrates trust in their handler, too.  I was happy to see that she and I still have a connection.

When she was done, I gave her a treat and put her back.  She followed me along the fence line, which I thought was very sweet.

I have mixed emotions today--excitement for Beautiful Girl and her potential--and sadness, that Leah is / was lame.  I'm just hoping for the best and seeing some light at the end of this unexpected tunnel.