Instead, Imagine Everything Will Go Right

I want you to imagine a woman.  She's wearing some old jeans and cowboy boots, a black, long-sleeved shirt, and a tan felt cowboy hat.  She's out near a barn, loading saddles and tack into a horse trailer.  Her horse is tied to that trailer, watching, wishing she could bend low enough to grab a bite of grass.

The woman is deep in thought, playing movies in her head, What-if movies.  The scenes in her imagination are vivid.  She sees herself on that very horse approaching a heavily wooded stream, narrow banks on both sides, and the horse refusing to cross.  She sees the horse rearing  into the air (she saw that happen three weeks ago in real life to another horse and rider), spinning away and running--hell bent on saving its skin. She can't stop the mare, and she is it as its mercy in that break-neck sprint away from what it thinks is danger.

Does she jump off and take her chances? Does her foot get caught in a stirrup when she tries to jump off, the horse pulling her along the ground behind?  Does the horse trip and fall onto her? Does it brush her off against a tree?

All these awful movies play together in her mind--a crescendo of fear--and she wonders at what she's doing--even  thinks she may need to reconsider.  She looks over at the mare with its sweet eyes, Can I trust you?  Then the woman thinks to herself,  If anything happens, it won't be the mare's fault.  It will be mine. 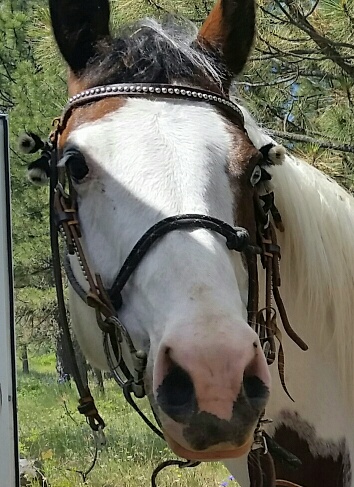 She wants the  mare to succeed, so she starts to play a new movie--one where she gets off the horse as soon as the mare starts to feel tense.  That's easy enough for me to do, she thinks. I can easily get off and on my horse.  Then, I'd just walk her across and let her play in the water.  Show her it's okay.

Stop. But isn't that showing Leah you expect failure?

And she thinks, I. Won't. Do. That!  I'm going to force myself to see a new movie.  I'm going to stand right here, stop what I'm doing, and will myself to make another movie.  In this movie, my mare walks boldly to the water, looks at it, and plods through it, with the confidence I've instilled in her, to the other side.  In this movie, I rely on everything I know, everything I've ever done with horses in the past, everything I've trained this mare to do, and it leads us to success.  I WILL KNOW what to do when it's time.  This mare knows what to do, too. 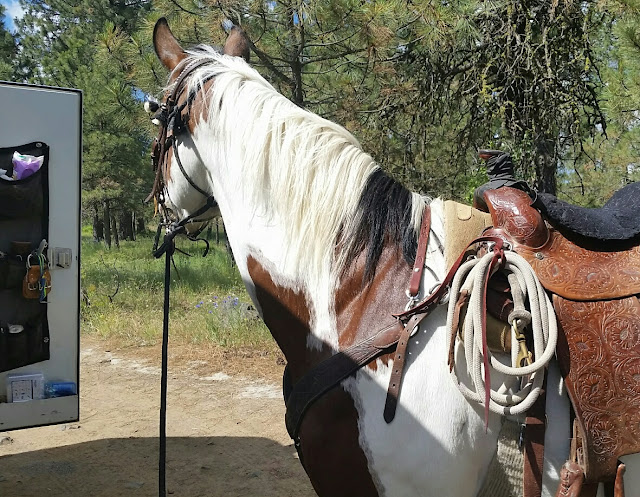 What I just asked you to imagine really happened to me yesterday.  It was my turn to ride Leah at Palisades Park, through the water crossing I shared with you a few weeks ago in another post.  I've only ridden Leah once since getting back from vacation, and I had those bad scenarios flooding my mind and almost paralyzing me with fear.  It took me a long time to catch myself and realize what I was doing--I was visualizing FAILURE. And, that visualization almost brought me to quit.  It was like a runaway horse, and I'd missed all the warning signs leading up to its final evasion.

I had to take the reins of my mind--more dangerous than anything Leah could ever do--and pull it into a one-rein stop!  I kicked it's left hind around and bent it into a circle. I made it do some real work.  I made it imagine what SUCCESS would look like.  How it would feel--how it would happen.

With that new vision in mind--the confidence I would know what to do and she would, too--I loaded Leah up and hauled her to the trail head to meet Rebecca.  We rode for a while and then we came to the path where Leah could hear the stream.  It was narrow and steep--dense bushes framing both sides of it--barely enough room for a horse to squeeze through--branches rubbing the sides of the saddle--my boots--her shoulder and hind--but she soldiered through it, toward the sound of water.

When we got to the water, the horse in front stopped.  She even looked as if she'd start backing away towards Leah and me.  Rebecca gave her a loose rein and didn't push her too hard, but instead let her look at it and think about it. (It was beautiful to watch) Too much pressure and that horse would have reared or bolted--but not enough pressure and the horse wouldn't cross.

Leah stood behind, perfectly still on a steep incline--her hind end well above her front end.  But she wasn't scared.  She didn't feel like she was going to turn and bolt.  In fact, she felt as if she wanted to push the other horse forward.  So, I let her take a few steps toward her, but kept enough distance that we wouldn't cause the horse to feel too pinned in.

The first mare put her front feet into the water, then her back two.  I rode Leah up beside her, and Leah did a nice little jump into the water, too--a let's get 'er done kind of jump.  I gently stopped her mid-way and let her stand.  She was calm, but ready to plow on.  The lead mare had started drinking the water, but Leah didn't seem inclined.  After standing for a bit, I decided to reward her by moving on.

I've put a lot of thought into that reward.  Always, the reward on the trail is forward progress, and Leah learns well and fast from it.  She wants to get back to the trailer for food and back home for safety.  Whenever she does something the way I've asked, the reward is to move on.

This wasn't a morality story, but if a moral could be drawn--a bit of wisdom to pass on, it is this:

Instead of imagining what failure looks like, stop yourself and force yourself to imagine what it would like if everything went right.

I promise you, if you've laid the foundation--it will help you achieve a positive result.

I can almost say Leah is a trail horse, and I can almost take the "green" out of the title.