When I Am An Old Horsewoman: In the Saddle at 50 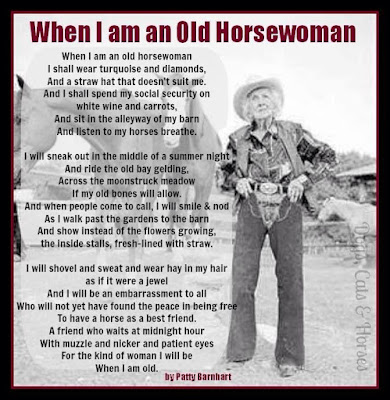 "And I will be an embarrassment to all who will not yet have found the peace in being free to have a horse as a best friend."

For the record, best friends do fight.  If  you haven't ever fought, you're not truly best friends.  After all, isn't that what tests your friendship?  Anyone can be friends with a person who is always, 100% agreeable, but who will remain friends after a fight?  That is where friendships are tested.  That is where they are sifted out.  That is also where many people part ways.

Leah is my friend, and it was Leah who I took out on my 50th birthday.

We spent time in-hand on the trail obstacles: 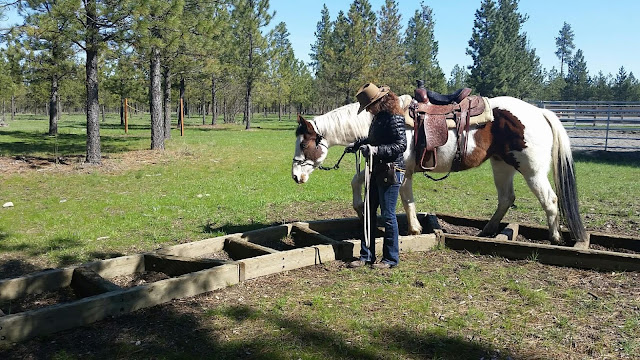 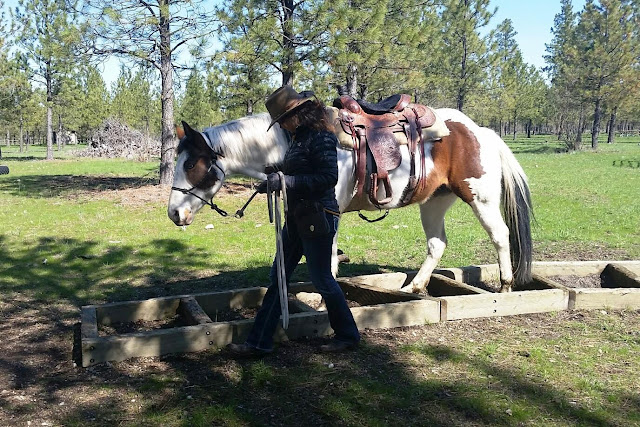 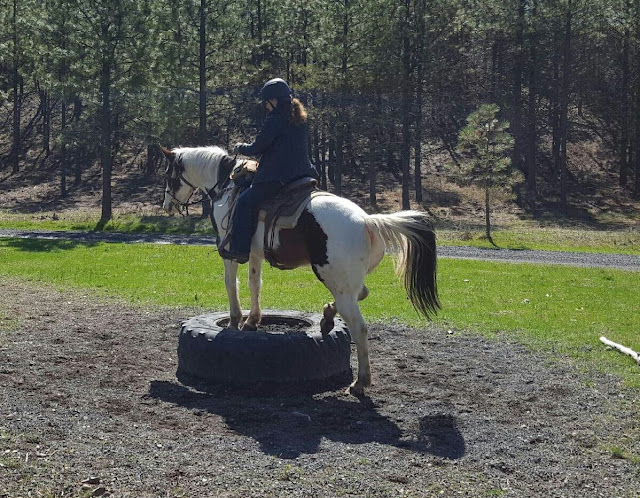 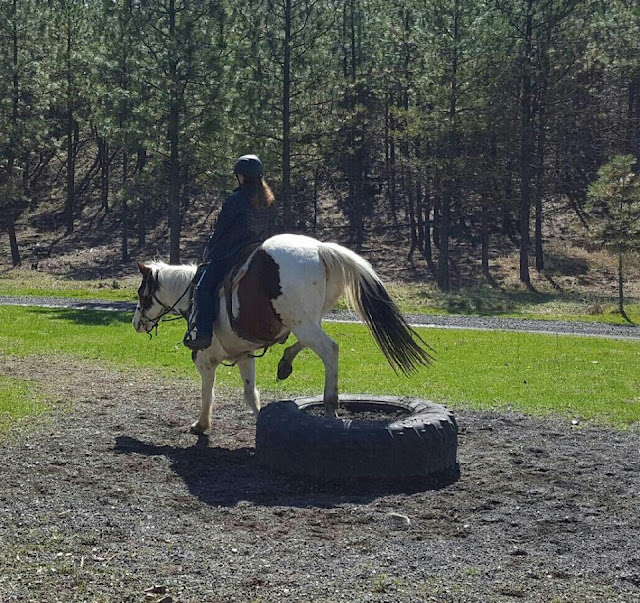 Leah did wonderful, as you can see, except on two obstacles: the mailbox & the labyrinth or maze.  Backing through the maze made her nervous.  It's a delicate placing of each of her feet, and a great deal of concentration, as our bodies communicate with one another in this fine, intricate dance.  Backing up, she can't see where her feet are going--which takes a great deal of trust in the rider.  She was trying, and she did it, but it heightened her anxiety.  She was giving up control---really having to think hard about bit, and leg, and seat, and feet, and hind, and front--you get the picture.

The mailbox aversion is strange, but I think it reminds her of the gate incident last year and that feeling of being pinned in.  I had her get as close to it as she could comfortably handle--several times--and praised her.

After the obstacles, we went out on the trail. She is barefoot, and it is extremely rocky, but she tore up ground like it was nobody's business.  So much for her laminitis.  I think we can safely say that has resolved.  I rode on a loose rein as much as possible, but there were times she thought about taking advantage of it.  Luckily for me, Leah gives a little warning before she bolts.  I can read her mind through her body.  So, I closed her exit and took away her rein before she could accomplish it.  I think trail miles and consistency will solve that issue, but this was her first ride out.  When she wants to bolt--always to the left, btw, it is pretty tough to stop her, so she must have been 50/50 on that to begin with.

When we got toward the end of the ride, I asked her to go through some large puddles--fairly wide, not deep--and she would have none of it.  She started to bolt to the left through the trees--I'd say she was about 90% committed at that point--maybe 95%.  I say that because she was going to fight any restriction I placed upon her, but a better rider may have been able to work with that small crack of possibility--that 5 or 10% she hadn't committed to bolting.  It was not in my ability to do so, and I knew it, so I released the pressure before she slammed me into the trees.

After that, I lost our connectedness.  She tuned into the gorgeous Fresian yearling who was being ponied along the ride.  She has baby fever in the worst way and would steal that baby right away from its mama if she could. 😂  Since I'm using percentages, I'd say our togetherness started out at 80% on the obstacles, dropped to 75% at the start of the ride, and dipped to 30-40% after the water crossing.

I'm going to ride with my trainer next time and prepare to spend a lot of time at the water--whatever it takes.

But my 50th birthday ride wasn't the time or place for that degree of lesson.

Instead, it was a time to hang out with some of my horse friends--both human and equine.  And yes, that is the yearling standing between us.  Can you blame Leah for wanting to steal her? 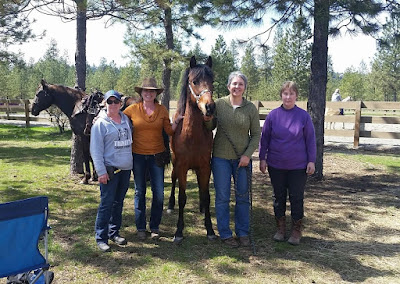 **Another successful day in the trailer, too***
**Pictures coming soon of the Cowgirl Cave!***
Posted by Linda at 9:22 AM