10 Things Old Red Taught Me About Living a Long Life

I may, or may not, live a long life, but I know someone who did--Old Red. And long before I had to let him go, I had already decided that I wanted to be like him. Now that he's gone, it's even more important for me to remember.

I thought this was a good place to start. 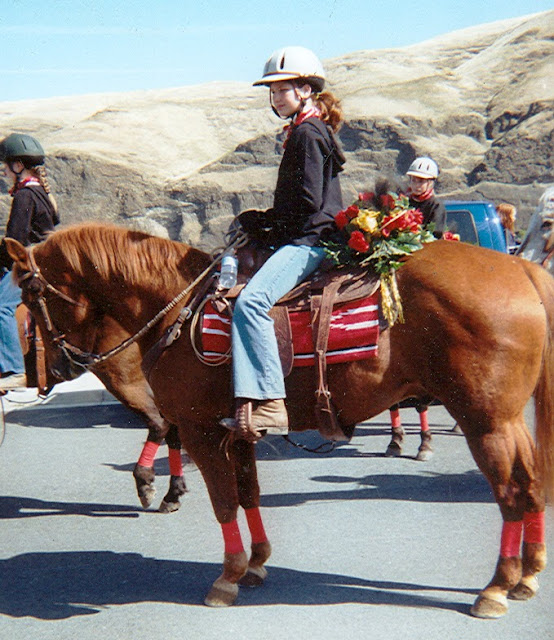 Shadow died last fall, but I was surprised to see that the herd didn't miss him. He was the alpha horse--the one everyone feared--but he hadn't made himself important in their day to day lives.

Red, on the other hand, was horribly missed by horses (and humans). It threw us all into a flux. Everyone loved Red. From the pony, to Cowboy, to Penny and Cowgirl, there wasn't a horse in the herd that Red hadn't played with and watched over. When I'd take a horse away in the trailer, no matter which one it was, Red would come running up whinnying to high heaven when they returned.

2. Have a fierce loyalty and protection over your herd.

Red watched over every move of the herd and was one the first to come running in their defense. He was the babysitter--the father figure. He wasn't born into the herd, but it was the herd he ended up with. And, as we introduced new member after new member, Red brought them into that fold of loyalty and protection. That devotion and need to protect probably added on years to Red's life just because he was so determined to be there for them.  And, it didn't hurt that they returned the favor, allowing him to eat and drink first even when he couldn't fight his way to be the first.

Red was not that "look at me!" horse.  In fact, you'd probably not notice him at all if someone didn't point him out.  He was always the one who stood back, rather than mauling guests.  Even if treats were being handed out, Red let the others get them.  He didn't puff himself up to look 3 feet taller (like Cowboy does) or put on airs that he was tougher than he was.  He just did things quietly in the background.
4. Take pride in what you do.

Whether Red was giving a ride to a two year old or the Queen of England, on a parade route or in our backyard, Red would square up and hold himself with pride. Even though he had arthritis, he NEVER took a bad step with precious cargo on his back. If Red had a job to do, he did it well, or he'd die trying.  At 37 years old, Red still knew there was a job to be done, and he was happy--and PROUD--to do it.

5. Be the one people can trust.

We always knew we could put anyone on Red's back and he would keep them safe. Even before us, his previous owners loaned him out as a therapeutic riding horse. And before that, the rancher who had raised him used him as his "girlfriend horse." His whole life, Red was the horse people could trust. In return, it guaranteed him loyalty from humans and horses. A testament to that, he only had three homes in his life. When we bought him from his second family, his owner ran out of the barn crying. It tore her apart to let him go.

Up until the day he died, he was still that horse we turned to for the kids, and the kids (and parents) were indebted to him.  In fact, I still do not feel like I fully repaid my debt. I was at the Country Store yesterday and, for once, I was not there to buy Equine Senior.  All I had was a truck full of wood shavings.  It felt empty.  And our bill!  It was so cheap.  I realized, I had NEVER regretted the trips to the store or the money it took to buy the special feeds.  It was an honor and a privilege--an honor and a privilege that I sorely miss.

We all want a safe place, a place with people we can love and trust to have our best interest in their heart.

6. Lose yourself in Duty, and live for others.

Even though Red had arthritis, and it must have hurt, he never stumbled. He never stood over feeling sorry for himself either.  Red was always too focused on taking care of the herd.  The last days of his life, I had locked him up because I didn't want him to slip on the ice, and every time I went out there to feed him or groom him, he demanded I let him out to his family.  There were some nice days that I'd let him out for a few hours, biting my nails the whole time, but for the most part, he stayed in....and hated it.  No, Red lived to be with the ones he felt a calling to oversee.  It was his life's blood.  There's a saying, there's no "I" in team.  Well, there's definitely no "I" in herd.  At least not for Old Red.
7. Go with the flow.

When life brings you a new circumstance, even if it's not what you wanted, adapt. After Red's second owner ran out of the barn crying, he spent months at the end of his run looking up the road toward the direction she'd driven away. It seemed as if he was waiting for her to come back and get him, and it made me feel like I'd stolen him.

Eventually though, Red adapted to the circumstances and threw himself into his new friends--Shadow & Cowboy, and his new little girl, Shiloh. A few years later, he was helping to raise a palomino weanling, Cowgirl, the filly Shiloh had saved all her money to purchase. Cowgirl and Red bonded from day one, and when Cowgirl grew up, we called them the married pair because they were inseparable.

It became impossible to imagine our life before Red because it was as if he'd been with us, and all our horses, his whole life.
8. Never grovel, but instead, have pride in your principles.

Red wasn't one to beg, like some horses.  Not for a treat.  Not for a good petting.  He did what he was asked with pride and precision, and then he expected to be released to live his life.  Whether it was a night at 4-H, loping circles, or a four hour trail ride in the mountains, Red did the job.  In return, he demanded the essentials in life.  He wasn't a people horse--that is to say, an "in your pocket" horse.  Instead, he was the horse who got things done, fulfilled his end of the bargain, and expected the accompanying benefits in return.
9. Don't get caught up in other people's drama.

When all hell broke loose in the herd, Red was the one who would be quietly grazing a ways off in the distance. When the drama slowed down, Red would graze a little closer until the offender would come alongside him and graze, too--in synchronicity--trading in drama and chaos for peace and harmony.
10. When it's time to go, go.

Whenever I eat or drink something especially yummy, I have to remind myself to stop and not eat more. I ask myself, will eating or drinking more make this (fill in the blank) taste better? The answer is no.

That's how I hope I'll look at my life when it's time to go, basically, that I've enjoyed it so much--a little more isn't going to make it "better."

Red did that. The winter of 2016-17 will long be remembered as one of the hardest in Spokane. It got cold early and it stayed cold. There were nights I'd be out feeding and grooming Red, and I'd apologize for asking him to go through it. I even told him, if he was ready to go, he could go--I wouldn't blame him.