“And when you're alone there's a very good chance
you'll meet things that scare you right out of your pants
There are some, down the road between hither and yon,
that can scare you so much you won't want to go on.”
Dr. Seuss, Oh, The Places You'll Go


The farrier called and said he was going to be late today, so that gave me an hour to work with the horses.  I decided to make my training about issues that would help my farrier--picking up their feet, and, I chose my two worst horses in that department as my pupils--Cowgirl (my daughter's horse) and Lily (the spoiled pony.)

Many years ago I boarded at a large facility and one day, when my daughter and I went out to visit our horses, a young lady had just been taken away by ambulance.  She was preparing her horse for barrel racing and it kicked her in the face.   Her family was well-known and well-respected in the horse world as trainers, racers, and ropers.  They knew what they were doing.  The way I looked at it, if that could happen to her, it sure as heck could happen to me or my family members.  The horse had smashed in the front of her face, but the girl did survive.  Why the horse kicked, I never found out.


Days afterward, hoping to avoid a similar fate, I called my farrier and asked if he'd give my daughter, husband and I a class on how to properly handle our horse's feet.  I offered to pay him the price of a shoeing.  He accepted.


What I learned, and have done ever since, is to face opposite the horse.  If he's pointing west, I'm pointing east, and I never turn around to look at him or his legs.  Instead, he taught us how to face the opposite direction and do everything we needed to do--pick up the legs and place them in between our own, and pick out the hooves.  He also taught us, and demonstrated to us, how to keep ourselves in a position where we could easily push away from the horse if things went badly.

But let's face it, handling those feet can be dangerous and scary.  It was the LAST thing Beautiful Girl, my mustang, gave me--her weapons, as my farrier called them.  And, can you blame them for wanting to keep control of them?  Those feet are the most important elements to their survival.  And, they are deadly.


Cowgirl is an alpha--with the horses--and people.  There is almost always one foot she refuses to pick up and, if you push her, you're going to get a fight.  Today, it was the back left.  When I got to it, she planted it firmly on the ground, tensed her body, and had a hard eye. Her body was saying, Just try to pick it up! I Dare you! This sh** is FUN for me!

There's a time when I would have pulled on it and simultaneously pushed her with my left shoulder to knock her off balance so that she'd have to shift--thus, freeing up the foot.  That used to work really well for me until I realized I want my horses to choose to do everything.  Choosing is much safer than forcing, in my opinion.

I want them to lift the foot as soon as I move toward it, and  most of my horses are very good at that.  So much so, that sometimes it seems as if they're getting ready to kick me as I move around.  In reality, they're shifting and freeing the foot for me to pick up.  They're thinking ahead and anticipating where I'm going next.  (I try to mix it up so that they can't always predict it.)

Back to Cowgirl.  I asked for the left back--the one she had planted firmly on the ground--repeat, FIRMLY.  She didn't budge.  I got up and went to her head and wiggled it back and forth a couple of times, to soften her.  Went back to the foot, still wouldn't budge.  Went back to the head, wiggled the muzzle a bit.  She shifted, licked her lips, and lifted the left foot for me.  Many times it's just about getting them out of that fixed mindset.  They don't really want to be jerks--it's just what they do in the herd--a dominance thing.  We have to snap them out of it.  Hello.  Hello.  It's me.  I pick your feet.  Make you feel better.  Remember?  Hello, in there.

Oh yeah, what was I thinking, grand-mum, here you go.

I worked with Lily and Cowgirl for about 30 minutes--lifting & picking their hooves, grooming, and then doing it all over again.  Lily did great for the farrier--much better than she's ever done before.  Cowgirl initially resisted on that same left back foot, but she quickly thought about it, corrected, and gave it to him.

Whew!  All seven were awesome for the farrier today!  Win-Win!

Yesterday I worked alone with Beautiful Girl--putting my weight on her back.  She did better, but we still have some work to do.  Here's what it looked like from my vantage point. 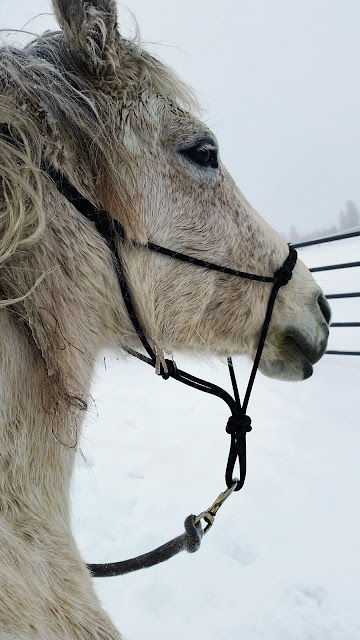 I'm not digging that eye.  It doesn't look happy.


Here are some more photos from our day: 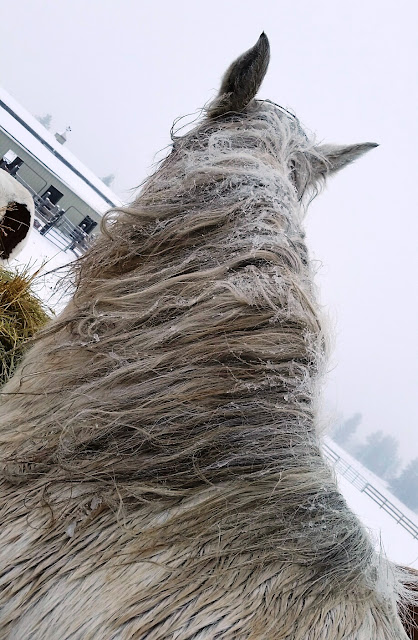 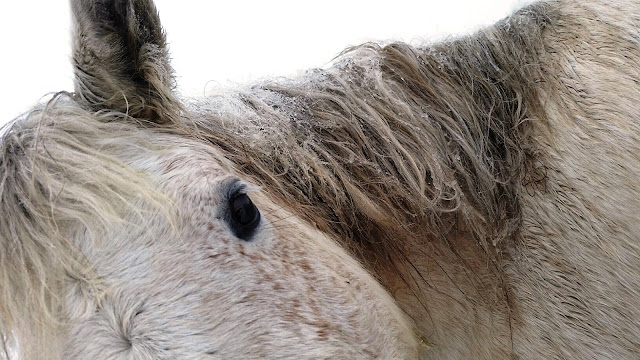 The snow is so dense, it's difficult to see variation in it.  This is the view as Beautiful and I walked toward the arena. 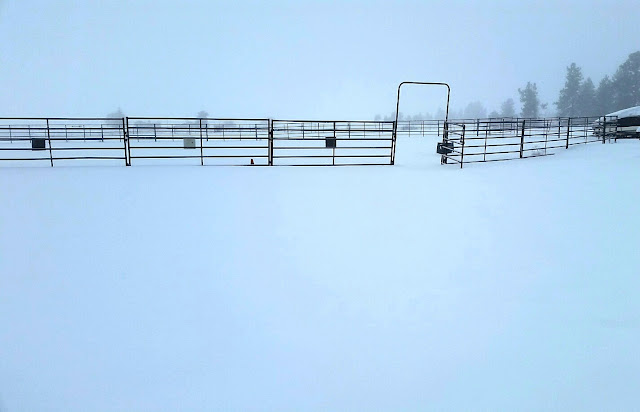 It's either this deep...or deeper.  Beautiful looks longingly back toward the barn. 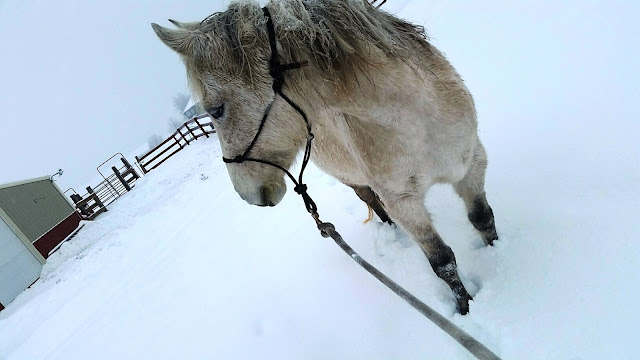 The view looking down on her back from my mounting place. 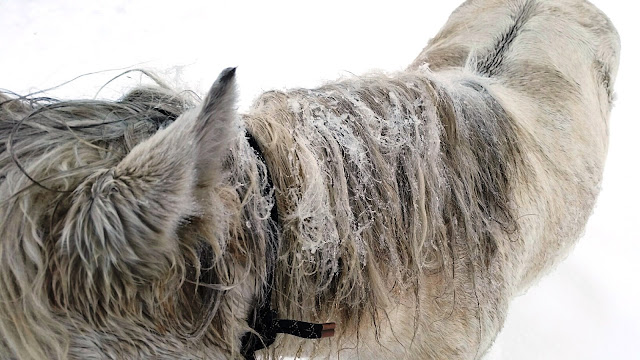 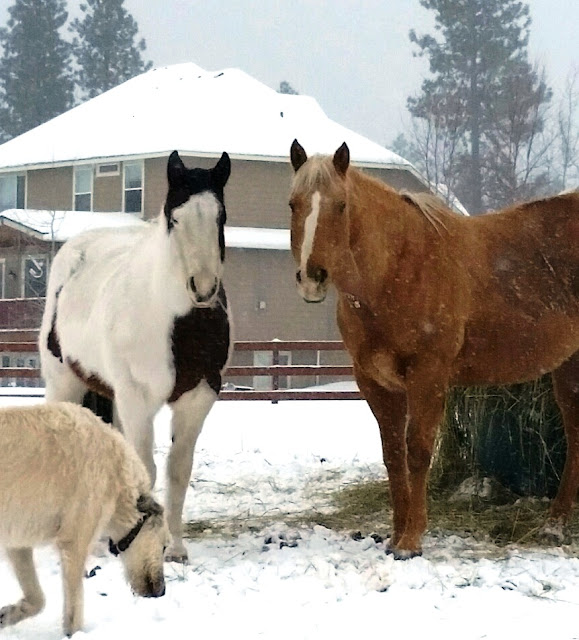 Since it's January, all the horses are officially one year older.


Here are my horse's ages:

Here's a post from 2008 where I introduced our herd and their ages.

Happy birthday to all the horses out there!