Creativity, Sadness, Fire, Transformation & the Power of the Moment

A few years ago, I bought the book and cards, Way of the Horse: Equine Archetypes for Self-Discovery — A Book of Exploration and 40 Cards

, by Linda Kohanov (art by Kim McElroy).  Like many horse lovers, I had also read Linda's book, The Tao of Equus: A Woman's Journey of Healing and Transformation through the Way of the Horse

and loved it.  All of the cards that came with it are beautiful, and everyone of the cards offers some insight into ours and our horse's lives.

There are several ways you can use the cards.

1.) You can spread them out, look at the pictures, and see which one speaks to you.
2.) You can turn them face down and choose a card.
3.) You can choose five cards and lay them out in the pattern below. 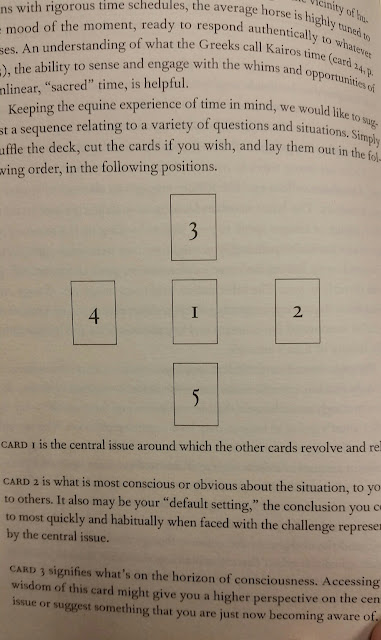 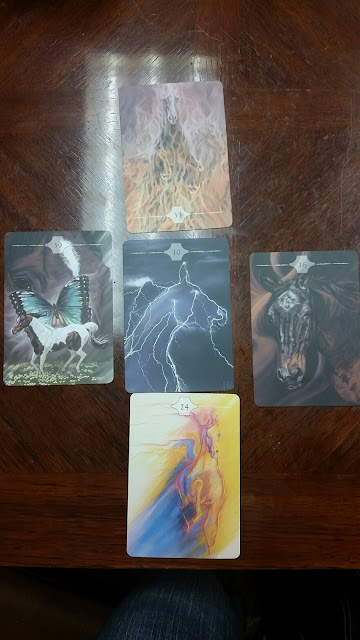 I had been feeling "off" since Shadow's passing, so I wanted the full meal DEAL.  I chose five cards. 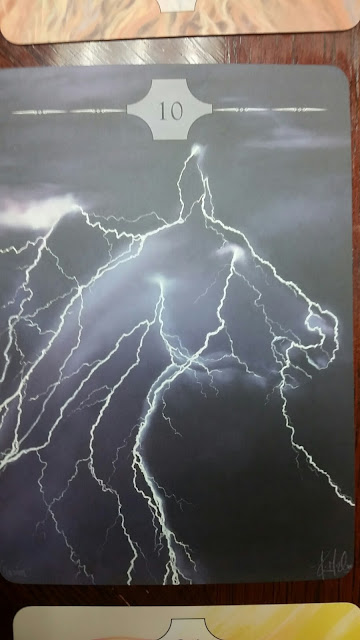 My central issue was card 10--Lightning Horse--Creativity.  It's all about less words. Feeling the experience, rather than trying to explain the experience.  It's about the power of NOT putting something to words and then the way it can move you to deeper insights in life AND with horses.

"When you've truly made the connection, riding a horse feels like a series of illuminations rewarded by surges of endorphins. Most of these insights, however, are felt and put to use long before the conscious mind can fathom what's taking place. Flashes of clarity mixed with waves of elation flow...It is a creative act, a feeling of music in motion, of a sublime and silent improvisation between two souls that can never be accurately described."

I can see that is where I'm at with Leah.  I used trainers to get us this far together, but the next step is she and I alone--finding a way through whatever it is that's blocking her--or blocking me.  Becoming a team of two and not three or four or five.  Since we took a few steps back, she has taken a few steps forward. She loves to greet me now and get an impromptu massage in the pasture.  Her eyes are soft and open towards me.  It's where we should have started a year ago. 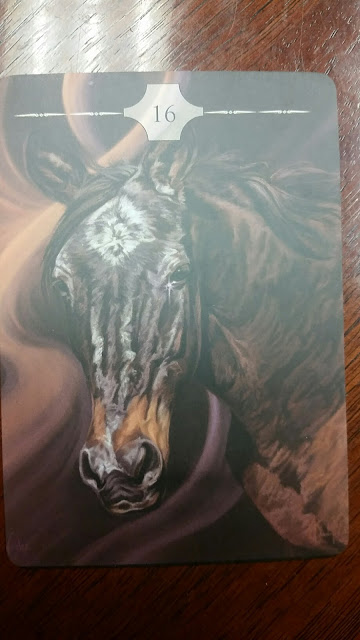 Card 2 is the obvious or most conscious situation to myself and others, and it's The Master of Sadness card.  Isn't that appropriate?  I just lost Shadow.  What could be more obvious than sadness?  But when I started thinking about it, I realized I've been kind of sad for two years.  My mom got breast cancer, two months later my sweet father-in-law died, two months later my youngest son joined the military &  I live(d) in fear of a war, six months later my daughter got married and then my sister moved away, Shadow died and here I am.

This card is about "Sadness or Grief, The Power of Tears, and Release Rejuvenation". It says about it, "Sadness signifies it's time to let go of a relationship, job, or perspective that no longer serves you. Tears help you release attachment to an old way of being, rejuvenating you for the next stage of growth.  Some people are more afraid of sadness and grief than fear or anger, yet holding back those tears leads to despair and depression."

She writes about her sad horse, Noche, and how he grew old, but she wasn't willing to let him go. Then, it was as if he was detaching from the herd and her, and he was making a choice to leave.

"And when his final hour arrived, I was light enough to be there for him, without reservation, without clinging, without panicking, without begging him to stay for my sake, realizing ...he  not only reclaimed his dignity in death, he opened my heart to infinity."


Shadow had also detached, and when he did die, the herd acted like nothing was different.  At first, I thought it was mean of them--or shallow--or un-noble--but I think it was their natural way.  Shadow seemed like a sad soul this last summer, and he'd often have a tear coming out of his eye whenever I'd pet him.

These cards were all random, but they were amazingly true to my experience. 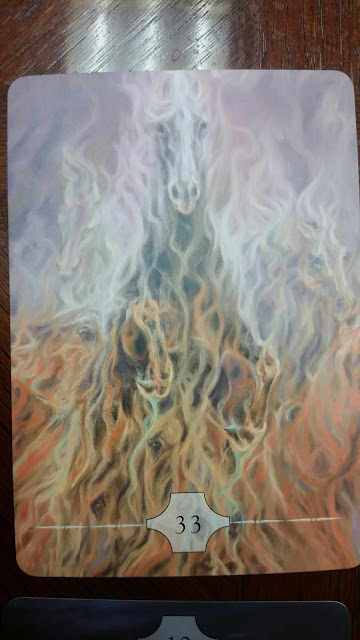 Which leads me to card #3--or 33 in the deck--Bonfire.  A sudden shift, clearing and releasing, fuel for transformation.

And then, the card I loved to see most because it makes me think of Shadow running on some heavenly plain. 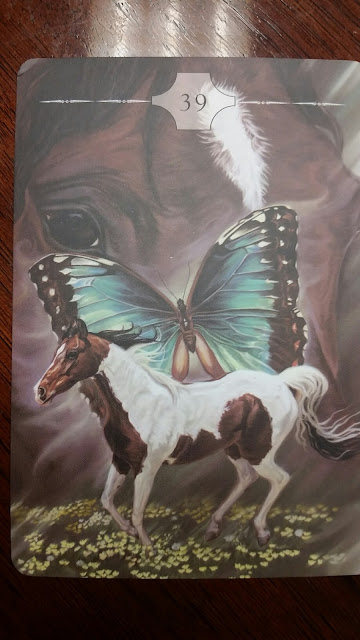 "We are not born to live and die, but to die and be reborn many times before leaving this earth."


My last card was 24--Kairos--horse time--moments infused with meaning and choice. 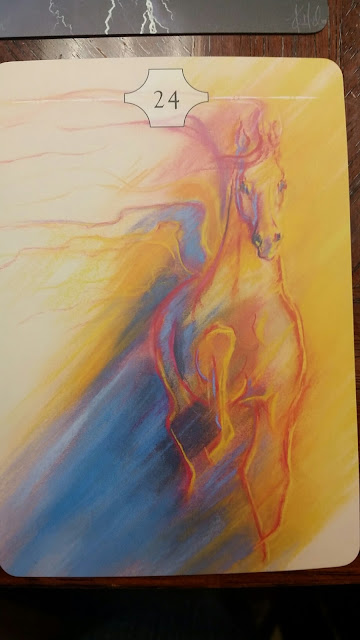 "These animals live in Kairos time, always open to the next meaningful opportunity for harmony and communication, without holding on to 'what could have been'."


It was fun to do this and it opened me up to some new ways of thinking--which seem more memorable--visceral--emotional since they're associated with these pictures.

If you'd like me to pull a card for you, let me know!  Who knows what kind of insight may await.
Posted by Linda at 5:46 PM

Labels: Horse Spirits, Horses in Heaven, Leah, Shadow, The Tao of Equus, Way of the Horse