A Hand That She Can Trace 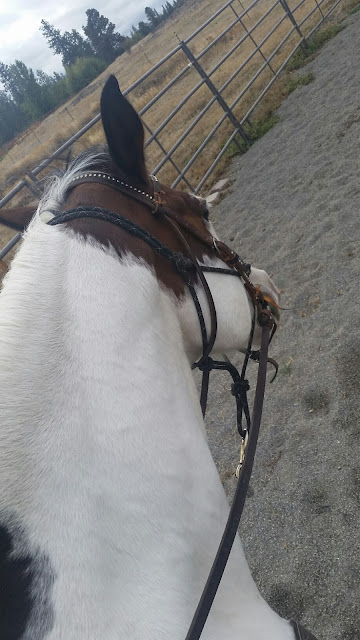 Last night I had the kind of experience that makes you want to quit on a horse--or at least put them away for a while.  And, that may still be the case, but not today.

I took Leah next door to the barn for an evening ride.  One of the other riders brought a mare and foal and separated them to ride the mare.  It got Leah off on the wrong foot.  She was very nervous.  We went into the arena and walked around--she did pretty well.  I climbed into the saddle and rode her clockwise--she did pretty well.  I turned her counter-clockwise--she decided to bolt to the left.  She kept doing it, so I dismounted.  My trainer climbed aboard to see what was going on with her and it escalated.  She tried to rear up and get her off balance.

We had a talk afterward and we both felt like, at this point, Leah isn't safe to ride. And, I'm not going to ask anyone else to ride her for me--that's not fair to them. Rebecca has already ridden her enough to give me a good idea of what I'm facing.  From what she and I have seen, Leah gets nervous (especially on the right side) and then, it's as if a cog gets stuck and she can't think past the fight.  It started on the day I took her on her second trail ride with three other horses and then asked her to open and close a gate.  It esculated when I continued to work on the gate issue and she fell.  We found out that there was pain at that time, too.  So, maybe a perfect storm of events?

At any rate, here we are.

I couldn't get to sleep last night with all of it running through my head. Nice horse. Gentle horse. Usually calm horse. Perfect on the ground. Goes left well. Doesn't go right. Bolts. What should I do?

I got my phone out and made notes, because I have to believe we can get past this--somehow.

"Lots of bending and massage left and right. Wide circles left and right at all three gaits. Tarp training (to raise the anxiety and work through it.) When she was young and we were "sacking her out" she would go and go and go--unlike most horses who would stop and give.  I had to stop her myself and introduce her to the bag.  It was the earliest example of the "brain lock" we're seeing now.  Get her to think past it.  Get her to tune in from the saddle on both sides. Spend equal time and more time working her and resting her in saddle. If possible 2-3 hours every session. Work ethic. Use her brain. Keep calm at all times. Trust. If she bolts left and gets dangerous, jump off and lunge her to the right. Really use her mind and body.  She's half-checked out.  Check her back in."

There's something in me that can't quit on her saddle training.  Yet.

Today, I went out early, determined to get my 2-3 hours with her.  I did everything I made note of last night.  Everything.  When we went counter-clockwise around the arena, she bolted left.  But this time, I thought, I can't fight with her.  She is not a horse that likes to fight or can be influenced that way.  Instead, I petted and rubbed her on the right side. (Like Rebecca had shown me to do.)  She calmed down and stopped bolting and we circled back to the fence and continued straight. Then, when I stopped rubbing, she'd go for a while and then bolt again, and I'd rub her on the right side and bring her back around.  It went on and on like that.  I kept experimenting to see what aspect of the rubbing her right side was calming her.  I found that anything I did--talking, touching, even just bending over to the right and then bending her head to see me (an eyelash) equally calmed her as long as it got her attention on the right side.

I don't fully understand what's happening. Last night, the arena was darkish and she originally bolted in the scarier part of it. (When I say bolt, it's more like a hard pull to the left and then reversal of the circle.) Does she have a vision problem?  Is she just extremely left dominant? I think so.

We had a great session.  I didn't feel unsafe at any point in it.  We worked (at a walk) and rested and worked and rested. Nothing strenuous. Toward the end, I experimented with singing to her as a form of "being with her" and, oddly enough, it stopped all the bolting.  I sang her a song I wrote a few weeks ago--Hiding Place.


I teared up as I rode and sang to her--which made it hard to see, so I don't recommend crying and riding--but I was overwhelmed with the thought that I have to be the hand that Leah can trace. A hand of strength, kindness, mercy, protection.  She is fearful and the reason she's comforted when I stroke her or talk to her on the right is because she sees me there with her.  For now, she needs that.

I don't know where this will lead us, but this is the path we're on.  One step at a time.  Just me and her now.