Taming Wild Movie & the Good, Bad & Ugly In My Training

I want to give a BIG shout out to the movie, Taming Wild. I finally got to see the whole thing this weekend by Vimeo download, and I loved it!  It's a movie that explores the often asked question (at least on this blog)--do horses really want to be ridden by humans?  But what I took away from it, and thought was even more powerful, is what depths of trust can be achieved when you listen to, and respect, your horse.

Trainer Elsa Sinclair wanted to see what would happen if you took a horse straight out of the wild and did not use ANY tools to train.  That's right, not a bridle, bit, whip, halter or lead rope.  Nada.  Nothing.

It opened my eyes to how much horses really do love humans, but most of us don't have the confidence to trust them back in the same way.  For example, I don't think I would be brave enough to trust my horse minus saddle, bridle, bit, in a new, open situation, like she did at the ocean.  (Although, the good thing is, if you fall, at least you fall in the sand.)

From start to finish, which horse to choose and at which speed the training would progress, Elsa looked to her horse for the answers, and you may be as shocked as I was to see what unfolds between the two of them.  And, there's a cute little surprise about nine months into the process, too.

A must see for all horse lovers.

The Good, the Bad, and the Ugly of Training.

Things have been going along as normal in the training of Leah and Beautiful Girl.  I had a lesson with Leah on Tuesday (Day #13 of the Challenge), and she was doing so well at the walk, we were able to spend a good portion of the lesson on the trot.

I was told to ask her to trot and then pull her into a run rein stop and just hold it until she would stop on her own.  I had already discovered, from working with her earlier, she wanted to move.  She was having a hard time standing still...and it took her a long time to come to a stop.  It felt like we circled for 2 or 3 minutes before I got a stop.

That was disappointing to me.  One of the things I loved about my first green horse/baby, Tanner, was that when he was pulled around to a one rein stop for the very first time, he circled once and knew to stop.  I remember my trainer saying--"He's a smart horse!"

I feel like that says Leah is not connected enough with me. 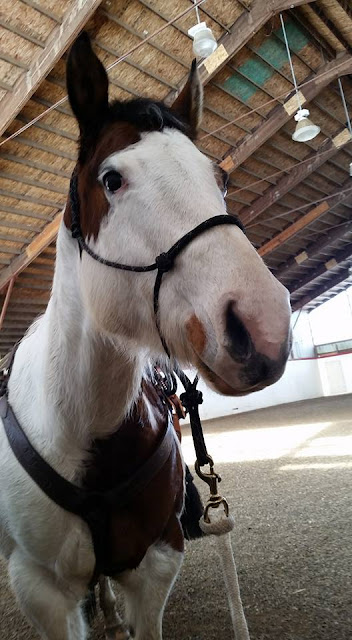 Maybe it also says she'd rather be home and is tired of being trailered off to lessons.

Yesterday, I took her to Riverside State Park Equestrian Area because they have a big, beautiful arena and round pen. 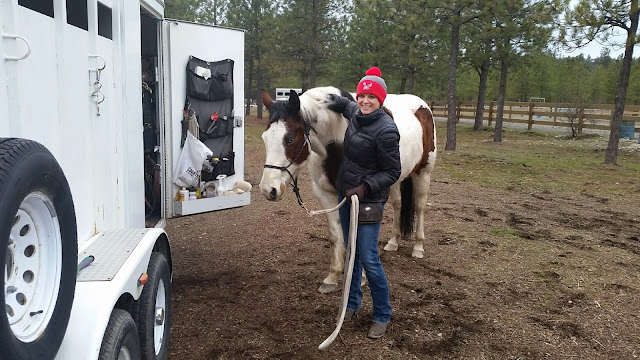 Before we left, she started rocking around the trailer and pawing the front really hard.  She had been doing more and more of that recently and I knew it was building to an "issue".

When we got to the arena, we worked from the ground until she would tune into me fully (rather than the other rider and horse in the round pen.  There was a woman working with her own green horse and it was bucking around and made her jump off.)  When Leah tuned in, I went ahead and got on and worked with her at the walk.  When I felt she was doing well at the walk, we advanced to the trot.  Trot meant GO, so we did the one rein stop.  She stopped a little sooner than the previous Tuesday, but not by much. The next time we tried, she gave me a really nice, engaged trot that lasted about a minute.  However, the third time I asked for it, she started to swing her head a bit and grind on her bit (she grinds her teeth when she's warning you.)

So, we went back to the walk and then ended the session on a positive note. 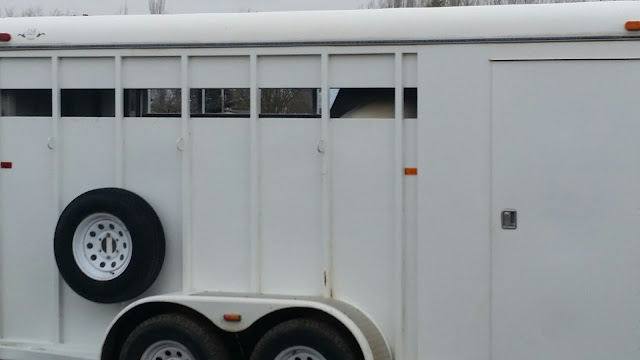 When we got home, I left her in the trailer to rest while I cleaned stalls.  And, today I'm going to go out and put her in the trailer and leave her there until she settles...without going anywhere.  I've GOT to get on that trailering issue before it becomes something very dangerous.

So, that's the good, the bad and the ugly of our week in training.  I find it hard to divide my time between three horses and I sense a lack of connection with all three when I do.

Is it possible to be connected with three?  I don't know the answer yet.
Posted by Linda at 8:23 AM