It's been a few days, so I can write about this from a distance now.  Every so often, it seems, we are faced with a nightmare scenario with our horses--no two of which are exactly alike.  We may plan for Nightmare A, but Nightmare A.25389 is what we get instead.

Let me start from the beginning.

On the 11th day of the 100 Day Horse Challenge, I worked with Beautiful Girl on going over poles.  She had such an acute awareness of where she was putting her feet and such a fluidity over the poles, I thought, I have to get this on video.  However, when I started taping her with my phone, Beautiful saw, or felt, the disconnection and used it as an opportunity to pull back.  That set in motion about a half hour of working together, culminating in a wonderful, willing partnership.  I jogged with her at  my side, and she would stop on a dime when I stopped, keep my pace, everything I could ask for in connectedness on the ground.

It was going so well, I thought let's try some trailer loading.  Off we went to the trailer, which we've been practicing a little bit every time we train.  I stand to the side and ask her to move into the trailer exactly as I would ask her to move out in a circle.  She has been doing this for me with  no problem.  She usually steps right in, looks around, smells the smells--then slowly exits off.

The day of the nightmare, we were doing so well, I figured we should go all the way in.  We did.  She didn't even hesitate for a second.  Once in, she was as relaxed as she was on the ground outside.  There was no sign of any concern on her part.  (Of course, she wasn't tied in moving down the road, either, but it was great progress.)  She backed out of the trailer equally calm and willing.

Which led to our 3rd training obstacle, tying.  I tied her a couple stalls down as I cleaned her stall.  She was tied to one of the barn support beams that we have a metal loop drilled into and then a Blocker Tie Ring attached to that.  Her lead rope was through the Blocker.

Well, as I was cleaning, I heard her pull back.  I ran out of the stall and over to her--or, at least, I walked fast, trying to keep the atmosphere calm.  I saw the stall door open and she was attached to it with her cheek squished--and she was pulling back with all her might.  I reached up to the Blocker, but it was slack.  I looked down at the door, and the cheek portion of her halter was stuck on the metal pin of the gate latch.  I remained calm and tried to loop it back over, but it was too tight with all her weight against it.  I didn't have a knife on me to cut it.  I couldn't get behind her without possibly scaring her more.  All I could do was talk quietly to her and hope she'd listen, relax, and come forward.

"Beautiful," I said, "It's okay, girl.  It's okay."  And, would you believe it, she listened!!  She released just a little tiny bit and I was able to get the halter off the pin. 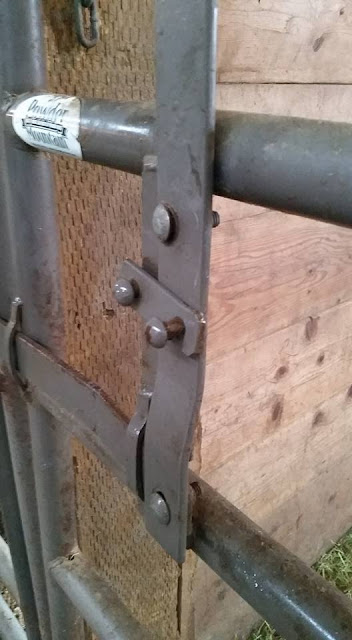 After that, she stood as calm and quiet as she ever had, but still curious and connected.


(The halter--you can see it is stretched out in the cheek portion.) 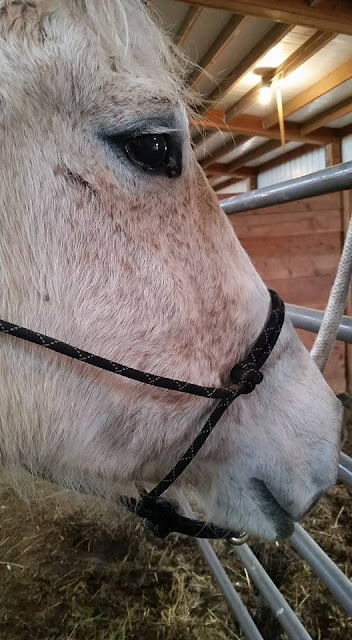 What did I learn from this?

1.) Never tie her in front of that particular stall because she is a smart curious horse and was probably trying to unlatch it--she had done it several times before--and even itch herself on the pin--thus, setting her up for that catastrophe.

2.) Always carry a knife with me in my pocket.  (My trainer from years ago had told me that already).

3.) No matter how hard you plan, when working with horses, anything can happen.

4.) Working with our horses on a regular basis does more than just "train" them, it helps to build the kind of trust that may be called upon in an emergency.  If I hadn't been working with her for the "Challenge", she would not have calmed down enough to get her free and the outcome could have been much different.


I was a lucky cowgirl last week, and I'm heading out there today for some more!
Posted by Linda at 10:47 AM